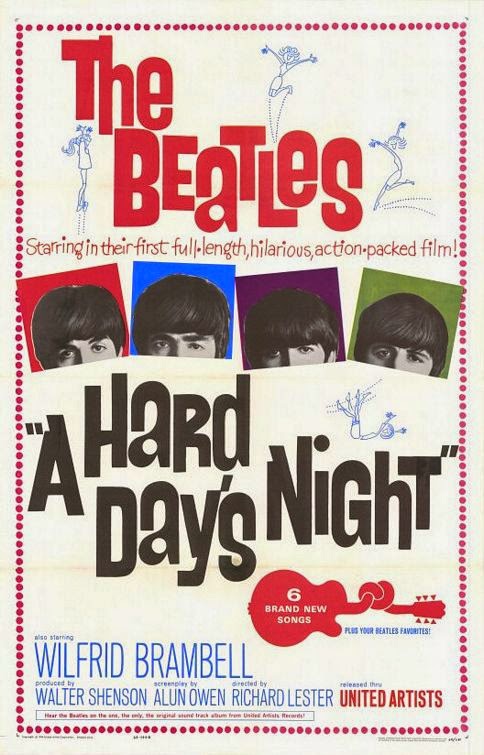 I certainly understand the importance of the Beatles to the evolution of rock & roll music, and I can recognize and appreciate the band's singing, playing, and songwriting talents. The honest truth is, though, I can't remember the last time I intentionally listened to a Beatles song, let alone an entire album. When it comes to sixties British Invasion rock bands, I tend to prefer the harder edged sounds of The Kinks, The Stones, The Who... even The Animals. But when it comes to rock & roll movies, none of them ever made a movie as innovative or enjoyable as A HARD DAYS NIGHT.

Director Richard Lester caught the attention of the Beatles with a comedy short he had done for Peter Sellers and Spike Milligan, and A HARD DAYS NIGHT is essentially a zany comedy in that vein interspersed with lip synched musical numbers. The plot is minimal – the band (John Lennon, Paul McCartney, George Harrison, Ringo Starr) is at the height of British Beatlemania, trying to dodge crazed fans long enough to play their gigs, including a big TV show appearance. Throwing a monkey wrench into things is Paul McCartney's grandfather (Wilfrid Brambell). He gets in trouble himself gambling and womanizing, as well as stirring up tension in the band.

NIGHT is a great looking film, and its crisp black and white cinematography looks almost freshly minted in this restoration. Some of the jokes are either too dated or too British to register with modern American audiences, but the gags come fast and furious enough that it doesn't really matter. You may be scratching your head for a moment, but you'll be laughing soon enough. As for the performances, it is a shame we don't get any actual live music. While the music may be lip-synched, the shots of the audience are from real live shows, making this a valuable time capsule of just home much mania there really was in Beatlemania.

Lester was given an award by MTV for being the “Father of the Music Video”, and it's hard to argue with that. He basically invents the language that would be used by countless others here. Some of the freshness may have diminished through decades of imitation, but few music videos or rock movies display the same level of quality filmmaking seen here. 4 out of 4 stars.
Posted by Bob Ignizio at 12:07 AM