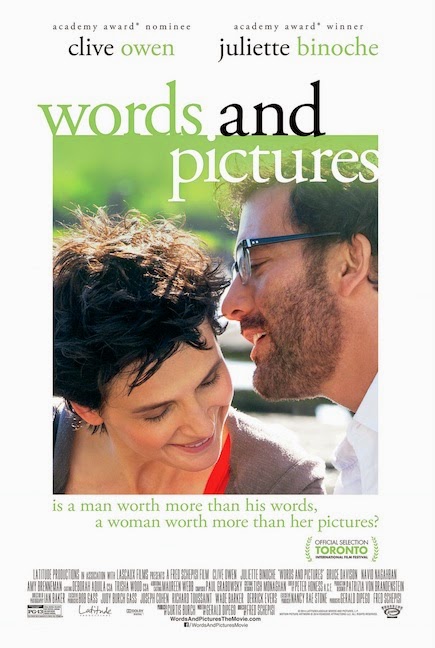 Is a picture really worth a thousand words, or does a well turned phrase have a power beyond any image? Can one time literary star turned alcoholic English teacher Jack Marcus (Clive Owen) use this contrived conflict to save his job and win the heart of Dina DeiSanto (Juliette Binoche), a beautiful but bitter art teacher with arthritis? Can Jack reconnect with his estranged son and see past his own biases to deal with a case of sexual harassment perpetrated by a favorite student? Can Dina find inspiration and a new way to paint despite her debilitating illness? Most importantly, can WORDS AND PICTURES effectively combine all of these plot threads into a satisfying whole? I leave it to potential viewers to find the answer to most of these questions for themselves, but as to the last, the answer is a resounding “no”.

If I were to review this film using words, “cliched”, “hackneyed”, and “disposable” would be a few likely adjectives, along with “cluttered” and “unfocused”. Were I using pictures for critique, I could paint just about anything provided it was by the numbers. Which is kind of sad, given how few movies are made in which good actors like Owen and Binoche get the chance to speak anything resembling real dialogue while engaging in actual human interaction, as opposed to running from giant CGI robots while delivering shouting things like, “look out,” or “grab my hand!”

Sad though it may be that WORDS AND PICTURES isn't better, it does have some redeeming qualities. The best thing the film has going for it is the chemistry between Owen and Binoche. Very little about this film feels believable, but their rocky romance works because the actors manage to sell it even at its most cliché-ridden. The central conceit as to whether words or pictures are the more effective means of communication feels kind of silly from the get-go, but it is at least an attempt to get audiences to think about something deeper, so I can't be too hard on the film for that. And as formulaic as the plot is, there is at least some witty dialogue and a nice dry sense of humor.

Given that this is a film that sets out to essentially be cinematic comfort food, the clunky, borderline insensitive manner in which it film treats the sexual harassment subplot is a glaring misstep. The harasser gets his comeuppance, but intentional or not, it feels as though the movie doesn't take this misogynistic stalker seriously. In fact it practically says that all the victim need do is humiliate her harasser back and he'll just go away with his tail between his legs. Sadly, such is not always the case in real life. Aside from the poor handling of the material, the subplot just doesn't add anything to the overall film.

Veteran director Fred Schepisi seems lost in Gerald Di Pego's cluttered screenplay, never quite knowing which of its many plotlines to focus on or how to make the film flow. Certainly there are films out there far more deserving of a critical flogging than this one, but at times mediocrity can be as galling if not more so than utter awfulness. Still, the lead performances and the humor, combined with the fact that this is an all too rare mainstream film being targeted at older audiences looking for something a little more down to earth than giant rampaging monsters or time traveling super heroes, will likely win over some viewers. 2 out of 4 stars.
Posted by Bob Ignizio at 12:01 AM