Welcome to the Jungle (now on video) 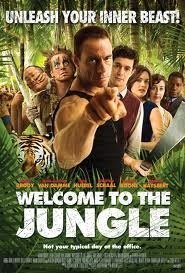 Aging 1980-90s action hero Jean-Claude Van Damme parodies his image in his latest flick WELCOME TO THE JUNGLE. Which would be sad, except he's not at all alone. Many a 1980s-90s action hero has gone this route in cheerful defiance
/surrender to the reality of passing years, thinning hair and flabby midsections. Stallone, Schwarzenegger, Segal, Bruce Willis - all went into self-spoof with varying degrees (Willis, who was doing light comedy and good dramatic bits all along, just rolled with the times gracefully). I think mainly Chuck Norris, Wesley Snipes and Jet Li really avoided full-on goofing themselves, though Norris inspired so many Chuck Norris jokes he might just as well have.

And, when Van Damme did indeed portray himself as a has-been Belgian action idol caught in a bank hostage crisis in 2008's JCVD, critics actually loved it. And, as we all know in movies, when something works one time (like kickboxing), Van Damme (or Van-damn near anyone else) does it again.

In director Rob Meltzer's middling WELCOME TO THE JUNGLE, the office employees of a product-packaging corporation are forced to embark on a survival-retreat as a bogus "team building" exercise that goes badly wrong. Fearing their jobs are at stake, the cubicle minions fly to a tropical island, to persevere in survival-game exercises under direction of self-proclaimed ex-commando Storm Rothchild (Van Damme).

When their plane pilot dies of a heart attack and Storm succumbs to a tiger attack, the staffers
have to fend for themselves, torn between the tribal chieftain-ship of flashy alpha-jerk senior VP Phil (Rob Huebel) and the guy whom Phil has stepped all over throughout, the more level-headed, smarter, milquetoast label-designer Chris (Adam Brody).

The result is a very broad (but not very expensive) spoof of Lord of the Flies (it helps if you've read
the book, but given that this is America, it's most likely young student viewers have just
scoped out the two movie versions; I mean, the book is more than a hundred pages!). The office types
discard trapping of civilization with surpassing ease, smearing their faces with war paint and
worshiping Phil as a bloodthirsty god (as he demands). With Van Damme threading in and out of the narrative somewhat haphazardly. But he's in it more than one would expect, given what he was likely paid.

WELCOME TO THE JUNGLE is not at the anarchy level of a Troma title (despite fleeting toplessness, drugs and silly violence) but still more eye-rolling farcical than either the US or UK TV versions of The Office. Which nonetheless drew more blood out of corporate-predator society. So did 2007's SEVERANCE, a gore-farce from the UK with a distantly similar plotline that had a much sharper edge. But no Van Damme.

The Muscles From Brussels is onscreen a lot in the DVD/Blu-ray, discussing the production at length (and playing with a walking-stick insect found on the jungle set), while actor Huebel continues his
egomaniac Phil persona in generous and funny, freeform behind-the-scenes extras. If you're going to invest a night/rainy day in this silly B-pic, those are worth checking out as long as you're on board.
(2 1/4 out of 4 stars)