Review by Ric Nimrod with an introduction by Bob Ignizio 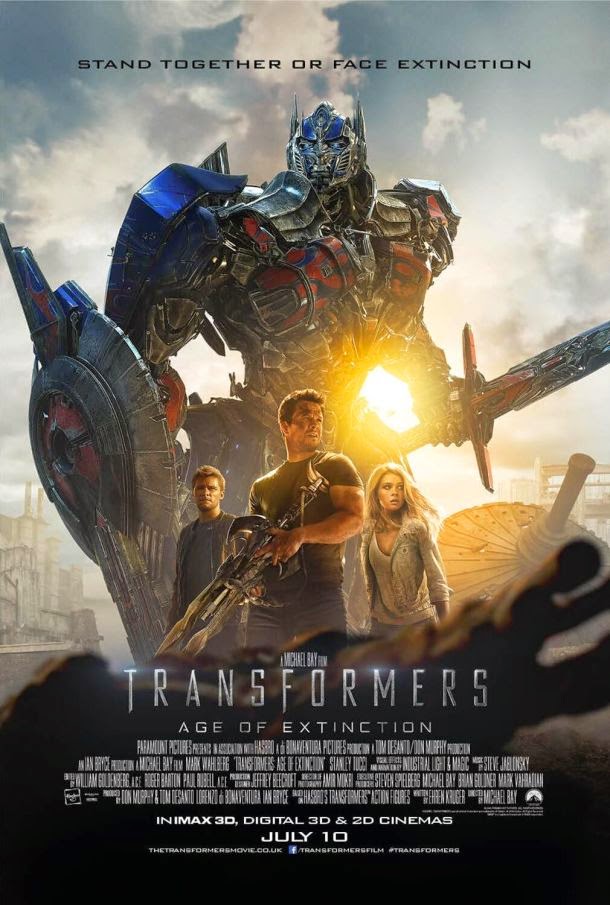 I went to see TRANSFORMERS: AGE OF EXTINCTION this past Friday at the drive-in with the intention of reviewing it. It was not to be. The film beat me down. After two hours of mind numbing noise, hackneyed cliches, and general stupidity, I had enough. There was still 45 minutes of this crap left to go, and I just couldn't take it any more. And with that decision, I lost all right to give a full review with a star rating and everything. I figure it was worth it.

Thankfully, my friend Ric Nimrod (not his real name, obviously), guitarist/vocalist for Akron area rock band The Giggitys, had more stamina than I did. He recognizes the movie for the crap that it is, too, but was somehow able to get enough enjoyment out of watching it with his 5 year old son to make it through to the end. Although he describes the film as “unreviewable”, I think he does a pretty good job of conveying what the experience was like (at least as far as I got with it) and pointing out the reasons why, although it's crap, some people still like it. So here's Ric's review, taken from his facebook post with his permission:

FIRST, if you are on board with the Bay movies then this one is the same thing. In fact, it is not even the worst TF movie. I liked it, but then I like all of them to some degree. LIKE being the operative word. It doesn't always make sense, the FX are huge and sparky, the chicks are hot and the cars are shiny. Everything I want in a film franchise based on TOYS.

2 Reasons I dig Bay as the director of these flicks:

1- MOST IMPORTANTLY I love how it pisses off the first (and most irrelevant) generation of TF fans. The more it pisses them off, the more I LOVE the franchise. IMO, if you are an adult and give a crap about the mythology of a TOY LINE then you are failing at life. I love how, after 4 movies he doesn't give a shit about what you fan boys and girls think at all, he makes Bay movies and these just happen to have cars that turn into robots as the stars.

People bitch about the racism in the TF movies and he puts his stereotype in captivity, all the while spouting off about being persecuted by 'the man' in that urban jive talk that we know all robots have.
People complain about the foul language and Bay tosses the 'F' word in. Nerds complain about Optimus Prime killing people, and Bay makes him more blood thirsty than ever! Parents complain about the violence and he kills one of the main characters right on screen and in the first act. The guy doesn't give a FUCK about your silly toy line and I love that about him.

Also, the Budweiser logo shows up so much in this movie you would think they paid for the whole damn thing. It is EVERYWHERE. You see more Bud logos than tanned, 20 year old female legs in this movie... and for ANY Bay movie, that is saying a lot.

The movie means nothing. My 5 year old loved it and THAT is who is supposed to love it. It is a toy commercial... it is almost non-stop action and no better or worse than any of the other movies in this franchise. It is not even SUPPOSED to be something of substance like the Marvel Movies, The X Flicks, Star Wars, Trek or anything else that has a mythology that didn't start with toys.

It was fun, and I have already forgotten what it was about - BUT, I do remember it ended with Optimus Prime heading to Cybertron... so a human free TF movie could be coming. I have no clue how to fit Bud logos and hotties in shorts into a Cyberton-centric movie, BUT, Mike will find a way! 1 ½ out of 4 stars.
Posted by Bob Ignizio at 12:18 AM