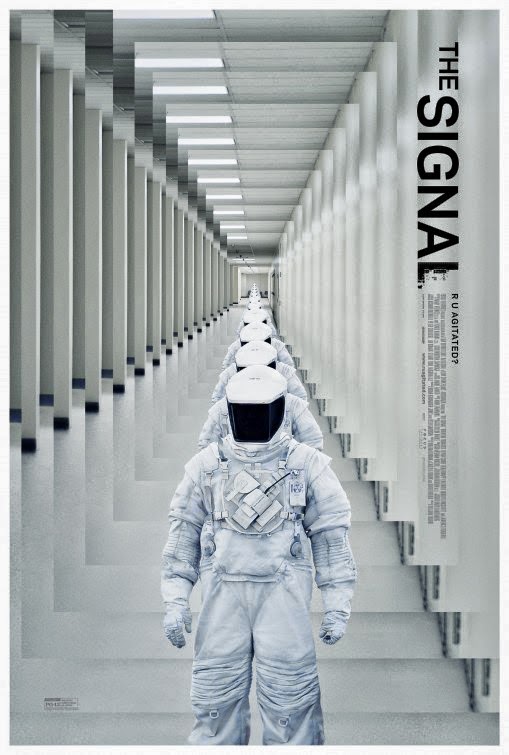 THE SIGNAL is the second feature film from writer/director William Eubank. Eubank’s previous film, LOVE, was a low budget but high on visuals affair. He clearly has more resources available to him here, but THE SIGNAL, like its predecessor, is a beautiful and striking film.

THE SIGNAL follows Nick, Jonah and Haley, three MIT freshmen who also happen to be expert hackers, on a road trip through the West. The students seem to have met their match in an anonymous hacker who goes by the name Nomad. Nomad seems to be able to track every move the students make.

While traveling, Nick and Jonah are tracking Nomad’s location. They realize that they’re just a few hours away and decide to take a detour and pay Nomad a visit. The encounter turns sour and the students wind up in captivity, though we don’t know how.

Of the three students, it is Nick, played with a calm-confidence by Australian actor Brenton Thwaites (who next stars in THE GIVER) that we view the experience through. Nick, Jonah and Haley are confined in a facility where everyone else is wearing large hazmat suits and space-like helmets – you get the idea that in the process of being taken captive our characters have become contaminated. The leader at the facility is Damon, played by Laurence Fishburne (THE MATRIX).

Damon interrogates Nick, but in such a playful manner that it never feels hostile. The conversations and interactions between Thwaites and Fishburne are some of the best moments of the film.  It’s in the secret facility that THE SIGNAL finds its footing, striking both a playful and menacing tone. Perhaps the highlight of the film is its dialogue, something sci-fi films don’t always tout.

It’s easiest to call THE SIGNAL a sci-fi film, but to force it into one genre isn’t fair. The movie jumps from road trip film to horror film to sci-fi film with no shortage of comedy mixed in between. The movement between genres surprisingly never feels tiresome or desperate but rather, keeps you guessing and off kilter.

Where the film ultimately falls short is in the third act. For my money, the first two acts are formidable pieces of filmmaking. Sadly, the movie seems to rush towards a conclusion after moving at its own, appropriate, pace for most of the film. Certain plot devices are introduced which seemed forced in order to get to the ending.

The ending is something to behold. This is not to say it is either wonderful or horrible, but simply something that will have you thinking on your drive home.

When the film begins, Nomad asks, “R U agitated?” Not in the least! In the end, THE SIGNAL is a respectable entry from an up and coming filmmaker. One that puts performances, visuals and dialogue as it’s highest priority.

Eubank claims to be a TWILIGHT ZONE fan, a series respected for its endeavors into the weird while also providing audiences with beautiful stories and haunting writing. Eubanks doesn’t approach Rod Serling territory in THE SIGNAL, but he might be well on his way.
3 out of 4 stars
Posted by Joseph Anthony at 12:07 AM