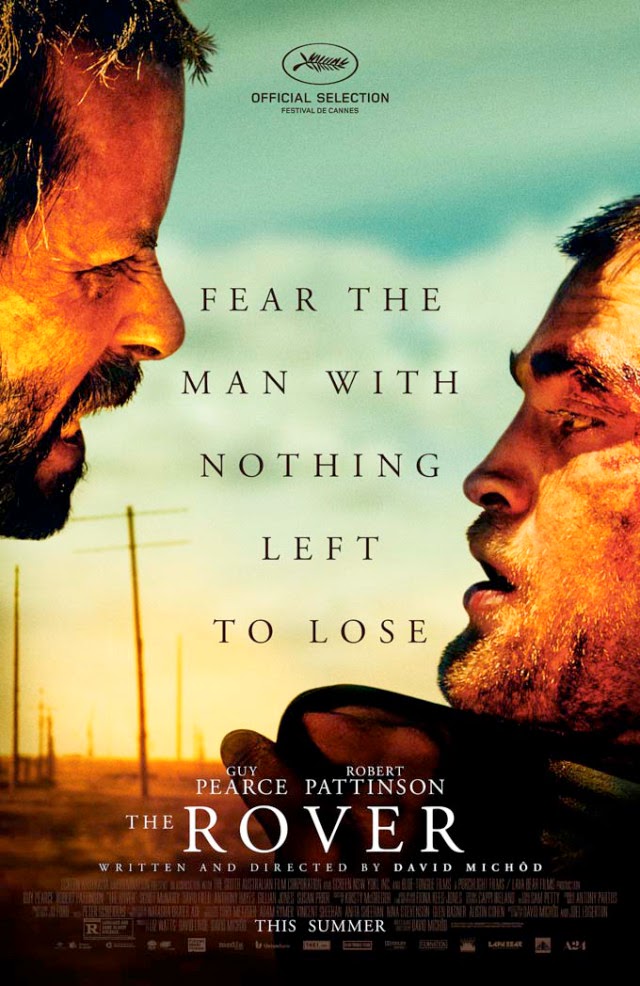 About midway through THE ROVER, the dystopian Australian feature film by David Michôd, a mentally challenged character named Rey says, “Not everything has to be about somethin'.”


That pretty much sums up the storytelling philosophy of Michôd and his co-scenarist, Joel Edgerton. It's as empty narratively as its post-apocalyptic desert landscape. The film is set in a bleak, battered Australian outback “ten years after the collapse,”presumably the worldwide economic kind. People from all over the world have moved to Oz and are living in armed, paranoid survival mode, The American dollar, surprisingly, is the only currency they trade. (The obvious resemblance to MAD MAX, by the way, was rejected by Michôd, who said, a little hubristically, "You put cars in the desert in Australia and people are going to think of MAD MAX, and with all due respect to that film... I think THE ROVER is going to be way more chillingly authentic and menacing.")

The protagonist of this maddeningly minimalistic film is Eric (Guy Pearce), a laconic ex-soldier whose car is stolen by a car full of fleeing felons. Angry Eric pursues the thieves intently, shooting and killing a lot of people along the way, including a midget from a traveling circus. Before stealing Eric's car, the thieves have left behind one thief's seriously injured younger brother, Rey (TWILIGHT's Robert Pattinson). Eric meets up with Rey, gets his injuries treated by a woman doctor, and forces the slow-witted young man to lead him to his brother, Henry (Scoot McNairy) and his accomplices.


On the road to the bandits' hideout, the duo evoke Of Mice and Men, the earnest Rey trying to converse with Eric, who scarcely responds. Pattinson's nuanced performance as the film's lone sympathetic character adds some verve and humanity to this parched, languid desert drama.


It's hard to understand why people write movies with so little narrative content; perhaps it's a way of appearing “arty.” The story is so nihilistic – everyone just kills everyone – that we can't latch onto anything emotionally. In a lawless landscape, “it just doesn't matter anymore,” says Eric. So is there any reason to care?

I heard John Waters say in an interview recently that if people come out of a movie saying, “The cinematography was wonderful!,” it wasn't a good movie. And so, Natasha Braier's cinematography is impressive, and I can't say enough good things about Anthony Partos' post-industrial score and Sam Petty's delightfully eclectic song tracks. It's too bad they aren't in the service of a more satisfying film. 2 out of 4 stars.