The French Minister (June 20th and 21st at the Cleveland Cinematheque)

[THE FRENCH MINISTER screens Friday June 20th at 5:25 pm and Saturday June 21st at 7:10 pm at the Cleveland Cinematheque.] 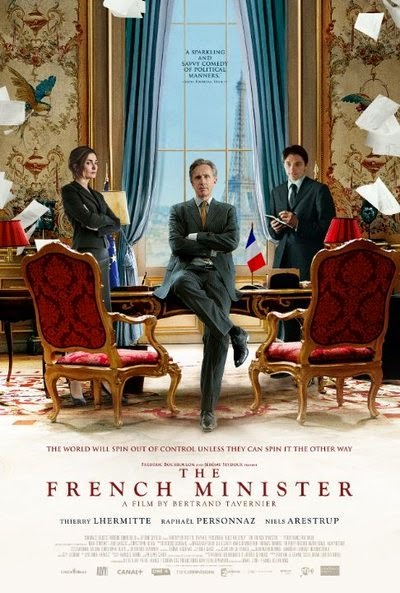 Although Bertrand Tavernier’s THE FRENCH MINISTER is based on a graphic novel (“Quai d’Orsay" by Antonin Baudry who worked under French Foreign Minister Dominique de Villepin during the build-up to the Iraq War), fans of British political satirist Armando Iannucci (IN THE LOOP, HBO’s “Veep”) might assume it’s a Gallic riff on Iannucci’s inside-the-beltway comedies.

Perhaps it’s a cultural thing, but to fully appreciate Tavernier’s farce you probably need to have a passing familiarity with the intricacies of France’s current political system. And either be a speed reader or fluent in French because the subtitles fly by so fast and furiously you could get whiplash trying to keep up with all the bon mots and verbal ripostes ricocheting through the air like linguistic fusillade.

Since I’m none of those things, I ultimately found the movie more fatiguing than funny. Yet because Tavernier is a master filmmaker, there’s a lot to enjoy here as long as you keep your expectations in check. Francophiles will have a field day.

Arthur Vlaminck (Raphael Personnaz), the film’s ostensible hero and audience surrogate, is a recent grad of France’s tony National School of Administration. He lands an interview with French Minister Alexandre Taillard de Worms (Thierry Lhermitte in a tour-de-force comic performance) and promptly gets hired as his new speech writer. Or re-writer since Arthur spends most of his days, nights and weekends revising, amending and generally finessing speeches that countless other government apparatchiks had a hand (some heavier than others) in composing. Finding the perfect arcane literary quote to gussy up a boilerplate speech is apparently part of Arthur’s job description, too.

The movie’s central running gag—whenever de Worms bursts into a room, any stray piece of paper lying about immediately takes flight and soars into the air—grows progressively less funny over time. Also, Tavernier’s repeated use of split screen to convey the hustle and bustle of Arthur’s workaday existence isn’t nearly as clever as he seems to think. The rapid fire dialogue, and its breathless delivery by an ace cast, remains consistently amusing throughout, however.

Tavernier’s indisputable, indispensable ace in the hole is redoubtable screen veteran Niels Arestrup (A PROPHET) as de Worms’ seen-it-all head of staff. Arestrup can steal a scene just by cocking one of his caterpillar-fuzzy eyebrows or heaving a sigh of bemused exasperation at the cacophony threatening to drown him at any moment. In a movie that’s maybe a tad too frenetic for its own good, Arestrup is the calm at the center of a roiling storm.

Tavernier himself is a bit of an odd duck. Like the New Wave directors (Truffaut, Godard, et al) who preceded him, Tavernier got his start as a film critic. Wildly prolific and well-nigh uncategorizable, his oeuvre is both impressive and frustratingly hard to pigeonhole. It’s a body of work that spans everything from a (Jean) Renoir-esque pastoral (A SUNDAY IN THE COUNTRY), futuristic sci-fi (the bilingual DEATH WATCH), a post-Katrina New Orleans noir (IN THE ELECTRIC MIST starring Tommy Lee Jones), a three-hour epic about the Nazi occupation of France during WW II (SAFE CONDUCT), a sultry jazz tone poem ('ROUND MIDNIGHT) and even an Alexandre Dumas romp (REVENGE OF THE MUSKETEERS). He’s literally done it all in a four-decades-and-counting career. In that respect, Tavernier is a lot like American critic-turned-film-director Peter Bogdanovich who followed THE LAST PICTURE SHOW with a G-rated screwball homage (WHAT'S UP DOC?), a Henry James adaptation (DAISY MILLER) and an Art Deco Cole Porter musical (AT LONG LAST LOVE) back in the 1970’s.

Considering Tavernier’s passion for American movies (he wrote several books on the subject before directing his first film, THE CLOCKMAKER, in 1974), it’s safe to assume that THE FRENCH MINISTER was intended as his valentine to vintage Hollywood screwball comedies like HIS GIRL FRIDAY and BRINGING UP BABY. While Tavernier might not be another Howard Hawks (who is?), he shares Hawks’ chameleonic ability to continually reinvent himself as an artist. No wonder he’s still going strong at age 73. 2 1/2 out of 4 stars.

Posted by Milan Paurich at 1:53 PM