The Connection (June 13th and 14th at the Cleveland Cinematheque)

[THE CONNECTION screens Friday June 13th at 7:15 pm and Saturday June 14th at 9:00 pm at the Cleveland Cinematheque.] 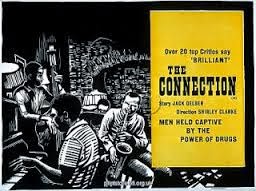 I'm sure we whose hearts have been broken by movies for so long have undergone this experience: finally getting around to seeing some "masterpiece" of world cinema only to find it lacking. Primitive, inert, perhaps ahead of its time, sure, but only a little bit interesting and unduly hyped. In my POV that's often - not always, but often - happened with pics in the "experimental" and foreign realm. The big heartbreaker for me was Jean-Luc Godard's BREATHLESS. Some Godard titles I have found quite diverting. And you'll get no argument from me that Jean-Paul Belmondo is an icon (he outgrossed E.T. - THE EXTRATERRESTRIAL when those two went head to head in France) but that grainy talkfest (BREATHLESS, I mean) just bored me silly. This is the masterwork that ignited the French New Wave and changed cinema forever? I don't get it!

That was many years ago. Perhaps if the BREATHLESS disappointment had put me off movies for good (like a nice neighbor-lady of mine, who went to a now-vanished Independence movie house to see the Japanese sci-fi import THE MYSTERIANS, then went years without seeing another movie, ever), my life would have taken a different path entirely. Perhaps I might have learned a valued and respected career skill. Perhaps I would have been able to earn a living. Perhaps I'd neither know nor care how well Belmondo's ACE OF ACES stood up to Spielberg's E.T. in 1982. Perhaps girls would have spoken to me. Okay, well, maybe that last one's a bit farfetched.

But there is one much talked-up, seldom-seen masterpiece that came through and lived up to its revered critical reputation. Man, daddy-o, where has Shirley Clark's legendary THE CONNECTION been all my life? Why didn't one of Cleveland's local TV stations own a celluloid print to rerun on their Late Late Shows in the 1970s, like they did all the John Wayne and Martin & Lewis movies I wound up watching hundreds of times? I'll bet even as a snotty kid, not even being able to "get it," especially the drug references (I was a pretty boring snotty kid, always thinking if I avoided drugs life would go well for me; guess I was a stupid, boring snotty kid to boot) I might have stayed up well past bedtime, fascinated.

Technically the 1961 production is a filmed play, based on an Off-Broadway stage piece by a certain Jack Gelber, about which I know nothing (if there's one thing I can be grateful about being a sad, aging movie nerd, it's that I avoided being a sad, aging live-theater nerd). However, the mostly real-time narrative adapted fiendishly well to a cinematic mise-en-scene, a "mockumentary" long before the term was coined.

A BLAIR WITCH PROJECT-like prologue informs us that a director of photography named JJ (Roscoe Lee Brown) is presenting the following footage "as honestly as I could" from an abandoned project by AWOL director Dunn (William Redfield). We are taken, courtesy of superb B&W lensmanship, to the single-set apartment of a whining NYC homosexual named Leach (Warren Finnerty), which has become a crash-pad and informal jam-studio for a bunch of heroin addicts, mostly jazz musicians who have hooked up with filmmaker Dunn via old Harlem school ties to JJ.

Dunn aspires to do some sort of filmed expose on the lives of New York City junkies, and has forked over money personally to show them waiting for the arrival of their "connection" with a fresh supply of smack. But Dunn is a preppie-type square, uncomfortable in this environment of hipster addiction, self-destruction and rebellion. One by one the men, in between naps and jam sessions, unload defiantly into the camera about their choices, refusing to be the sort of passive victims Dunn might want them to be. Though the drug supplier is also supposed to show up with girls, he brings instead an oblivious Salvation Army evangelist, a dotty old lady named Sister Salvation. It takes her an awful long time to realize she's wandered into a den of iniquity.

Oh, there's lots more, including Leach's contention with a nasty boil on his neck (not the guy's only health problem, by any means), some great jazz riffs, and bracingly provocative language, race issues and imagery for 1961. Gelber's dialogue, even if a bit theatrical, still crackles, and Clark's direction makes use of the mockumentary format in ways that even our present-day filmmakers haven't learned to fully exploit - the interruptions for reel changes, the lighting going wrong, the junkie-actors searching (when they choose to cooperate at all) for which lens they're supposed to be addressing in the two-camera setup.

THE CONNECTION got banned in New York in its day, supposedly for the repeated use of the s-word (oh, is that all?), perhaps explaining its reputation far greater than the number of people who have actually seen it. Check it out today. I'll be very surprised if you're not hooked. (3 3/4 out of 4 stars)