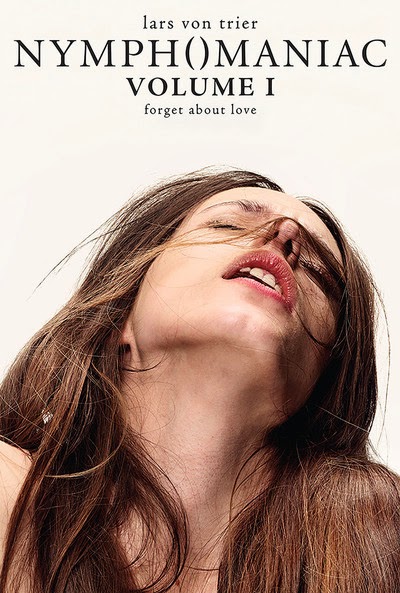 It’s amusing to think what audiences who flocked to softcore cream puffs like DAGMAR’S HOT PANTS, INC. and INGA back in the late ‘60s and early ‘70s would have made of a provocation as
flagrantly transgressive as Lars von Trier’s remarkable NYMPHOMANIAC, VOLUME 1. Would they have been titillated? Scandalized? Amused? Certainly the lines would have been around the block.

In 2014, von Trier’s latest cause celebre will earn most of its domestic coin as a VOD (both parts of NYMPHOMANIAC are currently available on most American cable providers’ “On Demand” services), and only the hardiest cineastes will bother trekking out to see it. If they can even find it, that is. The only area theater brave enough to show von Trier’s magnum opus is Cleveland Cinemas' Capitol Theater. (VOLUME 1 opens Friday, April 4th; VOLUME 2, April 18th.)

The afore-mentioned trivia is supplied by Seligman (Stellan Skarsgard), a good samaritan who rescues the titular heroine (Charlotte Gainsbourg’s Joe) after discovering her lying in an alley near his apartment. After cleaning her up and tending to her wounds—she’s been badly beaten by someone whose identity will remain a mystery until the end of VOLUME 2 —Joe launches into her life story which is consistently ribald, occasionally laugh-out-loud funny and even strangely moving.

“I discovered my cunt as a two-year-old,” she says by way of a preamble, and things don’t get appreciably more sugar-coated as the tale progresses. A Daddy’s girl (Christian Slater plays her mensch of a dad; Connie Nielsen is her distracted mother), the precocious Joe (Stacy Martin in flashbacks) soon finds a kindred spirit in classmate B (Sophie Kennedy Clark). Both girls profess to be rebelling against a “love-obsessed society” and consider sex, preferably anonymous and impersonal, a schoolyard game. They even begin a contest to see who can hook up with the most number of men.

Reclusive bookworm and self-proclaimed virgin Seligman remains remarkably unfazed by
Joe’s amorous adventures. Because of his encyclopedic knowledge and wildly eclectic frames of reference, he’s able to find metaphors in, and bring symbolic meaning to, her biography. (Cue the voluminous fly-fishing analogies.)

Von Trier has prided himself on remaining an enfant terrible, even into middle-age. His regrettable comments about Nazis at a 2010 Cannes Film Festival press conference were probably responsible for MELANCHOLIA, his crowning achievement to date, not winning the Golden Palm that year. What’s particularly fascinating about NYMPHOMANIAC, VOLUME 1 is how frequently, despite its singularity of vision (there truly has never been another film like this), I was reminded of the works of other “controversial” auteurs, particularly Stanley Kubrick and Mr. “Malignancy of the Human Heart” Roman Polanski.

Novelistic—diaristic really—in texture, and with a density of thoughts, ideas and feelings percolating throughout, NYMPHOMANIAC feels like another von Trier masterpiece and the first major work of 2014. (By my reckoning, he’s already made two legitimately great films:  BREAKING THE WAVES and MELANCHOLIA.)

Since this is only the first half of von Trier’s overarching narrative, I’ll reserve passing final judgment until reviewing VOLUME 2.  In the meantime, see VOLUME 1 wherever and however you can. 4 out of 4 stars.