Lost in Thailand (now on video)

[LOST IN THAILAND is now available on home video.] 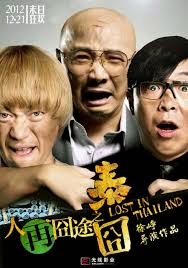 I've been very bad this year about going to see the mainstream blockbusters, the sort of prefab Hollywood "event" product that rules for a weekend. I didn't even get around to watching the Cleveland-connected DRAFT DAY or CAPTAIN AMERICA: THE WINTER SOLDIER, sorry. And the rest of the commercial junk (comic-book superhero sequels, basically) has gotten along without me in the audience. Which is just fine. Movie tickets are out of my range anyway.

Still, even as I keep a steady intake of decent-quality alt-cinema, foreign imports and documentaries, O my brothers, I confess that sometimes I do wonder what a crummy first-run popular "entertainment" actually still feels like. Verily, I felt a strange pull to want to see TRANSCENDENCE, THE OTHER WOMAN, OCULUS or FADING GIGOLO, just to confirm for myself that I wasn't missing anything.

My jones for PG-13 style proletarian pablum was satisfied unexpectedly by LOST IN THAILAND. I am given to understand that this middlebrow farce was a smash in its native China, amounting to that nation's top-grossing comedy hit to date. And they've got all the jobs and pretty much own America now, so that counts for something. I think it might have even gotten a token release in some USA theaters in 2013 prior to hitting the video racks (our DVD and Blu-ray players all being made in China, of course).

LOST IN THAILAND is actually a cast reunion of a previous comedy called LOST ON JOURNEY, which I haven't seen, but which I understand was a road comedy set during the gigantic annual New Years migration during which Chinese factory workers in the manufacturing centers go home to reunite with their peasant-ish families (an entire Canadian documentary was made on that subject, 2009's LAST TRAIN HOME). LOST ON JOURNEY was popular enough - and Chinese had the moxie to know what "branding" means, Mao or no Mao - that its three main actors subsequently reunited for the bigger, costlier, more hyped LOST IN THAILAND. Here they take different roles (but use their real names, oddly). And lead player Xu Zheng now occupies the director's chair (doing not a bad job at all).

He plays `Xu,' starchy Chinese scientist who has just perfected a fuel formula that promises to extend the world's oil supplies (big deal; in northeast Ohio the gas-pump prices would still go up). His angry wife would rather work on finalizing their divorce, but Xu coldly walks away from the marital crisis to races an estranged business partner to Thailand, to get a crucial patent meeting with a key investor on retreat.

But en route Xu hooks up with off-his-meds loon Wang (Wang Baoqiang), a simpleton from the Chinese lower classes, come to Thailand with a touristy to-do list. Wang's disastrous choices and unleashed-id antic throws stolid Xu off his mission plan time and again. Thailand - both Bangkok and, even more so, the rural countryside - is, of course, the shot-on-location location, seen through Chinese eyes as a riotous, yet laid-back culture, analogous to western stereotypes of southern California.

Thai peculiarities include spooky walk-ons by "ladyboys," incredibly realistic female impersonators (note to self: forget doing the mail-order Asian bride thing after all), a running-joke/cameo by real-life Thai starlet Fang Binbang, playing herself (I do believe she's cast in some current/upcoming Marvel superhero thing), and funny riffs on Thailand's legendary kickboxing subculture.

Though the export-video promos compare LOST IN THAILAND to THE HANGOVER series (primarily because of the Bangkok stuff in HANGOVER 2), China's No.1 smash is really more a time-tested Hollywood road-comedy formula, the one about the fun-loving nut teaching an uptight type to loosen up and enjoy what's important in life. Think DUE DATE, PLANES, TRAINS AND AUTOMOBILES, and probably lots more I can't recall at the moment, going all the way back to IT HAPPENED ONE NIGHT). The routine works for we foreign-devil barbarians; it works fine here, albeit somewhat predictably, right down to blooper-outtakes over the closing credits.

So there, my due diligence to take in a crummy mainstream crowd-pleaser is fulfilled. Watch it yourself and just plug in Adam Sandler, Will Ferrell or some other Not Ready for Prime-Time Players in place of the Sino stars (you just know some Hollywood talent agents are doing that already). And I would not be surprised if LOST IN LAS VEGAS with the same cast is in the works. Shanghai billionaires probably bought the town for a bargain price anyway, just to get around having to file filming permits. (2 3/4 out of 4 stars)
Posted by Charles Cassady Jr. at 1:56 AM