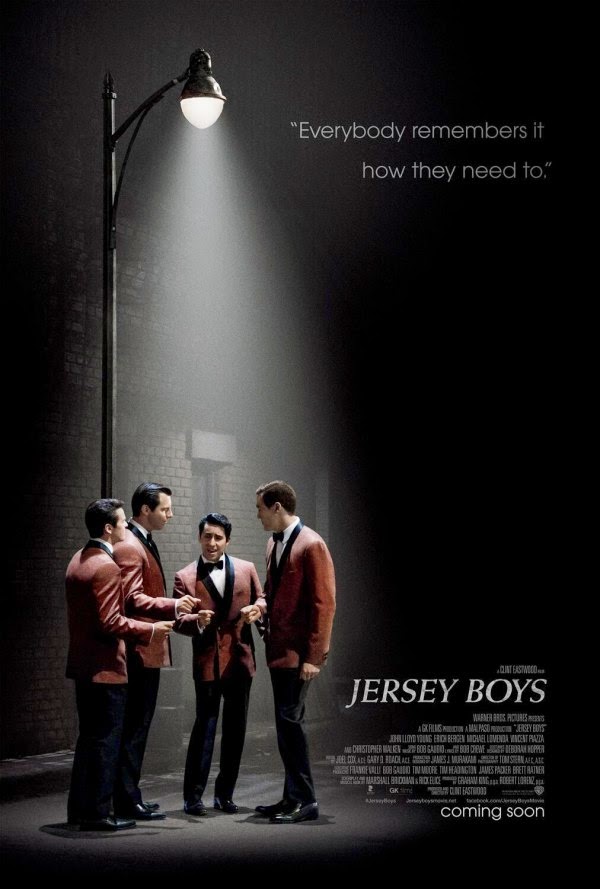 Imagine if John Ford had opted to direct BYE BYE BIRDIE instead of THE MAN WHO SHOT LIBERTY VALENCE. On paper, Clint Eastwood helming a screen version of the long-running Broadway musical smash JERSEY BOYS made about as much sense.

Don’t get me wrong. I dearly love Eastwood and consider him one of America’s greatest living filmmakers. And he’s to be applauded for thinking (way) outside the box by electing to direct his first musical at the ripe young age of 84.


Yet Eastwood’s signature directing style is all wrong for JERSEY BOYS, and this is very much an “Eastwood Movie.” The stylistic tropes (an elegiac tone; deliberate pacing; a muted color palette; and an abiding preference for medium shots over close-ups) that worked so brilliantly in films like MILLION DOLLAR BABY and MYSTIC RIVER are cinematic Kryptonite to JERSEY BOYS.

Since Martin Scorsese clearly wasn’t interested in tackling the project (maybe it was too much inside his wheelhouse), why didn’t the producers ask David Chase? Chase proved as smart and intuitive about classic rock-and-roll in NOT FADE AWAY as he did about Italian-American Jersey boys on “The Sopranos.”

Both skill sets would have served him beautifully here.

Rarely have I seen a movie musical as, well, sedentary as JERSEY BOYS. The camera barely moves, even during the numerous musical setpieces (“Walk Like a Man,” “Sherry,” “Big Girls Don’t Cry,” et al). Who knows? Maybe they were intended as an homage to Sam Katzman-produced cheapies from the early 1960’s like TWIST AROUND THE CLOCK and DON'T KNOCK THE TWIST where the camera remained stationary as it dutifully recorded numbers performed by chart-topping acts of the day.

Because Eastwood is such a masterly director, JERSEY BOYS never feels remotely stagey despite its theatrical origins. Of course, neither did the Broadway version in which the proscenium arch seemed to magically disappear before your eyes as though you were watching a live-action movie. But not being stagey isn’t the same thing as being cinematic. The only time Eastwood’s film truly comes to life is during a rousing production number shoehorned over the closing credits. Most of the time it just feels sluggish and curiously devoid of energy.

Except for Vincent Piazza (best known as Lucky Luciano on HBO’s “Boardwalk Empire”) and a restrained Christopher Walken as Four Seasons member Tommy DeVito and goodfella Gyp DeCarlo respectively, the cast was largely recruited from various stage companies of the show. Everybody (including John Lloyd Young who won a Tony award for his portrayal of Valli in the original Broadway production) hits their marks with precision and neatly scales down their performances for the big screen.

On stage, “Jersey Boys” was electrifying: a propulsively exciting jukebox musical elevated to great popular art in the hands of book writers Marshall Brickman (yes, Woody Allen’s Marshall Brickman) and Rick Elice and wizardly veteran theater director Des McAnuff. The story of the rise and fall (and rise again) of Frankie Valli and the Four Seasons was a snapshot of mid-twentieth century American life (and show business), as well as a microcosm for the seismic cultural changes that erupted in this country during the period. For Baby Boomers like me, “Jersey Boys” was a blast from the past and a fitting memorial for one of the most beloved musical acts of the early rock era.

JERSEY BOYS on film will probably work best with audiences unfamiliar with the original theatrical incarnation since they’ll have nothing to compare it with. If, like me, you’ve already seen and loved “Jersey Boys” on stage, Eastwood’s film just seems superfluous.

Even in its fatally flawed form JERSEY BOYS is still infinitely superior to such recent stage-to-screen translations as MAMMA MIA! and LES MISERABLES. Yet it’s not half as entertaining as the critically maligned 2012 box office flop ROCK OF AGES, which had an aptly sleazy, trashy rock-and-roll vibe. On the basis of his listless film, you’d swear Eastwood had never listened to a rock-and-roll record in his life. Or had any idea who Valli was and what the Four Seasons and their music were all about.

I have too much affection for the material, the music and Clint Eastwood to completely dismiss JERSEY BOYS. It just isn’t the movie I wanted it to be. Or the one I dreamed of while watching the stage version. 2 1/2 out of 4 stars.