It Felt Like Love (June 12th at the Cleveland Cinematheque)

[IT FELT LIKE LOVE screens Thursday, June 12th at 8:10 pm at the Cleveland Institute of Art Cinematheque.] 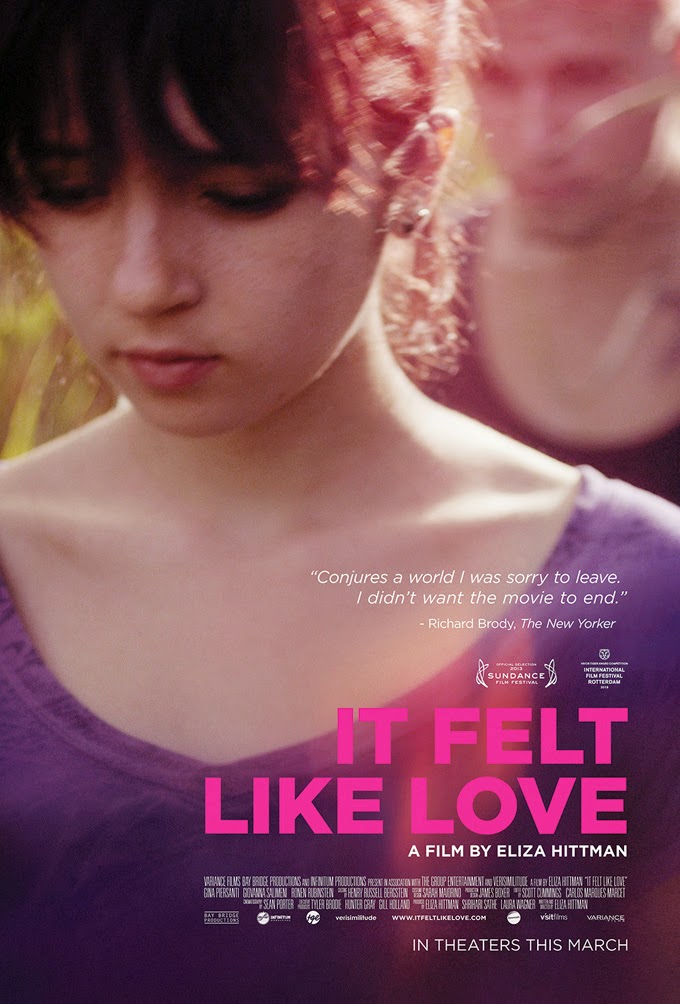 “Just touch it; it’s not gonna bite.” That’s the opening line of dialogue in IT FELT LIKE LOVE, director Eliza Hittman’s strikingly assured feature debut about teenage hormones, peer pressure and the dangers that sometime occur when those factors collide. The “it” is the penis of Patrick (Jesse Cordasco), boy toy du jour of 15-year-old New York City heartbreaker Chiara (Giovanna Salimeni), and the words are spoken in a swimming pool where they’ve ostensibly gone to cool off their mutual heat. Fat chance.

Observing the dynamics—sexual and otherwise—between Chiara and Patrick is Chiara’s slightly younger, wildly impressionable best friend, Lila (Gina Piersanti). Chiara may only be a year older than Lila, but she’s infinitely more sophisticated when it comes to boys, sex and love. Well, maybe not that sophisticated. She’s definitely more experienced, though. When describing the clumsy oral sex technique of a recent boyfriend, Chiara sounds as jaded as Sasha Grey. Since she’s still a virgin (bummer!) and as innocent as any Brooklyn teen can be in the age of smartphones and internet porn, Lila is desperate to find a boy—any boy really—to call her own. The fact that she’s being raised by a well-meaning if ineffectual dad (Lila’s mom died of breast cancer not long ago) makes the prospect of receiving any useful parental guidance remote at best.


Sammy (Channing Tatum lookalike Ronen Rubinstein), the object (victim?) of Lila’s affections, is as cynical and promiscuous as she is romantic and pure. A college boy and wannabe gangsta, Sammy enjoys the attention lavished on him by Lila without quite knowing what to do with it, or her. (Lila’s virginity is definitely not a plus in his eyes.) The whole thing ends very badly, of course, but that’s pretty much what happens in most adolescent sexual explorations, isn’t it?

On paper, IT FELT LIKE LOVE doesn’t sound that terribly different from your typical YA novel or movie. Yet there’s nothing remotely conventional about Hittman’s film which is closer to the transgressive, sexually explicit work of French provocateur Catherine Breillat (FAT GIRL, ROMANCE) than to any Hollywood depiction of teenagers in recent memory. If Breillat seems to be Hittman’s guiding muse, there’s also a lot of Nancy Savoca (especially her 1989 masterpiece TRUE LOVE about a young Brooklyn married couple finding their bearings), Sofia Coppola (particularly Coppola’s dreamy 2000 debut THE VIRGIN SUICIDES) and Larry Clark (imagine a 20-year-later sequel to KIDS) here as well. Fortunately, Hittman has the directing chops to back up those auteurist heavy-hitter references.

I love how she depicts the humid torpor of adolescent summers where boredom is the principal emotion and getting into trouble—of various kinds—is just another way to pass the time. She also has as seemingly authentic (and uncensored) ear and eye for the way New York teens behave and talk as Harmony Korine displayed in his script for Clark’s KIDS.

The performances of Hittman’s young actors are as faultless as her writing and direction. Piersanti and Rubinstein in particular are exciting new discoveries, and Hittmann deserves to be fielding offers right and left in the YA-obsessed sphere of contemporary Hollywood.

One of the most refreshing aspects of the movie is Hittman’s unapologetic “female gaze.” The objectified male flesh—genitalia and all—of the beautiful young boy-men flitting about are as fetishized as comely young women traditionally are in most films. Breillat—and British feminist/film theorist Laura Mulvey who first coined the phrase “feminine gaze” in her groundbreaking 1975 essay, “Pleasure and Narrative Cinema”—would be proud. 3 1/2 out of 4 stars.
Posted by Milan Paurich at 12:00 AM