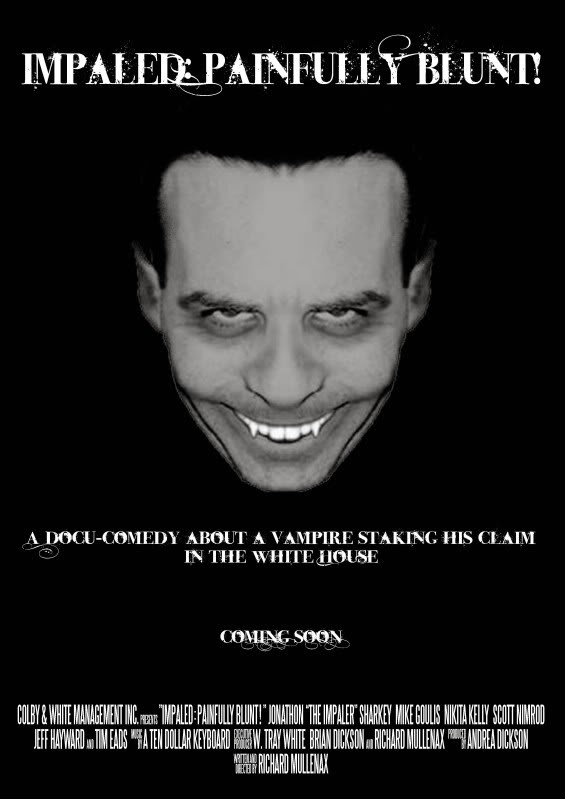 The year is 2008. Jonathon “The Impaler” Sharkey is a conservative Luciferian vampire politician with an evil eye on the White House. Richard Mullenax is a local filmmaker with a devilish scheme of his own: stage a documentary about Sharkey in which a variety of actors, shills and unwitting locals relentlessly prank the unknowing and bottomlessly precocious Presidential hopeful from behind a façade of legitimate film journalism.  Kind of a reverse BORAT… or tantric Punk’d.

Sharkey is no stranger to attention. An ex-professional wrestler and the subject of an earlier legit documentary, IMPALER (which followed his 2006 pursuit of Minnesota’s gubernatorial seat), the man carries a spike-laden wooden stake for impaling his enemies. He claims to be  a practicing vampire, champion boxer and face-shredding metal guitarist. Put him in front a camera and something will happen… whether you’re pranking him or not.

Mullenax, on the other hand, should not be in front of the camera, and the scripted interjections he throws into the film, during which he sets up some of the hijinks and smugly proclaims his will to mischief, are immediately alienating. They also underscore one of the film’s running flaws – it really doesn’t take this much effort to make Sharkey come off as something of a lunatic.

IMPALED’s most ill-advised segment is the use of an entire interview from a FOX affiliate in which mugging political satirist Greg Gutfield and comedian Jim Norton make repeated, lazy vampire jokes at a gleeful Impaler, who’s obviously more than happy just to be given the chance to tote out his stake live in studio. It’s a hefty chunk of unoriginal content that’s successful only in further driving home a question I had for the entire film, and which I almost wonder if Mullenax was afraid to ask.

(Granted, I haven’t seen W. Tray White’s earlier doc IMPALER, nor have I read much supporting material about Sharkey and his campaigns, but, seriously:)

How self-aware is Jon Sharkey?

If, on the one hand, his terrorist-staking, cloak-wearing, blood-chugging image is all a happy hand-me-down from his pro-wrestling days – a ghoulish caricature into whose skin a savvy, attention hungry Sharkey feels most at home – then IMPALED is simply a carnival within a carnival. And Mullenax and Sharkey are merely competing hucksters each brandishing their own unique, colorful deceptions for the sheer thrill of public attention.

If, on the other hand, Sharkey is a bit too comfy in his wacky Impaler skin – if he is, in fact, mentally ill, then Mullenax is just another pop culture opportunist, conning a man who should be encouraged to seek treatment - not political office. In this case, Mullenax is boldly exploiting Sharkey’s bad wiring for the simple, selfish satisfaction of dancing in the rain of sparks.

IMPALED: PAINFULLY BLUNT is at once funny and troubling.

Since I can’t answer the above question (although looking up Sharkey’s legal history definitely helped to inform my bias), I’ll share one of my favorite scenes: It’s when a hungry Sharkey, looking intensely concerned, questions a waitress about the size of the restaurant’s meatball sandwich. The only part of the movie that’s more offensive than some of Sharkey’s political opinions is the scene that follows: The jowly vamp deep-sixing the four-meatballs-long grinder. (2 out of 4 Stars)
Posted by Matt Finley at 1:54 AM