How To Train Your Dragon 2 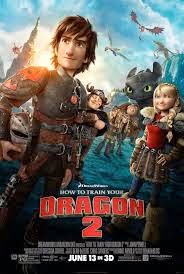 It's been five years since misfit Viking Hiccup (voiced by Jay Baruchel) found a way for his people to co-exist with the dragons they had been perpetually warring with in the first HOW TO TRAIN YOUR DRAGON. In doing so, he won the respect of his stubborn, traditionalist father Stoick (voiced by Gerard Butler). He also formed a lasting bond with the dragon Toothless. Now everyone in town has their own pet dragon, and things are looking good for humans and the scaly beasties alike. Of course that can't last or else we'd have nothing to make a sequel about.

While scouting out new territories, Hiccup and his pals from the first film (Astrid, v/b America Ferrera, Snotlout v/b Jonah Hill, Fishlegs v/b Christopher Mintz-Plasse, Tuffnut v/b T. J. Miller, and Ruffnut v/b Kristen Wiig), all like him now riding dragons, run into a group of dragon hunters led by Eret (Kit Harrington). They're collecting the creatures for the army of baddie Drago (Djimon Hounsou), but another dragon rider has been making things difficult for them. If you've seen the trailer you already know this mysterious rider is Hiccup's mother Valka (Cate Blanchett).

Battle lines are drawn and all-out dragon warfare seems inevitable, but Hiccup insists on trying to find a peaceful, non-violent solution. He's certain he can reason with Drago if he can just talk to the man one on one, despite all the evidence to the contrary. This emphasis in the DRAGON films on trying to find non-violent resolutions to conflict is refreshing, and writer/director Dan DeBlois handles the theme with a fair amount of complexity and subtlety. And even if Hiccup's pacifistic approach isn't always the answer, he's shown to be a better man for at least having tried.

Like its predecessor, HOW TO TRAIN YOUR DRAGON 2 is a solidly entertaining fantasy aimed at older kids and adolescents (some parts of the film could be a bit scary for younger kids). There's plenty of action, plenty of laughs, and the moral themes are well integrated into the story. While some of the freshness of the concept has waned, overall this is a satisfying sequel that seems more concerned with furthering its story than merely finding an excuse to expand its toy line. 3 out of 4 stars.
Posted by Bob Ignizio at 12:00 AM