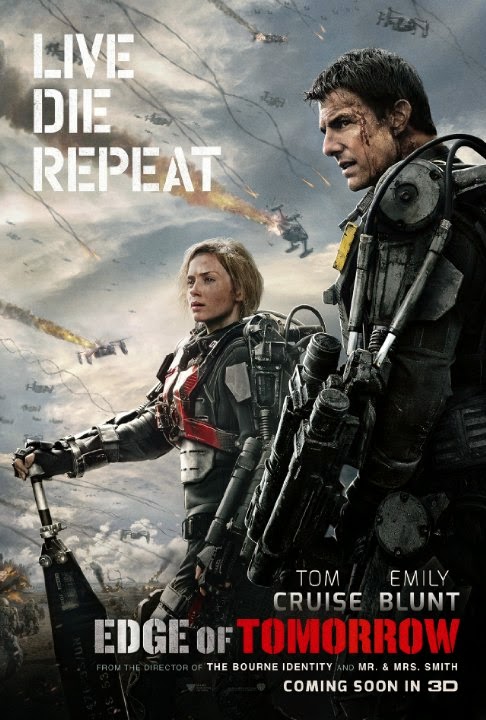 Tom Cruise finds himself reliving the same day over and over again until he gets it right in – no, not a remake of GROUNDHOG DAY, although no doubt one is coming, but rather the sci-fi actioner EDGE OF TOMORROW. Cruise plays Major William Cage, a middle aged ad man drafted into military service when alien invaders called Mimics begin attacking the earth, rapidly taking over much of Europe. Cage stays out of any real danger by using his skills to help sell the war to the public.

That changes when European forces General Brigham (Brendan Gleeson) orders him to film an upcoming “D-Day” sort of invasion to be led by war hero Rita Vrataski (Emily Blunt). Vrataski has given the earth hope by kicking major alien butt using a mechanized battle suit, now standard issue for all battle forces, along the way picking up the nickname “The Angel of Verdun” (although her fellow grunts prefer to call her, with affection, “Full Metal Bitch”).

Cage tries to dodge his duties and winds up labeled a deserter for his troubles. He gets assigned to a rag tab multi-ethnic unit (what other kind would they be?) known as J-Squad and, despite not even knowing how to use his guns, gets thrown into battle. Cage eventually figures out how to shoot, and even takes out one of the aliens. Unfortunately the creature's caustic blood drips on Cage's face, killing him.

And then he wakes up and gets to do it all again.

Turns out the alien Cage killed was a special one able to rewind time, and being covered in its blood gives Cage the same abilities. Just go with it. Anyway, Cage keeps going through the day and dying, learning a little more each time. Eventually he meets up with Vrataski and learns she had the same ability, but lost it. He also learns that unless the two of them can find the super alien controlling all the rest and kill it, nothing anyone does will prevent the earth forces assault from ending in massacre.

Cruise is perfectly cast as an unlikeable coward who slowly grows into a hero we can root for, in a way playing off a public persona still tainted by the Oprah incident and other irrelevant tabloid nonsense. Even though this is Cruise's film, Blunt is given a character that actually matters to the story and makes for an imposing presence as the battle hardened veteran who has to whip Cruise into shape. The romance angle between the two feels a bit forced and lacking in chemistry, but thankfully the film seems to know this and doesn't spend much time with it. And of course the men and woman of J-Squad are nothing more than standard issue war movie types, but that's what you need in a movie like this.

Adapted from a Japanese YA novel (they evidently call them “light novels” there), EDGE OF TOMORROW went through multiple screenwriters both before and after reaching the able hands of director Doug Liman (SWINGERS, THE BOURNE IDENTITY). Despite all the cooks in the kitchen, the film feels cohesive and flows smoothly, striking a nice balance between tense action and a surprising amount of humor. While one would hesitate to call EDGE “smart”, it at least treats its viewers like grown ups who are willing to suspend disbelief as long as they don't have to totally “shut off their brains”, and accept some familiar concepts provided the filmmakers freshen them up enough to keep things interesting. Not bad for summer popcorn fare. 3 out of 4 stars.