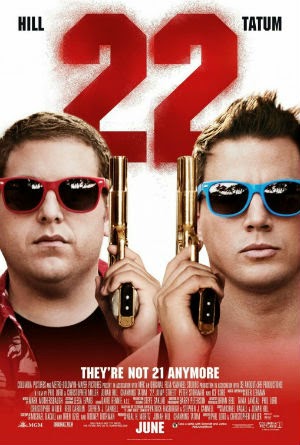 We didn’t catch 21 JUMP STREET in theatres in 2012.  Sure, we saw all the posters advertising the Jonah Hill / Channing Tatum police comedy, but didn’t think in a million years that a farcical movie adaptation of FOX’s hip late ‘80s crime series would fly.

After all, the TV show (1987-1991) was a dark, edgy drama starring an up-and-coming Johnny Depp.  Both Hill and Tatum had already racked up some hot-shot cinema creds (Hill for SUPERBAD and MONEYBALL, Tatum for STEP UP and G.I. JOE:  RISE OF COBRA), but what were the chances their buddy cop caper would hit with audiences?

Enter director duo Phil Lord and Christopher Miller (CLOUDY WITH A CHANCE OF MEATBALLS).  Tweaking the source material for maximum laughs, Lord and Miller succeeded by not only shrugging off the series’ gravitas, but by embracing absurdity on all fronts.  Their screenwriter, Michael Bacall (SCOTT PILGRIM), regarded everything as fodder—from sex and drugs and social castes to parent-child relations—and even gave the movie a smarmy self-awareness:  During a briefing with Deputy Chief Hardy (Nick Offerman), Hill and Tatum practically acknowledge they’re just a couple knucklehead actors starring in a throwaway frat-com reboot of a 90210-era cop show.

In other words, Lord, Miller and Bacall completely gutted the already deconsecrated church at 21 Jump Street for their hipster-savvy spoof, borrowing only FOX’s premise (young California cops trying to bust drug dealers while disguised as high school hooligans) for their parody.

21 JUMP STREET was raunchy and dumb.  And I laughed the whole way through.

The dynamic between dorky Hill and heartthrob Tatum clicked (the actors rather fittingly voiced Green Lantern and Superman in Phil / Lord’s THE LEGO MOVIE earlier this year).  Each was well-suited to his respective cop / student.  The peripheral characters intrigued, the outlandish situations were well-timed.  The potty humor spurted forth.

Not fixing what isn’t broken, Phil and Lord (and Bacall) more or less jump back on the same treadmill with 22 JUMP STREET.

The Metro Police Department’s low-key satellite office has relocated across the street from its former Aroma of Christ Church HQ to another church (whose address provides the sequel’s title).  The place is likewise refurbished with high-tech police gear and interns who habitually disrespect the once-holy environs (now it’s “Vietnamese Jesus” instead of “Korean Jesus”).  Next door, we spot a construction sign for 23 Jump Street Condominiums.

“I’m the first person in my family to ever pretend to go to college,” says Jenko.

Their task, however, is the same:  Infiltrate the student-body, then identify and take down whoever’s dealing the latest designer drug.  The recreational substance in question?  This time it’s WHY-PHY (compare with 21’s HFS “Holy F@cking Sh1t”), a lab-made concoction promising four hours of “work hard” mental acuity followed by four hours of “play hard” physical energy.  And yes, Schmidt and Jenko once again unwittingly consume said synthetic, their ensuing surveillance antics and “trip” good for ten minutes of hilarity.

22 is front-loaded with gags lampooning the novelty of campus life.  The “boys” inventory supplies in their dorm room for the camera (onscreen graphics included) and chum it up with neighbors, like the identical Yang twins—who think alike and speak in stereo—and creepy Mercedes (Jillian Bell).  Both sniff out possible WHY-PHY dealers in class (including one headed by a freethinking Professor Patton Oswalt) but drop / add courses when the trails run cold.  The only real leads are a deceased coed and a photograph of an alleged culprit with an unusual tattoo.

Last time around, a registration mix-up forced lumpy, awkward Schmidt to play the cool dude and athletic Jenko to transform into a chemistry-loving science geek—but now both are free to utilize their strengths.  Jenko falls in with a fraternity and bonds with alpha male quarterback Zook (Wyatt Russell) and Cro-Magnon party-boy Rooster.  Meanwhile, Schmidt schmoozes with the liberal arts crowd, drops jaws at a poetry slam, and cozies up with pretty coed Maya (Amber Stevens), who has more in common with him than he’d ever suspect.  Fellow students tease the guys for looking older than typical college freshmen (the droll Mercedes unleashes several zingers) but—unlike 21—the film is short on tense moments where we’re convinced they’re going to blow their cover, or that the crooks are onto them.

“We’re like Batman and Robin,” observes Zook.  “But with two Batmans.”

The slow, safety-first Schmidt can’t keep up with Jenko’s musclebound parkour superhero and retreats, freeing Jenko to live out his deferred dream as an All-American.  The script toys with the homosexual nature of the bro-mance once again, landing the two in a couples counseling session.  But when fresh clues come to light, both Schmidt and Jenko must dig deep, employing their diametrically dissimilar sleuthing skills to complement one another and crack the case over Spring Break in sunny Puerto de Mexico.

Peter Stormare’s played some memorable villains and henchmen before (FARGO, THE BIG LEWBOWSKI), but his “gringo” Mexican drug lord “Ghost” isn’t afforded room to flex here, beyond sparking an amusing BEVERLY HILLS COP-like truck chase early on.  On the other hand, Ice Cube—returning as the flummoxed, foul-mouthed Captain Dickson—nearly steals the show with his furrowed-browed tirades about budgets (more fourth-wall nods to the sequel’s production) and bullets.  Nick Offerman reprises his role as Chief Hardy, who again outlines the movie plot from his desk (“It’s the exact same thing!”) while briefing Schmidt and Jenko.  Early on, Schmidt and Jenko visit jailbirds Mr. Walters (Rob Riggle) and Eric Molson (Dave Franco), who they busted in the last movie.
A few lame-brained parents brought pre-teens to our screening, but more sensible moms and dads should take 22’s R rating to heart.  Laced with profanity and littered with dildos and dick references, the movie drops a genitalia joke and / or F-bomb every three minutes or so.  Drinking and drug use abound.  Visual gags have characters repeatedly shot, punched, kicked, and tasered in the privates (and there are several callbacks to Mr. Walters’ severed member).

Stick around for the end credits, which are accompanied by teasers for a possible third (and fourth, and fifth, and twelfth…) JUMP STREET installment (medical school, military school, seminary, etc.)—as well as faux commercials for video games and action figures.  Seth Rogen has a funny cameo, along with Richard Grieco (as veteran JUMP Detective Dennis Booker).  The soundtrack again leans heavy on hip-hop (Diplo, Duck Sauce, Wiz Khalifa) instead of the rock and roll standards once used to bolster such comedies, which makes us feel…well, as old as Schmidt and Jenko probably feel doing undercover work.

There are a few side-splitting moments, but they aren’t as clever or consistent as the original. 2 out of 4 stars
Posted by Peter M. Roche at 12:01 AM