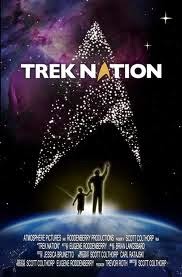 The other week I was at a graduation party for one of my younger in-laws and found out something sobering. None of the college-agers and teeny-boppers there knew the name "Gene Roddenberry" and what it meant.

I hope I don't have to recapitulate for all you twentysomethings (all of whom are likely to get handed entertainment-reporting jobs over me; no matter that they've never heard of D.W. Griffith, Humphrey Bogart, John Huston, David Lean or Jean-Luc Godard either) that Gene Roddenberry was a WW2 veteran and southern California police officer who made a career transition into writing/producing TV shows. He did cop dramas, militaria and westerns before capturing the zeitgeist by being one of the originators, in 1966, of the groundbreaking science-fiction hour Star Trek.

The rest was history, albeit of an up-and-down variety, as Star Trek got canceled, inspired a then-unprecedented upswell of fan reaction that brought the show back, got cancelled again, and then endured in syndication and cosplay-filled Holiday Inn fan conventions. Star Trek is now a world-renown culture-cum-industry of fans, video games, books, theme-park rides, and, lately, a relaunch as blockbuster JJ Abrams movies for Paramount (though I didn't see last year's entry STAR TREK: INTO DARKNESS, and I've had hints I really didn't miss much).
In Scott Colthorp's 2011 documentary TREK NATION, Gene Roddenberry's own son tells all. Or tells what he can. The declared gimmick of this uneven pop-history/Roddenberry family portrait is that young Eugene `Rod' Roddenberry, the son of Majel Barrett, the actress who played the USS Enterprise chief nurse, only 17 when his famed father died in the early 1990s, took little interest in dad's classic TV show as he grew up. Young Rod looks very much a long-haired SoCal surfer dude here in a plethora of home movies and proto-selfies, and he claims that as far as Star Trek was concerned, he really Didn't Get It.

While father and son were not exactly estranged, young Roddenberry did not seem intimately close to his dad either. Kid was more into STAR WARS, actually, though he did learn the ropes of TV and movie production later on Roddenberry-inspired TV projects. Here, in what turned out to be a Ten Year Mission begun with Colthorp in 2001, Rod Roddenberry goes on a sort of posthumous bonding exercise, trying to get to know his late parent (sadly, during the long production period Majel Barrett Roddenberry died as well) via surveying and getting to know Star Trek.

Sound a bit contrived, but we (well, those of us who know who Gene Roddenberry was) willingly go along, as Rod attends carnival-like Trek conventions, visits his father's Hollywood Walk of Fame star, interviews friends, family and co-creatives, and recounts the once-vital Gene Roddenberry's steep decline in health in his late 60s.

It's a quite frank portrait, flaws and all. We're told the elder Roddenberry was a compulsive womanizer (oh dear, I'd always wondered what the motivation was for PRETTY MAIDS ALL IN A ROW, a sexed-up serial-killer satire with Rock Hudson that was an untypical post-Trek movie project of his; some critics seems to speak quite highly of it), a bit of a grouch in the production process. And he perhaps fell too much for his own romanticized myth as a "visionary" of a hopeful future as codified in the voyages of Starfleet.

The film has no interviews with William Shatner (who also from time to time professed his own bewilderment at why a cancelled 1960s TV show got so phenomenally popular), but there are nice bits with classic-cast actress Nichelle Nichols and writer Dorothy `DC' Fontana, and goodly discussion about how much the show did or did not reflect the elder Roddenberry. It seems Wil Wheaton's juvenile role on Star Trek: The Next Generation, a character the producer zealously defended, served as both a surrogate son and projection into the Trek universe of Roddenberry's younger alter ego; Freudians, discuss among yourselves.

Colthorp and Rod Roddenberry have described searching for a suitable spine in the narrative, so (after the history-repeats-itself cancellation of the final TV spinoff Star Trek: Enterprise), a rather weak closure has Rod, after interviews with such Trek admirers as Stan Lee and George Lucas, sitting down for a discussion with wonder-kid JJ Abrams in advance of the blockbuster 2009 STAR TREK reboot movie. FYI, most of the other big-screen motion-picture versions, that I personally found more satisfying, are just disregarded.

That gambit tends to retcon TREK NATION a bit as belated promo for a Paramount/JJ Abrams ongoing cash-cow franchise. Even though, as Trekkies will tell you, Abram's initial script also offered up a young  Captain Kirk with painful parental issues - funny how that worked out. While telling the saga of Star Trek in terms of a father-son relationship is a strained premise at times, the documentary does treat the colorful, oft-costumed Trek fanciers and obsessives with more dignity than did the guilty-pleasure TREKKIES and its followups, which is something of a warpspeed achievement all in and of itself. (2 3/4 out of 4 stars)
Posted by Charles Cassady Jr. at 1:47 PM