The Anonymous People (May 30th and 31st at the Cleveland Cinematheque)

[THE ANONYMOUS PEOPLE screens Friday May 30th at 7:30 pm and Saturday May 31st at 9:15 pm at the Cleveland Cinematheque.] 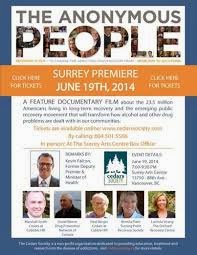 I can't say I'm overly fond of alcoholics. In school they always seemed more popular than I was. In northeast Ohio they tend to outnumber the sober people kind of the way George Romero zombies do the uninfected in a living-dead film. In the media the alcoholics always came across to me as being consummate insiders, commonly  getting the choicest jobs (I understand an unofficial motto of the Washington DC press corps was "drunk before noon"). Meanwhile I was kept at arm's length as a barely tolerated freelancer

In the entertainment industry, alcoholics pretty much run things, except for the coke fiends, the heroin junkies and the Scientologists. Alcoholics, in my increasingly bitter eyes, never seemed to lack for beautiful doormat girlfriends, career opportunities or enablers.

And, dwelling here, near to Akron, the founding place of Alcoholics Anonymous, all one hears all the time is the wonderfulness of Doctor Bob and Bill W. Maybe someday Summit County will build them a theme park. Probably called Cedar Pint. Aye, AA is the closest thing Ohio has to an official state religion. And living here, a lifelong straight-edge such as myself knows how an atheist must feel at Christmas.
So here I am, alone and sober (those qualities sorta go togther), and I get handed a documentary to review called THE ANONYMOUS PEOPLE, which proposes that alcoholics must unite to become a politically active force. Really? REALLY? Does director/emcee Greg Williams know how many Ohio politicians have drinking problems already? Way ahead of ya, dude.

In a provocative, borderline-angry tone (alcoholics getting angry? Nawwwww!), Williams defiantly introduces himself as one of America's 23.5 million addicts and alcoholics in `recovery.' Yet, he says, alcoholics and addicts and similar narcotized Twelve Steppers are missing the boat - and not just because they're in too much a stupor to locate the gangplank.

His assertion: despite success stories fostered by Alcoholics Anonymous and similar programs, despite orthodox medicine redefining addiction as a "disease," the film argues that recovering (and potentially recovering) addicts are still the subject of shame, screaming tabloid headlines and unduly harsh prison terms (and I just can't imagine the pressure of having all those girlfriends).

Much blame goes to the Reagan/Bush 1980s "Just Say No" war against drugs and drug-users. A nostalgic flurry of vintage clips portray the Nancy Reagan-led crusade, principally against crack cocaine, as a racially tinged hysteria that meant a boom in the prison and law-enforcement business (dig the snarling Clint Eastwood PSA). But it was a setback to sobriety. It shored up what Williams describes as another insidious foe, the sacred tradition of "anonymity" that silences many of those in recovery programs.

Instead, he says, addicts should campaign boldly and visibly for entitlements - for more funding for medical treatment, for example - just as AIDS sufferers did. And the film does indeed have, in vintage and modern clips, a number of bold, uncloseted recovering addicts such as First Lady Betty Ford, entertainer Dick Van Dyke, actress Kristen Johnston, Rhode Island state senator Tom Coderre and NBA athlete Chris Herron.

No mention of one of the first Hollywood superstars ever to go to the media with disclosure of his dire drug-abuse problems, Bela Lugosi. A true pioneer, though in fairness Bela didn't seem to be pushing for a change in public policy.

When the film champions separate-but-equal "recovery schools" for students offering a pure abstinence environment, I had to wonder if American society really needs yet another aggrieved-minority-pressure group lobbying away for their place pigging away at the trough of the the government dole and special treatment. Much as THE ANONYMOUS PEOPLE demands we look at addiction as a vital public-health issue that's been stigmatized and mishandled,  much as it made me think, I guess you can say that major tenets of THE ANONYMOUS PEOPLE rubbed me the wrong way.

It may or may not be related that a California professor emeritus (oh, what would we do without college professors?) was on the radio this week saying that being in killer street gangs was also a "disease," not the 'bangaz' fault, and should be treated as such. So being gangsta is an underfunded public health issue too, huh? Maybe that advocacy documentary is also in the pipeline. (99 and 44/100 per cent out of four stars; sorry, I just had to put that in there)