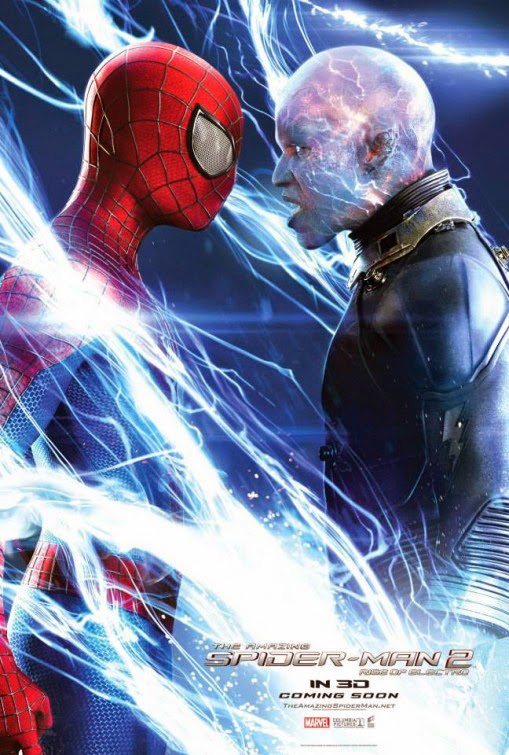 While it's less dreary and boasts more action than it's predecessor, THE AMAZING SPIDER-MAN 2 still falls far well short of “amazing”. The problem is apparent right from the beginning when, rather than get to the meat of its story, the film takes a detour to the past to show us what happened to the parents of Peter Parker. Given that the first film didn't manage to make us care much about that particular subplot, it doesn't exactly grab an audience to start a sequel that way.

Fortunately things pick up once we flash forward to the present where Spider-Man (Andrew Garfield, sharing the role with a whole lot of CGI) is trying to stop a plutonium hijacking by a Russian thug (Paul Giamatti having lots of fun hamming it up). Not only is this a fairly dangerous endeavor, Spidey needs to wrap it up in time to make it to his high school graduation ceremony where girlfriend Gwen Stacy (Emma Stone) is giving the valedictorian speech. Just like in the comics, though, old webhead handles it all with aplomb, wisecracking throughout the fight. It's a great sequence, and would have gotten the film off to a far better start.

In the course of his battle to stop Giamatti, Spidey rescues milquetoast Oscorp employee Max Dillon (Jamie Foxx). Because Spidey actually paid a little attention to him and said his name, Dillon develops a man-crush on the superhero. For Spider-Man, though, Dillon is quickly forgotten as he moves on to other matters, like sabotaging his relationship with Glenn due to guilt over his promise to her late father (Dennis Leary in flashbacks/ghostly apparitions) to keep her safe by staying away from her. Annoyed by Peter's wishy-washy emotions, Gwen dumps him and makes plans to get into Oxford.

Meanwhile, as fate would have it, Dillon has an accident at Oscorp involving electric eels that somehow turns him into a being of pure energy. This is understandably a bit disorienting for Dillon, now known as Electro, who wanders into Times Square to get a charge from some power lines. The police aren't too thrilled with this and decide to shoot first and ask questions later. It's at this point that Electro reveals the destructive potential of his new abilities. Fortunately Spider-Man shows up to save the day in another well staged action sequence.

Up to this point, the movie still has a chance. It's not especially good, but it is a serviceable popcorn action flick. Unfortunately the script by Alex Kurtzman, Roberto Orci, and Jeff Pinkner can't seem to stay focused. So not only do we waste more time on crap about Peter's parents, we also get the rushed introduction of Harry Osborn (Dane DeHaan) and the really rushed exit of Norman Osborn (Chris Cooper). The most disastrous result of this approach is that what should have been the climax of the film is only the first of at least three endings, each of which diminishes the impact of the last.

This is a movie that would seem to be crying out for a fan edit, but unfortunately the Harry Osborn subplot becomes too intertwined with the Electro storyline near the end that it doesn't seem easily fixable. All I can say is that, had the film stuck with Electro plus the Peter/Gwen romantic ups and downs, it would have been a passable bit of entertainment. As it stands, though, it's a cluttered mess that seems more concerned with planting seeds for future installments in the franchise than with simply telling a good story. 2 out of 4 stars.