The Adventures of the Penguin King (now on video) 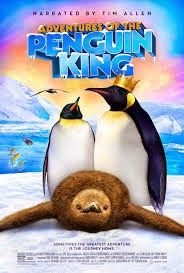 Holy hoping-lightning-strikes-twice, Batman! Or...Penguin! Remember, it was just about ten years ago, wasn't it, when the Cleveland International Film Festival dropped me as a promo-writer. Yes, to commemorate the milestone you are all ordered to wear black, until I recover from the rejection, heartbreak and humiliation (and I never recover from rejection, heartbreak and humiliation, not really). But also on the subject of wearing black, it was about the same exact time that a sleeper-hit nature movie called MARCH OF THE PENGUINS came out

MARCH OF THE PENGUINS, a National Geographic release, was actually a French documentary on the seasonal lifestyle of the emperor penguins of Antarctica, whose title translated more accurately as THE EMPERORS' MARCH. With new, poetic English-language narration by Morgan Freeman (I heard the original French narration was pretty bad, but then again, Hollywood would spread that kind of rumor), MARCH OF THE PENGUINS became a genuine must-see nature documentary, of a kind seldom patronized since BORN FREE. It even inspired (under comic Bob Saget) an adults-only, profane comedy redub of penguin footage entitled FARCE OF THE PENGUINS, and no higher tribute can be paid.

Well, maybe one. Here's a latecomer imitation of MARCH OF THE PENGUINS, with UK roots. ADVENTURES OF THE PENGUIN KING appears to have started out as a visually stirring scrutiny of king penguin colonies (because emperor penguins would have been, like, copying) on South Georgia Island, off Antarctica. It was originally voice-hosted by the revered naturalist Sir David Attenborough. But, for America's population of ADD/autistic kids, the nice old bloke has been redubbed - with comic actor Tim Allen.

The outcome actually recalls an older critter flick, the Japanese-made THE ADVENTURES OF MILO AND OTIS (about a farm puppy and a kitten) that came to our shores with an especially virtuoso one-man performance by Dudley Moore, as both storyteller and all the voiceover characters. Sorry, Buzz Lightyear fans, although Allen tries a lot, ADVENTURES OF THE PENGUIN KING didn't quite entertain me as much, though I suppose it can certainly hold the attention of kids.

Despite the title, director Anthony Geffen's waddling hero, `Rex,' is no flock leader but pretty much an everypenguin, wisecracking and monologuing through a male king penguin's-POV arc of finding a mate `Pat', minding an egg, and raising a chick. Complications arise when Pat is (distantly) killed and eaten by an orca, leaving Rex a king penguin single dad. Seals and ugly, marauding albatrosses also come into the picture as antagonists.

Much as it feels more like "The Penguin Clone," it's a fair diversion for small fry; the MPAA's dumb PG rating evidently derives from Allen's single use of "damn" (and he doesn't even utter it when Pat dies. I'm wondering about this Rex guy, you know. He doesn't seem to mourn very long. Who can tell he wasn't planning something against Pat from the outset. That's what I get for finally reading the soon-to-be-major-motion-picture Gone Girl).

THE ADVENTURES OF THE PENGUIN KING was shot using IMAX-level digital 3D motion cameras, including underwater rigs, and a few choice theatrical venues got to show it that way. The home-video combo packs give viewers an option of watching with 3D glasses, so that was one thing this has over MARCH OF THE PENGUINS (or, for that matter FARCE OF THE PENGUINS). A half-hour making-of featurette, narrated by David Attenborough, gives an impression of what this must have been like before Allen's voiceover-gag writers got hold of it.

Hey, Cleveland International Film Festival, get ahold of this one and redub it a third time so that the penguins are all talking about the wonderfulness of gay marriage. I'd write great blurbs for that. I need the money. (2 1/2 out of 4 stars)