Sometimes City (May 16th at the Cleveland Cinematheque)

[SOMETIMES CITY screens Friday May 16th at 9:00 pm at the Cleveland Cinematheque. Filmmaker Tom Jarmusch will be present to answer questions. 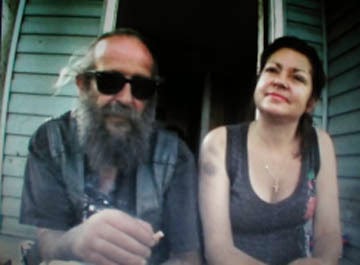 Aside from the late comic book writer Harvey Pekar, none of Tom Jarmusch (brother of Jim)'s interview subjects in the documentary SOMETIMES CITY could be considered celebrities. They're just ordinary Clevelanders expressing their often ambivalent feelings about the city in which they live. Chris Begay perhaps sums it up best when he says, “There's something about Cleveland that kind of taints everybody that's ever had a Cleveland experience.”

Shot in 2008/2009, SOMETIMES CITY could almost be seen as a companion piece to 2012's Detroit in decay and possible rebirth doc DETROPIA, but Jarmusch's film is more down to earth and rough around the edges. While there's no doubt footage was assembled in such a way as to convey a certain point of view, it still manages to feel natural and unstructured without being unfocused.

There is a decent effort at gathering a diverse cross section of Clevelanders for the interviews, but one could make the case that not all of Cleveland's ethnic communities are fairly represented, with Asians and Latinos notable for their scarcity in the film. One could also quibble with the fairly narrow selection of local music that Jarmusch opts to showcase, mostly punk/underground rock bands like The Mirrors, Short Rabbits, and Flat Can Co., the sole exception being funk/R & B band Texas Slim and the Blues Posse. It's not that the bands seen aren't worthy of exposure, but Cleveland's music scene is far more diverse than that. Still, it's Jarmusch's film, and I suppose one can't be too upset or surprised if the soundtrack reflects his personal tastes.

Those issues aside, SOMETIMES CITY feels like about as honest and real a movie about Cleveland as one could want. Regardless of whether you consider yourself an east sider or a west sider, if you're a Clevelander you'll find plenty here to relate to, and more than a few quotes are sure to ring true. 3 out of 4 stars.
Posted by Bob Ignizio at 12:06 AM