Repost: The Broken Circle Breakdown (May 4th at the Cleveland Cinematheque)

[THE BROKEN CIRCLE BREAKDOWN screens Sunday May 4th at 4:00 pm at the Cleveland Cinematheque.] 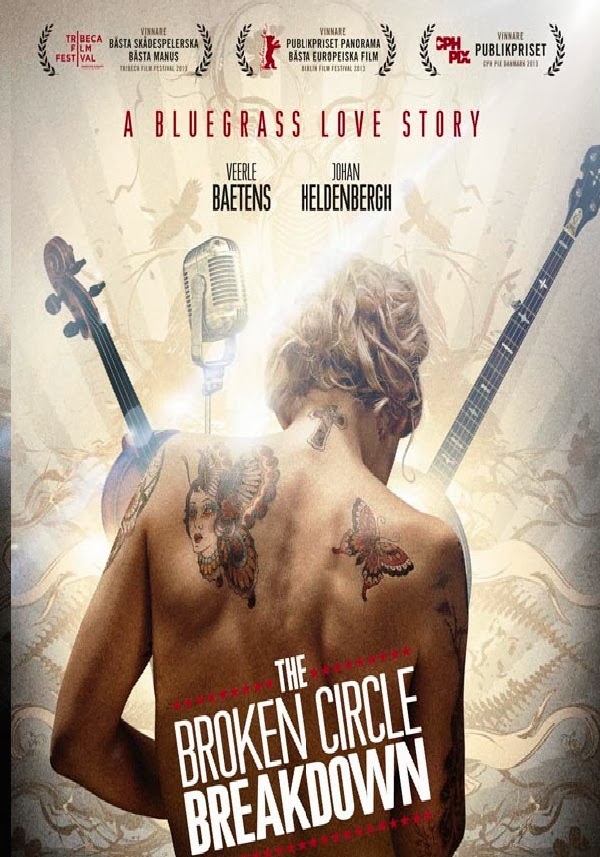 For a film that spends an inordinate amount of time wallowing in grief, there’s a surprising amount of pleasure to be gleaned from THE BROKEN CIRCLE BREAKDOWN. A 2013 Oscar nominee in the Best Foreign Language category, Belgian director Felix van Groeningen’s movie--true to its title--tells a story in circular fashion.

We meet life partners Elise (Veerle Baetens) and Didier (Johan Heldenbergh) right around the time they learn that their young daughter (Nell Cattrysse) has terminal cancer. Through a series of flashbacks and flashforwards, we see how tattoo artist Elise and musician Didier met, fell in love, endured the loss of a child and irrevocably drifted apart.

I’m not sure whether van Groeningen opted for a non-linear approach to narrative in an attempt to disguise the intrinsic banality of the script (co-written by van Groeningen and Carl Joos), or whether he’s simply enamored with the oeuvres of Alejandro Gonzales Inarritu and Nicolas Roeg. BROKEN CIRCLE's jigsaw puzzle structure doesn’t, however, deliver the metaphorical rewards of a really good Inarritu movie like AMORES PERROS, or provide the metaphysical resonance of classic Roeg (e.g., DON’T LOOK NOW, another study of a couple grieving the loss of a child). It just seems overly fussy and even a tad self-indulgent.

Yet THE BROKEN CIRCLE BREAKDOWN is one of those rare films that actually improves as it goes along. The craftiest thing van Groeningen did was to put as much emphasis as he does on music. Scenes of Didier and Elise (he plays the banjo and she sings) performing with their bluegrass band are exuberant, joyful and inordinately lovely. The frequent musical sequences provide more of an entry point into the co-protagonists’ hearts than the souped-up family melodrama surrounding them.

Shamelessly manipulative--the “Dead Child Movie” remains a particularly repellent tearjerker sub-genre--and rigorously unsentimental in equal measures, BROKEN CIRCLE owes much of its considerable power to the first-rate performances of Heldenbergh and, especially, Baetens. The dissolution of Didier and Elise’s union is depicted in suitably wrenching fashion (Didier’s meltdown during a concert is as emotionally devastating for the audience as it is for the character). At times, I was reminded of Alan Parker’s undeservedly forgotten 1982 masterpiece, SHOOT THE MOON, one of the best films ever made about divorce in this country.

I also admired van Groeningen for having the courage to take the subject of parental grief to its logical conclusion. If Hollywood ever decides to do a remake, you can be sure the soul-crushing original ending will be defanged to the point of complete and utter toothlessness. 3 out of 4 stars.
Posted by Bob Ignizio at 2:39 PM