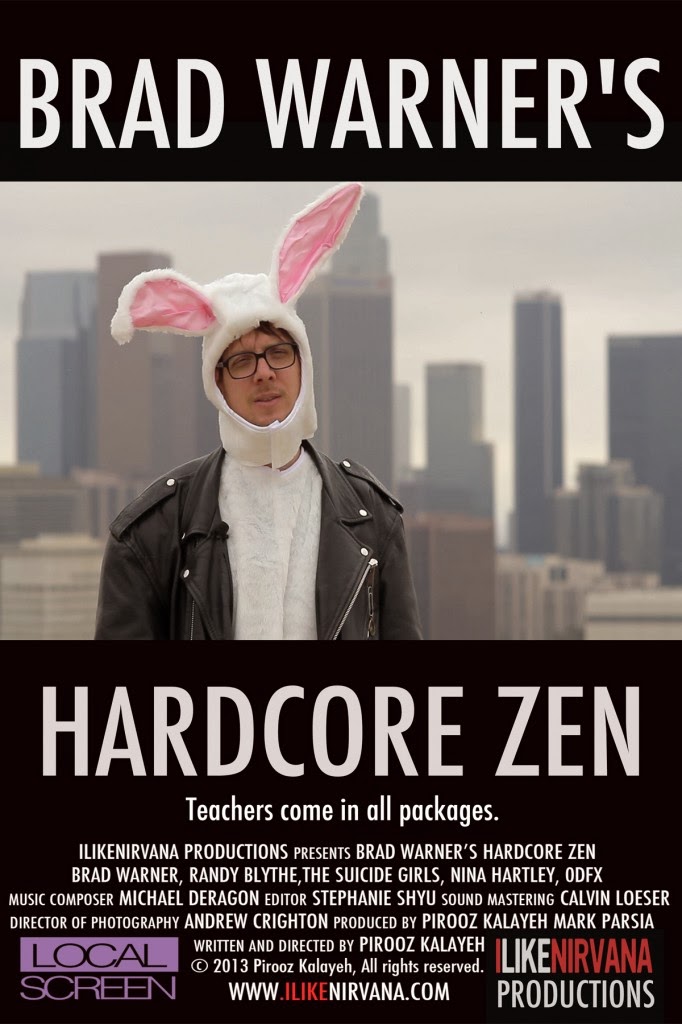 Caucasian with a boyish looking face and just as likely to be wearing jeans and a black leather jakcet as robes, it's fair to say that Brad Warner does not fit most people's preconceived notions of what a Zen teacher looks like. His career path has been unconventional as well, with stints in Akron area rock bands 0DFX (which he still does occasional shows with) and Dimentia 13, a number of years spent in Japan working on giant monster movies and TV shows (including some of the many Ultraman programs), and occasional forays into filmmaking, most notably as director of the documentary CLEVELAND'S SCREAMING about NE Ohio's hardcore punk scene of the 80s. But it is as one of the most prominent voices in modern Zen that Warner is known best, with several well regarded books on the subject to his credit, and a regular blog about Zen on the Suicide Girls website.

Of course you can't please everyone, and right out of the gate the documentary BRAD WARNER'S HARDCORE ZEN shows some of the varying reactions people have to Brad's approach to Zen. While some like his laid back manner, to others he comes across as flippant. For his part, Warner seems to enjoy a little confrontation and disagreement.

After this brief introduction, the movie goes on to recount Brad's introduction to Zen through KSU professor Tim McCarthy, his time spent studying under Japanese Zen teacher Gudo Wafu Nishijima, his various creative endeavors, and of course his own writing and teaching of Zen. Brad explains how the search for something “authentic” led him to punk rock, which he admired for the way it questioned authority, and ultimately to Zen, which in Brad's mind went punk one better by questioning itself. Additionaly, Brad talks about some of the similarities he sees between Zen and Alcoholics Anonymous, whose founder Dr. Bob was, like Brad, from Akron, Ohio.

The largest section of the film focuses on Brad's fairly liberal views on sex and sexuality which don't always sit too well with more ascetic followers of Zen. This really came to the fore with Warner's 2010 book Sex, Sin, and Zen: A Buddhist Exploration of Sex from Celibacy to Polyamory and Everything in Between, which among other provocations includes an interview with Nina Hartley.

While Zen doesn't say one has to be celibate, it does say one shouldn't misuse sex. To some, What Ms. Hartley does would qualify as misuse, and they take exception to that and other aspects of Warner's writing. And considering that Brad writes a blog with a comments section on it, it's no surprise that some of his detractors have taken to the internet to voice their disapproval and dislike with the usual amount of intelligence and nuance one finds in online comments sections.

One does wish the film had presented Brad's past in a more straightforward, linear manner. It hops around a good bit, and it isn't always clear where certain events fit on the time-line. It also would have been nice to include a little bit more information about the core tenets of Zen and its history for those who aren't familiar with it. Finally, as much as Brad's views on sex are important and interesting, it does feel as though the film puts a little too much focus on that aspect. Still, both Brad's life and the ideas of his that the movie explores are interesting enough to hold one's attention regardless of any prior knowledge of Zen, and despite dealing with a lot of philosophical issues, the film never feels too heavy or preachy. 3 out of 4 stars.

More info on the film's website.
Posted by Bob Ignizio at 1:59 AM