Pig Death Machine (May 23rd and 24th at the Cleveland Cinematheque) 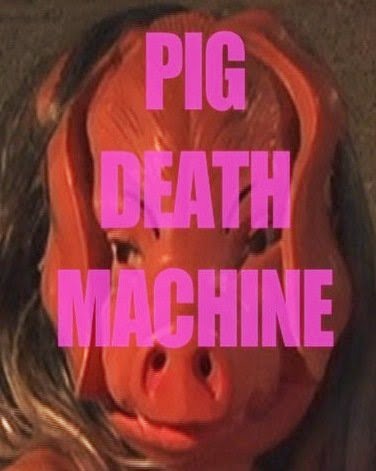 Mixing influences from the east coast “Cinema of Transgression” movement spearheaded by Nick Zedd and the comedic shock value epics of John Waters with a candy-colored plastic eroticism reminiscent of Gregory Dark's misanthropic pornos, John Moritsugu's PIG DEATH MACHINE proudly and boldly proclaims that the spirit of underground film is alive and well in the twenty-first century. Of course it's a lot harder to shock with mere sex and violence these days, so aside from a delightfully unerotic sex scene involving two girls, one wearing a pig mask, PDM doesn't really try. Which is not to say for a minute that this film is anything less than profoundly weird and disturbing.

The plot centers on two protagonists, both of whom want their lives to be very different. One is a girl with a shockingly low IQ, played by Moritsugu's wife (and co-writer of the film) Amy Davis. She knows how woefully ill equipped she is intellectually and wants to be smarter. The other is a botanist (Hannah Levbarg) who finds humans annoying and longs for the more serene company of plants. When these two inadvertently consume some tainted pork with magical properties, they get their wishes only to find they aren't necessarily any better off.

The above paragraph probably makes the film sound more straight forward than it really is. Either that, or I was kind of dumb for not getting it the first time through. After Moritsugu explained it to me when I interviewed him, it certainly felt like I had missed the obvious. Despite the weirdness and the occasional digressions from the main storyline, it's all right there. But even if you don't get it, the movie is so visually striking and flows so well that it carries you along regardless, right up to the final stop motion meat animation climax.

No movie, at least none worth a damn, is “for everyone”, and that goes double for any movie with a title like PIG DEATH MACHINE. While it's not on the level of a PINK FLAMINGOS (what is?), it's certainly a compelling and entertaining watch for those who can appreciate out there entertainment. 3 out of 4 stars.
Posted by Bob Ignizio at 12:23 AM