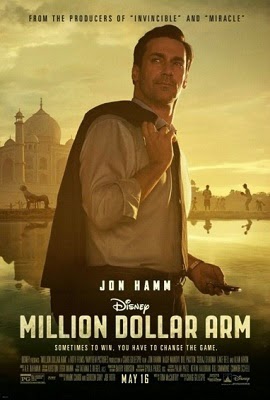 My 9-year old son is no stranger to my movie-going ways.  He’s tagged along on several cinema outings over the last couple years.  But he couldn’t join me last Monday.  Not on a school night.

“What are you seeing?” he queried last Monday.

Loosely based on true events, Disney’s MILLION DOLLAR ARM is the story of down-on-his-luck sports agent who tries turning things around by recruiting Indian teenagers for major league baseball tryouts back home in America.

Lantern-jawed, rumble-throated Jon Hamm (MAD MEN, PROVIDENCE) plays J.B. Bernstein, a hotshot L.A. sports rep on a three-year losing streak with his Seven Figures Management agency.  A single man with few meaningful commitments, J.B. conducts business with his head in the clouds and dollar signs in his pupils.  His partner, Ash (Aasif Mandvi), is a family man with a better sense of their assets (dwindling), debts (accruing), and deadlines (all too soon).  Ash points out early on that they haven’t represented any lucrative clients since Barry Bonds and Emmett Smith; they’ll have to close shop and crawl back to their previous employers with their tails between their legs if business doesn’t pick up.

J.B. gets desperate when a mega-deal with a superstar footballer named Popo (the Cincinnati Bengals’ Rey Maualuga) crumbles.  After drowning his sorrows one night, he slumps on his couch at home and has an epiphany while watching a televised cricket match.  Ash loves the sport, but J.B. doesn’t understand the nuances of the game.  Bored, the agent clicks over to Britain’s Got Talent—where Scottish homebody Susan Boyle is wowing Simon Cowell's T.V. audience—and has a flash of inspiration. Within days, he’s trying to sell a wealthy investor on using reality T.V. as a platform for scouting for potential MLB talent—amongst Indian cricket players.

Smelling money, Chang takes the bait and dispatches J.B. and his team to India, where host Vivek (Darshan Jariwala) braces J.B. for culture shock.  Things move slower there, and none of the T-shirts, flyers, and equipment are ready for Million Dollar Arm’s big premiere.  But the turnout is great—thousands of young Indian males show up to tryouts in Mumbai, Delhi, and Hyderabad in hopes of crash prizes and a coveted trip to the States.  But none of the early entries can hurl a baseball accurately in excess of 55mph or so.

J.B. puts Dinesh and Rinku up in a swanky hotel, but they’re curious fish-out-water who don’t speak a lick of English, and not even traveling translator / mentor Amit (Pitobash) can help.  When the athletes’ bad behavior gets them booted, J.B. takes all three visitors on at his bachelor pad, where concepts of prayer, breakfast, and television contrast sharply with their less luxurious Indian domiciles.  Rinku falls in love with delivery pizza and MTV.  Dinesh and Amit insist upon their morning meditation and prayer.  All three guests play matchmaker between J.B. and his hot hospital intern neighbor, Brenda (Lake Bell).  None of the guests understands why their host keeps ducking out at all hours; they figure J.B. is just another rich American with important things to do.

In actuality, J.B.’s firm is bleeding money the project.  Ash is forced to downsize their office space and work out of boxes.  J.B. gets a second shot at Popo, but Dinesh and Amit unwittingly capsize the opportunity with more antics.  House (who coached Nolan Ryan and Randy Johnson) says it’s “highly improbable” that either Indian will be up to snuff for tryouts in Tempe, Arizona; Rinku in particular has trouble correcting a slow-motion windup that earns him the nickname “Flamingo.”  When J.B. asks Chang for additional time to prepare, he’s grilled with talk of honor and broken promises.  Everybody’s reputation hangs in the balance, and the pressure mounts for our protagonist pitchers; billions of countrymen are watching back home.

The final act is rife with false-endings and feel-good comebacks borrowed from old-school sports flicks like THE BAD NEWS BEARS, MIGHTY DUCKS, and ROCKY II (and III).  Heck, we just recently saw this sort of think-outside-the-box phenomenon with MONEYBALL, wherein Brad Pitt’s math-savvy manager reenlisted players who’d been injured or otherwise discarded.  However, given that MILLION DOLLAR ARM is a Disney production, director Craig Gillespie (MR. WOODCOCK, FRIGHT NIGHT) increasingly focuses more on people skills than actual baseball skills.  Far more minutes are devoted to the burgeoning friendship between the Indians and Brenda—and the precarious romance between Brenda and unrepentant “jerk” J.B.—than to the boys’ exercise regimen or House’s coaching technique.  And that’s good.  Because if the film didn’t gradually chip away J.B.’s callous exterior, we too would consider him a grade-A a$$hole unworthy of success.

“They’re just kids!” scolds Brenda after a late-night trip to the emergency room.  “To you they’re just an investment.”

J.B. finally comes around, connecting so profoundly with Brenda and the Indians that—when tested—he makes the ultimate (if expected) sacrifice of putting his personal relationships above the project’s potentially lucrative future.

Hamm brings the proper balance of seriousness and vulnerability to Berstein’s agent.  Arkin contributes the same snarky retiree repartee he brought to THE INCREDIBLE BURT WONDERSTONE and GRUDGE MATCH—but it works.  Bell’s sexy student doctor is our emotional barometer (she and Ash are the only insiders who already think like us) and acts as J.B.’s moral compass, grounding him in the humanity behind his endeavor.
But audiences’ hearts will go out to Mattal’s and Sharma’s unlikely champions.  The two SLUMDOG MILLIONAIRE and LIFE OF PI stars complement one another well, and it’s their characters’ multicultural against-the-odds quest that’ll resonate with younger viewers:  It’s refreshing to root for underdogs who don’t necessarily look like us, share our religious beliefs, appreciate our cuisine, or even share our language.  2 out of 4 stars
Posted by Peter M. Roche at 12:37 AM