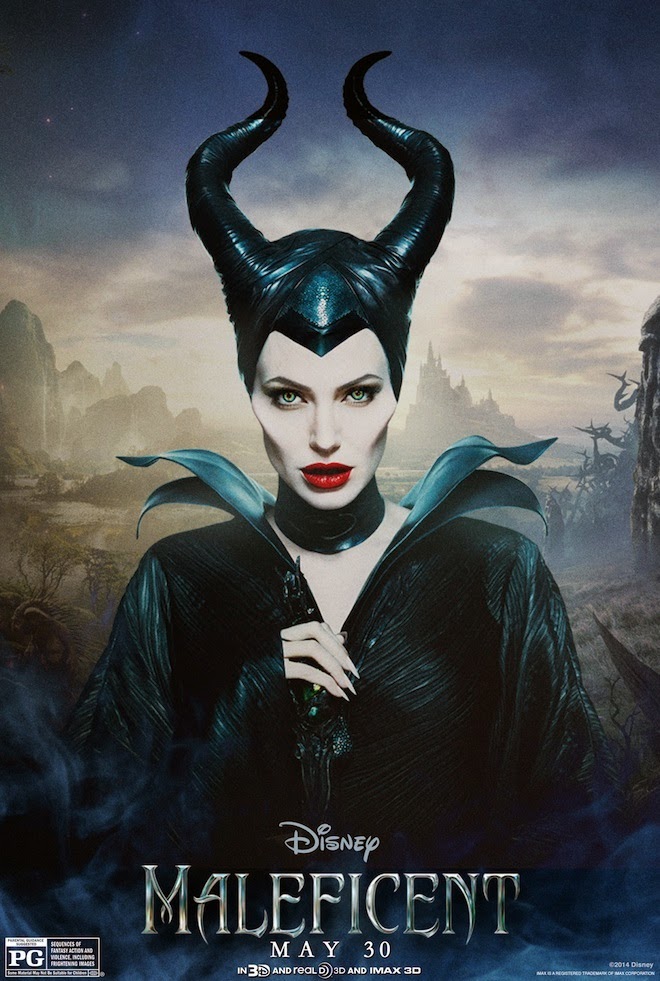 Hard to believe it today, but Disney considered 1959’s SLEEPING BEAUTY a commercial disappointment after the triumphs of FANTASIA, DUMBO, and BAMBI.  The House of Mouse put all potential “princess” features in hibernation—like their own poisoned apple-munching maidens—for three decades.  But the film has endured, delighting (and terrifying) new generations of tikes over the years.

Like SNOW WHITE AND THE SEVEN DWARVES and CINDERELLA before it, SLEEPING BEAUTY became a definitive “princess” picture.  Princess Aurora is innocence idealized in pen and ink.  And if vengeful Maleficent isn’t the Mother of All Movie Villainesses, she’s damn near close, perhaps sharing the mantel only with The Wicked Witch of the West.

Fifty-five years on, the story was ripe for retelling.  And who better to re-dream the dream than Disney?  An expository voiceover by a certain female protagonist informs us MALEFICENT is less a live-action prequel to the animated classic than a complete SLEEPING BEAUTY overhaul where reason, emotion, and morality aren’t so cut-and-dry.  Most of the characters here don’t believe in true love anymore, so it’s gonna take more than the standard sword-to-serpent’s heart to win their Happily Ever After.

Speaking of hearts, turns out titular dragon-lady Maleficent began life with a warm, gentle one—even if it turns to stone later.  Her sidekick, Diablo, now goes by Diaval (Sam Riley), and has the ability to transform into other animals, too. SLEEPING BEAUTY’s three pastel-colored pixies still factor in, albeit with new names.  Princess Aurora is the same old precocious blonde you remember, but her dad’s a royal A-hole.

When first we meet the “new” Maleficent, she’s a pure-of-heart fairy with Vulcan ears, horns, and prodigious wings.  She’s lonely—an orphan—but that doesn’t stop her from making merry with gnomes and forest creatures every morning.  When a handsome human boy happens upon the Moors, Maleficent is taken by his kindness.  The teenagers fall in love, their bond promising unity between the fairy and human kingdoms.

Sadly, the magic doesn’t last.  Not the good magic, anyway.

The boy—Stefan (Sharlto Copley from DISTRICT 9 and ELYSIUM)—becomes a greedy, ambitious adult (just like most humans).  Aspiring to the throne, he ignores Maleficent (Angelina Jolie) to serve aging King Henry (Kenneth Cranham), whose first and only attempt to conquer Faerieland is thwarted by Maleficent and her army of tree-beasts.  Humiliated, deathbed Henry vows to name as his successor the man who would avenge him by killing Maleficent.  So cunning Stefan rekindles his romance with the fairy queen, only to betray her trust in the worst possible way—just short of murdering her.  We can’t report how Stefan convinces Henry he’s offed Maleficent without conceding major plot points.  Suffice to say he does, and gets the crown.

Brokenhearted, Maleficent (Latin: mal=evil, facio=make or do) crashes the christening of Stefan’s infant daughter, Aurora, and curses her:  The girl, though beautiful and beloved, will prick her finger on the spindle of a spinning wheel and fall into a coma-like slumber by sunset on her sixteenth birthday.  The curse is irrevocable, but Maleficent—perhaps to show she’s not being completely unreasonable—says the only remedy for the deep sleep shall be True Love’s Kiss.

Sound familiar?  So far, so good, yeah.  But this ain’t grandma’s SLEEPING BEAUTY.

Maleficent cordons off the Moors from King Stefan’s land with a massive, impenetrable thorns and gets down to the business of pouting incessantly (she hasn’t a proper job).  The foliage darkens with her mood, and the carefree creatures keep their distance, wary of her sorrow and rage.  Unbeknownst to Maleficent, however, Stefan orders all spinning wheels confiscated and locked away and—to guarantee Aurora’s safety—sends his daughter off to live in anonymity until the day after her sweet sixteenth.  A trio of pixies (Knotgrass, Thistlewit, and Flittle) spirit baby Aurora to a secluded cottage in the woods where, disguised as peasant women, they determine to raise the girl themselves (they don’t work for a living, either, so they’re available to babysit).

Never mind why anybody would leave a perfectly quaint cabin vacant in the middle of an idyllic forest; the proprietor’s probably aligned with the Fellowship of the Rings and is off gallivanting with Gandolf.

The accident-prone pixies haven’t any maternal instinct.  It’s not until Maleficent—who hasn’t anything better to do but brood and spy on others (again, too much leisure in these parts)—arrives on the scene and surreptitiously nurtures Aurora that the baby gets the TLC she needs…to mature into the sprightly teen Maleficent herself doomed.

“I know you,” says Aurora (Elle Fanning), goading her guardian out from hiding.  “You’re my fairy godmother!”

Maleficent and pseudo-orphan Aurora become a surrogate family, bonding so effectively that the elder even tries undoing her curse (sorry, no take-backs!).  To make matters worse, Stefan—who’s been fuming for the last sixteen years—stiffens his resolve to take revenge on Maleficent for the christening debacle as the designated day draws nigh.  Heck, the king’s so angry that he brushes Aurora off when she returns to the castle on her own (oops, a day early).  His bone-headedness only ensures her curse comes to pass.

The climactic face-off between Stefan and Maleficent echoes the SLEEPING BEAUTY finale—we meet Prince Phillip (Brenton Thwaites) and duel with a dragon by the time all’s said and done.  But don’t go thinking Maleficent’s aversion to iron will stop her from putting up a fight.

Directed by first-timer Robert Stromberg, MALEFICENT is a passable fantasy charged with competent acting (particularly by Jolie and Copley) and the same otherworldly special effects Stromberg brought to AVATAR and OZ THE GREAT AND POWERFUL.  The source material—a classic Brothers Grimm tale whose 17th Century heroes and villains (and heroines and villainesses) were more conventionally clear-cut (and even more so in the post-WWII Disney adaptation)—receives a timely makeover for an age when it’s often difficult to discern “good” from “bad,” and for a guilt-ridden, self-help culture audience who are perhaps more willing to recognize their own moral faults and ambiguities.  Younger viewers will appreciate the inner conflict, the notion that while anger and hate are understandable (if not primal) reactions when someone trespasses against us, we still hold the power to do the right thing and shape our own destinies.  Grudges are toxic, and we needn’t let others’ offenses spoil our good virtue.

Jolie’s already high cheekbones and full lips are enhanced, courtesy simian cinema makeup guru Rick Baker (KING KONG, RISE OF THE PLANET OF THE APES).  With her piercing emerald eyes, angular profile, and penchant for stoic one-liners, Maleficent is a potent mix of babe and bitch.  The wardrobe department helps; Jolie sports earth tones and lets her hair down (and ears stick out) as a benevolent fairy, but wears all black and secures her do in a horn-swaddling headpiece when channeling SLEEPING BEAUTY’s iconic “Mistress of Evil.”

Meow.  Not since Charlize Theron played Queen Ravenna (in SNOW WHITE AND THE HUNTSMAN) has evil looked so good.
2 out of 4 stars