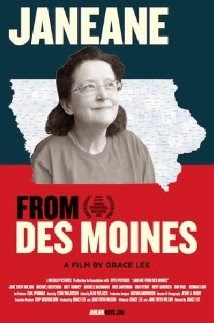 There are a lot of things I meant to do but never got around to it. Like having a gainful career and healthy relationships. But one of the more attainable of my missed goals was an aspiration to see filmmaker Grace Lee's AMERICAN ZOMBIE. A direct-to-DVD curio about which I've heard some very good things, it seems to be a sardonic mockumentary takeoff on zombie lifestyles, as seen from the POV of a TV camera crew who present the walking dead as an unfairly maligned minority group outside of the US mainstream.

But no, I haven't yet seen AMERICAN ZOMBIE. Maybe someday. But I have watched Lee's latest, JANEANE FROM DES MOINES, which could be considered sort of a followup to AMERICAN ZOMBIE. It also plays tricks with film fact and fiction, and it confronts another type of supernatural creature that was once human, now a flesh-eating predator: conservative Republican politicians.

Oh, now that's just mean, a cheap shot. Meaner and more unfair than anything in the movie itself, I think. I dunno. Maybe you make the call.

Not at all played for laughs, JANEANE FROM DES MOINES was a collaboration between Lee and actress/co-writer Jane Edith Wilson. Her `Janeane Wilson' is introduced as a non-caricatured Christian-activist Republican wife in Iowa, disliking where the Democrat White House is taking the nation, and followed by documentary cameras as she gets involved in public affairs in the important election state.

Prior to 2012 presidential elections, `Janeane,' in character as a middle-aged Des Moines health-care worker, attends (real-life) Tea Party gatherings, faith-based financial seminars, and rallies and speeches. The camera catches her at Iowa visits by such supporting-player folks as Rick Perry, Herman Cain, Mitt Romney, Michele Bachmann and Newt Gingrich, none of whom, in and of themselves, come across as crazy as the monolithic Hollywood/NYC media liberals wants us to think of them (but obviously Lee is no fan).

Janeane searches vainly for conservative candidates in whom she can believe, ones who aren't wealthy "elites" with nothing in common with low-wage ordinary folk. Meanwhile, job layoffs, loss of her medical coverage, and her husband's (gay) infidelity erode away the heroine's "covenant" marriage and cost her the household.

It was indeed a BORAT-style media hoax, when `Janeane' was caught by national news-media cameras at a Republican rally, tearfully asking the candidates for help in saving the American middle class, which she so perfectly represented - to the extent that secretly being an actress in a mockumentary could represent the middle-American middle class. The mix of actual news footage, rendered unflattering to the GOP, in such a context, and invented drama may understandably have some viewers crying foul. But the point about Washington leaders detached and distant from downtrodden, desperate Americans in flyover-territory is a sharp one.

Janeane is a more sympathetic figure than most filmmakers would conjure of a churchgoing Republican Tea Partier. Still, a nasty, mean, struggling, low-paid cheap-shot prone writer such as myself, from the dying middle-class, may propose that if Grace Lee really wanted to be daring, she'd do a similar mockumentary showing a fervent Democrat growing disillusioned and suffering under the fading "hope" and "change" of the current Democratic administration (and whatever happened to that annoying "Obama Girl" anyway?).

But that sort of approach isn't likely to gain one a bright future in Left Coast showbiz (or scooping up arts grants), is that not correct? Then again, what do I know? Working my three minimum-wage jobs just to barely get by, I wasn't even able to find time to cast my futile vote in the mid-terms the other Tuesday. (2 1/2 out of 4 stars)