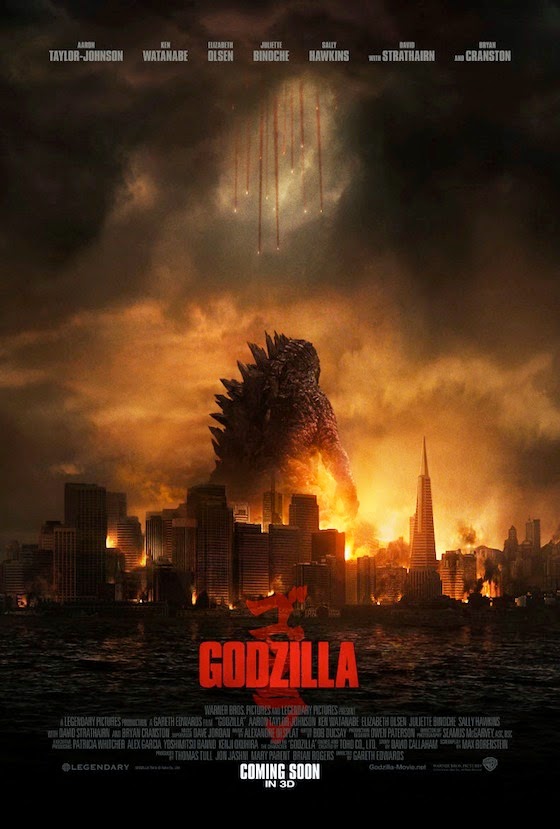 For the first two thirds of its running time GODZILLA seems almost like an exercise at dashing audience expectations. The story begins in 1999 when a disaster destroys the Japanese nuclear plant where Joe Brody (Bryan Cranston) and his wife Sandra (Juliette Binoche) are working. Sandra doesn't make it out alive, leaving Joe to take care of their young son Ford. Unfortunately for the boy, his father is more interested in pursuing what seem like wild conspiracy theories about what really happened than raising his son.

In the present, Ford (Aaron Taylor-Johnson) defuses bombs for the army. He's just returned home from his latest deployment to reunite with his wife Elle (Elizabeth Olson) and son Sam (Carson Bolde) when he learns that dad has been detained for trying to sneak into the ruins of the nuclear plant where everything went south all those years ago. So he hops a plane to go take custody of his old man, still certain that the guy is crazy. As fate would have it, though, events soon take place to vindicate Joe's crackpot ideas of a cover up.

No, Godzilla doesn't rise up out of the ocean and start smashing stuff. Seems there's some kind of giant radiation eating insect called M.U.T.O. (Massive Unidentified Terrestrial Organism) that has been hibernating in the ruins of the power plant. A secret government organization led by Dr. Serizawa (Ken Watanabe) and his research partner Vivienne (Sally Hawkins) has been monitoring the creature, but now that it's on the move the military, headed up by Admiral Stenz (David Strathairn) takes control.

Taylor-Johnson is ostensibly the film's lead, but his character is utterly nondescript. As for Olsen, who has done a lot of good work since she first started getting noticed with 2011's MARTHA MARCY MAY MARLENE, well, I guess it's just a rite of passage that every Hollywood actress has to play the inconsequential “love interest of the hero” part at least once in a while. Her character could have been left out entirely and it would have made little difference to the film, and the same is true for Hawkins thankless role. And what a shame to see Strathairn utterly wasted in a minor role where his only purpose is to deliver the occasional wrong-headed order to his subordinates. Watanabe at least gets some fun bits where he talks like a fifties B-movie scientist, notably detailing the implausible origin of the monsters. Only Cranston manages to come across with any real screen presence, but despite what the trailers might lead you to believe, he's only in the film for a little while.

Despite the fact that the only interesting character has exited the film by the end of the first act, GODZILLA insists in putting the focus on its human players. At times it almost plays like a slicker, dumber remake of director Gareth Edwards' indie hit MONSTERS. That film could get away with only giving us glimpses of the creatures because it had interesting ideas, compelling characters, and a focused narrative that knew what it wanted to be. That, and it wasn't a Godzilla movie with all the baggage and expectations that entails.

When Godzilla finally does show up in his own movie, it's for barely a few seconds the first time. After that, we mainly see his spiky back fins, maybe a foot now and then. At one point, action threatens to break out as Godzilla closes quarters with one of the MUTOs, but the movie literally slams a door in our face just as they collide. It's one thing to have a slow build in a monster movie, but this is more like a cruel tease. When Dr. Serizawa asserts at one point in the film, “let them fight,” you just want to scream, “yes, please!”

Then just when you're about to give up on it, GODZILLA almost redeems itself in the final act. THIS is the big budget American Godzilla movie fans have been hoping for. It is in these sequences that we finally understand that this version of the Big G is more or less in the super hero mold of his later seventies films, albeit in a toned down, less silly way. In interviews Edwards has stated that his Godzilla is supposed to represent the wrath of nature and be more of an anti-hero, but it really doesn't come across that way here. He shows little interest in destroying cities; his only purpose is to go after the big bugs and “restore balance”, and at no time does he come across as scary or a threat to the human characters. And that's okay, it's just not the film the director seems to think he's made.

Anyway, the big battle between Godzilla and the MUTOs is a lot of fun and has a couple of moments that got big cheers from the crowd. Too bad it was such a long, tedious, and overly serious slog to get there. Sure, it's better than the 1998 Dean Devlin/Roland Emerich GODZILLA, but that film set the bar so low it was pretty much a given this would be better.

Even though it only clocks in at two hours, fairly conservative by summer blockbuster standards these days, GODZILLA feels a lot longer. Too many characters, too many digressions that don't matter, and not enough monsters. Cut 30 minutes out of it and maybe add in another 5 or 10 minutes of monster action, and you'd have a winner. Unfortunately that's not the movie that was released. Still worth a watch for monster fans, but not the big budget American Godzilla fan many of us have been hoping for. 2 ½ out of 4 stars.
Posted by Bob Ignizio at 12:29 AM