[GOD'S POCKET opens in Cleveland on Friday May 16th exclusively at the Cedar Lee Theatre.] 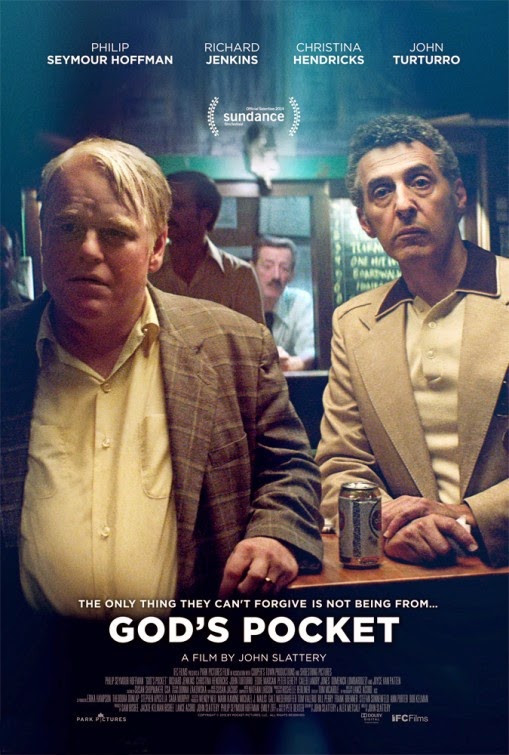 Mad Men star John Slattery (he plays Roger Sterling) tries his hand at directing with GOD'S POCKET, an adaptation of a novel by Pete Dexter. To this end, he has assembled an impressive cast including Phillip Seymour Hoffman, John Turturro, Christina Hendricks, Caleb Landry Jones, Richard Jenkins, and Eddie Marsan. While the source material seems rife with potential and the cast give it their all, the film as a whole just never really gels into anything of note.

The plot concerns the death of Leon Scarpato (Landry Jones), son of Mickey (Hoffman), a small time crook in the meat business. Mickey's wife Jeannie (Hendricks) thinks there's something fishy about the circumstances in which their son died, and she's right. Mickey doesn't seem to care all that much, and even goes so far as to gamble with the money he's collected to pay for the funeral. When he loses, it sets in motion a series of events that should be odd enough to hold our interest, but as directed by Slattery even the most extreme occurrences feel humdrum.

I hate to slam Slattery because I really enjoy his as an actor, but perhaps that's the job he should stick with. A more sure hand could have mined this material for its darkly comic yet philosophical potential, and one can almost imagine the Coen Brothers, for instance, producing a minor gem from the same raw materials. Unfortunately Slattery, who also co-wrote the screenplay with Alex Metcalf, seems at a loss as to what kind of tone to strike, ultimately settling on dull, dreary, and deadpan. 2 out of 4 stars.