[FRIENDED TO DEATH opens in Cleveland on Friday May 2nd exclusively at Tower City Cinemas.] 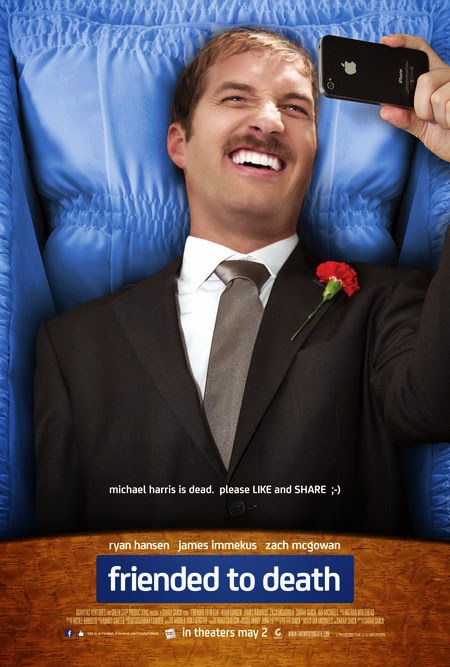 Parking cop Michael (Ryan Hansen) is the sort of minor authority figure who takes genuine pleasure in exerting what small power he has upon the rest of the world. Both while on and off the clock, Michael feels compelled to share his every move and mood via a constant stream of photo uploads and status updates to his 400+ facebook friends.

In real life, the number of actual friends Michael has is considerably lower. Even his fellow parking cops don't like him, and Joel (Zach MacGowan), the guy Michael considers his best friend, has just essentially dumped him for the slightly less obnoxious Kev (Ian Michaels). On the same day that he loses his best friend, Michael also loses his job for posting a picture of one of the cars he ticketed on facebook that shows the license plate, considered under workplace rules to be an invasion of privacy issue.

Without his besty to lend emotional support, Michael winds up commiserating with the socially awkward Emile (James Immekus), a fellow employee who also got canned. Given Michael's limited interests, the conversation inevitably turns to social media. Emile doesn't much care for it it, and he wonders aloud just how many of Michael's facebook friends are friends in the true sense of the word. This is the premise that FRIENDED TO DEATH hinges upon, and it gets put to the test when Michael decides to fake his death online to see how many of his “friends” actually show concern. From here on, the film is a textbook escalation comedy as the deception gets bigger and more difficult to maintain, especially with a mysterious blonde woman (Sarah Smick) threatening to expose Michael's lie.

With FRIENDED TO DEATH director/co-writer/supporting actress Sarah Smick has crafted a smart and funny film that lacks the overly polished, homogenized feel of so many modern Hollywood comedies, nor is it infested with the snarky, hipper-than-thou attitude that has become de rigueur for indie comedies. Smick's direction may not be particularly flashy, but it's solid meat and potatoes filmmaking with impeccable comic timing. It's commentary on the sometimes less than healthy effects of social media are pretty much on the money. That said, it's appreciated that the film doesn't just beat that one idea into the ground, instead drawing much of its humor from the characters themselves. And while the film was made on a low to mid budget (by Hollywood standards, anyway), production values are solid and the film never looks or feels cheap.

There's also a very good cast here comprised of veteran performers with numerous TV and smaller film roles to their credit. They do a great job of bringing to life characters who are almost all unlikeable without ever making the overall film feel unpleasant. You even kind of start to root for Michael, maybe not to succeed in his scheme, but to at least come through it all having learned a lesson and turned his life around.

It may not quite hit the level of comedy classic, but the lack of studio interference combined with the talent and passion of the filmmakers results in a well made and genuinely funny film that would almost surely have been compromised had it been made with a bigger budget and bigger stars. 3 out of 4 stars.
Posted by Bob Ignizio at 1:25 AM