[COLD IN JULY opens in Cleveland on Friday May 30th exclusively at the Capitol Theatre.] 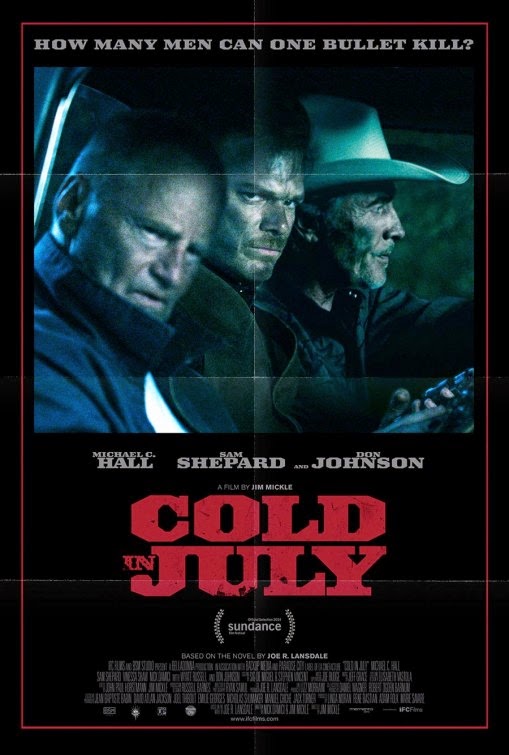 In COLD IN JULY, Richard Dane (Michael C. Hall) encounters a burglar in his home late one night and accidentally shoots and kills the man. The local police assure him he did the right thing, accidental or not. That is not an opinion shared by the burglar's father Ben Russell (Sam Shepard). Ben shows up for his son's funeral and, when Richard tries to apologize, starts making thinly veiled threats against Richard and his family.

It looks like we're heading into CAPE FEAR territory, but then the film throws us a curve-ball. It turns out the man Richard killed wasn't really Ben's son. The two fathers form an uneasy alliance to get to the truth, bringing in private detective Jim Bob Luke (Don Johnson), and old army buddy of Ben's, to help. Not going to give any spoilers here other than to say the deeper they dig, the more shocking the revelations.

Director Jim Mickle and his writing partner (and supporting actor) Nick Damici have crafted a screenplay that stays relatively faithful to the novel of the same name by Joe R. Lansdale, a book which just happens to be a personal favorite. Certainly changes have been made, but the themes remain largely the same, exploring definitions of masculinity, the responsibilities of fatherhood, and the consequences of violence. Some of the humor of Lansdale's book has been toned down, but there's enough of it left to provide some much needed breaks from the tension.

As director, Mickle embraces the late eighties setting of the story. COLD IN JULY boasts a great synth driven score and soft primary color gel lighting, and the story puts the spotlight on ordinary, working class characters. It could almost pass for a lost John Carpenter movie with cinematography by Dean Cundey.

The conflicted, insecure protagonist Hall plays here ought to help him break away from typecasting after so many years playing a cold, calculating killer on Dexter. Shepard makes a great old man you don't want to mess with, and if Don Johnson seems a little bit over the top as Jim Bob, all I can say is he's almost tame compared to how the character was written in the book. As much as I miss some of that, it's probably for the best in maintaining a consistent tone for the film.

While there will always be those who grouse that, “the book was better”, I think most fans of Lansdale's novel will be pleased with this adaptation. Of course Lansdale's readership, though avid, isn't particularly large. For everyone else, if you like the idea of an intelligent, at times darkly humorous thriller that is very much aware of genre clichés and takes great pleasure in subverting them, you can't do much better than COLD IN JULY. 4 out of 4 stars.
Posted by Bob Ignizio at 1:04 AM