[CHINESE PUZZLE opens in Cleveland on May 30th exclusively at the Cedar Lee Theatre.] 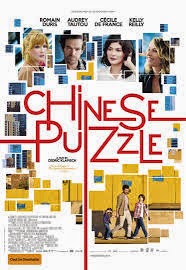 CHINESE PUZZLE is the third in a trilogy of films written and directed by Cédric Klapisch concerning the romantic misadventures of writer Xavier Rousseau (Romain Duris). As the film begins, Xavier is lamenting the fact that his life to this point has no clear goal. He's simply been kicked along by events and gone with the flow. The latest major upheaval in his life is divorce from his wife of 10 years Wendy (Kelly Reilly). It's a more or less amicable split, but when Xavier learns Wendy will be moving to New York along with their two children, the French writer has to scramble to find a way to be near his offspring.

New York also happens to be where Xavier's best friend Isabelle (Cécile De France) lives with her girlfriend Ju (Sandrine Holt). The couple have recently become parents thanks to a sperm donation from Xavier, so they're willing to lend a helping hand until Xavier gets his house in order in America. Not only does that entail finding a place to stay and a job, but coming up with a way to become a U.S. citizen, too. To that end, he reaches an agreement with Nancy (Li Jun Li) to marry her and get his green card. Finally, Xavier's ex Martine (Audrey Tatou) is also in New York on business, and seems intent on rekindling the spark the two once had. That's plenty of characters and situations for one movie right there, but CHINESE PUZZLE requires even more pieces to complete. By all rights the film should feel cluttered and unwieldy, but somehow it never does.

Despite some clever writing and imaginative flights of fancy – personal favorites are the fantasy sequences involving German philosophers – CHINESE PUZZLE doesn't completely avoid rom-com cliché, including that old warhorse, the race to the airport/bus station/whatever to stop the right woman from getting away. But despite a plot every bit as convoluted and far-fetched as any American rom-com, CHINESE PUZZLE has little moments of truth and clever humor (as well as some enjoyable Felliniesque flights of fantasy) to rise above cliché just enough to be a satisfying, if lightweight, entertainment. 3 out of 4 stars.
Posted by Bob Ignizio at 1:00 AM