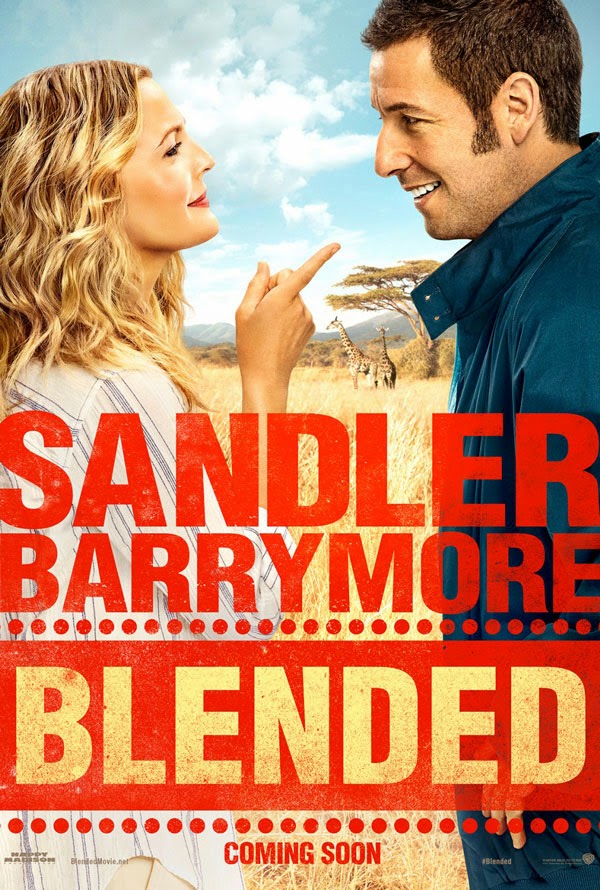 Nowadays when an audience is asked to watch an Adam Sandler movie, it sometimes comes with a huge sense of weariness. In his newest film, BLENDED, we at least get to go to Africa with him.

Sandler plays Jim, a widowed father with three uniquely different daughters. He works at Dick’s Sporting Goods and his restaurant of choice is Hooters. This is where he takes Lauren, played by Drew Barrymore, on their first date. Needless to say it’s a disaster. For a while the audience must make believe that these two just aren’t right for each other.

Lauren is recently divorced with two neurotic sons. Her ex-husband, played by Joel McHale (COMMUNITY, THE SOUP) is a useless and uninvolved father, furthering both of his sons insecurities.

Lauren’s best friend and coworker Jen is dating the CEO of Dick’s (Dick) who also happens to be Jim’s boss. When Jen decides not to go on a trip to Africa with Dick, Jim and Lauren both unknowingly plan a trip using Dick and Jen’s tickets. If it sounds convoluted, it is. The movie seems to know it. It spends no time lingering on plausibility and quickly cuts to everyone in Africa.

Africa is our setting to watch these two “mismatched” couples and families socialize. The results are mixed.

BLENDED marks the third time Barrymore and Sandler have shared the screen together and fourth time Sandler has worked with director Frank Coraci. Their first two efforts, THE WEDDING SINGER and 50 FIRST DATES have aged extremely well as romantic comedies. There is a strange but undeniable energy shared between the two. BLENDED gives that chemistry another shot and while it’s still there, it seems to be limping along at this point.

Too much of BLENDED relies on crude jokes, non-stop insults to characters in the film and quirky supporting roles. This is essentially Sandler’s M.O. and as in past efforts, it’s the quirky supporting cast that really helps his films feel urgent and interesting. The drawback here is that Sandler has a formula and adds absolutely nothing to it in the case of BLENDED.

The supporting cast in BLENDED include Kevin Nealon (SATURDAY NIGHT LIVE), who plays Eddy, essentially reprising his role from HAPPY GILMORE except he’s in Africa now and, somehow, it’s still funny. Terry Crews (BROOKLYN NINE NINE) is also sure to delight audiences as he periodically appears as the resort singer/entertainer. He pops up at random moments and is usually a welcome reprieve from some of the sappy and contrived storyline.

Adam Sandler’s career has become its own story. It’s a fascinating evolution that, when looked at closely, would baffle anyone. In its infancy it seemed Sandler would become the hero of dumb but lovable movies such as AIRHEADS, THE WATERBOY, BIG DADDY, BILLY MADISON and HAPPY GILMORE (the latter two are classic comedies in my book). Even some of his lesser comedies, which remain dumb and kind of lovable, have devout followings, including, LITTLE NICKY, CLICK, THE LONGEST YARD and MR. DEEDS.

Sandler also tried his hand, and quite successfully, at dryer more interesting roles such as REIGN OVER ME, FUNNY PEOPLE and PUNCH-DRUNK LOVE (easily his best performance to date). Even in the case of BLENDED, Sandler is at his best when presented with some sobering moments. Barrymore thrives in this arena as well.

However, in-between many of those films Sandler has taken on near unbearable work, going from dumb but lovable to just plain dumb. DON’T MESS WITH THE ZOHAN, the GROWN UP films, JACK AND JILL, THAT’S MY BOY, JUST GO WITH IT and I NOW PRONOUNCE YOU CHUCK AND LARRY comes to mind. For every gem Sandler gives us, there are too many worth forgetting about. Even still, Sandler fans are loyal.

Many will find something to like in BLENDED, and to be sure, it stands above many of the previously mentioned “dumb” movies. Still, the film never feels authentically funny. The laughs are cheap and are far too clichéd in many cases to be excited about.  The urgency of Sandler’s 1990’s films has all but disappeared. I don’t believe time will be as kind to BLENDED as it has been to THE WEDDING SINGER and 50 FIRST DATES.

In a way, Sandler seems to be making films for people in his age-span: youngish to middle-aged parents who just want something to relate to at the movies. Good for those people, but bad for the rest of us.