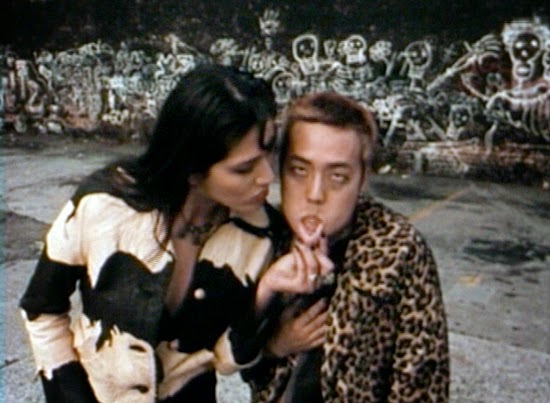 John Moritsugu has been making committing his unusual visions to cinema since 1985, usually in collaboration with his wife Amy Davis. He kept up a fairly steady pace, releasing such features as MY DEGENERATION, MOD FUCK EXPLOSION, and SCUMROCK until writer's block struck for about a decade. He finally got past that with the help of Davis, and the result is his latest film, PIG DEATH MACHINE, which screens this weekend at the Cleveland Cinematheque. I recently had the chance to ask John about his career and latest film, and this is what he had to say.

CLEVELAND MOVIE BLOG: What got you interested in filmmaking, and specifically, what drew you to underground/avant garde/whatever you want to call 'em type movies?
JOHN MORITSUGU: Ever since I was a kid, I was interested in putting things together, taking things apart, you know, that destroy/create ethos... so of course, the choice was between being a surgeon or a filmmaker. I told my uncle these plans when I was 8 and he told me to go into film cuz it was "cooler." I agreed and here I am now, traveling down that twisted road to cinematic ruin. As far as types and genres of films, I am not prejudiced. I like as many mainstream films as underground. I mean, THE TERMINATOR rocked my candy ass way harder than all of Man Ray's experimental stuff put together. Film is film - it can suck or be sublime. The coin that went into it and the genre really don't matter to me. That said, I really dug Jarmusch's new vampire flick.

CMB: Some people tend to look at movies like yours and assume they are weird for weird's sake. Even though I don't think I completely “got” the movie, I definitely had the sense that wasn't the case here. So help me out a bit – what was the inspiration for the film, and what were you trying to get across thematically?
JM: Amy (my wife of 20 years and cinematic partner in crime) and I were just talkin', you know, stuff like GENIUS=MADNESS and dreams getting realized and sliding into nightmarish realms. Okay, FAST FORWARD 5 years, and we're watching PIG DEATH MACHINE at the Hawaii International Film Festival and both thinking that the movie is gonna look really tame and normal.... and halfway through the screening, she leans over and sez, "This movie is really WEIRD... like fucking WIKKED-HELLA WEIRD!" It was a funny moment cuz we don't generally think we're too out there or strange, but sometimes reality just whips around and slaps you in the face like a piece of cold bologna. As far as the theme of the film, it's basic: ENVY. Both leads envy shit. One yearns to live in a world devoid of humans and just bliss out with her botanical buddies. The other is a twit but knows it and desires the brains to not only understand life, but to also be able to order haute cuisine at lunch. As far as movie inspirations, they are for me (and not in this particular order): cheese pizza with truffle oil in Switzerland in October, Black Flag (the band, not the insecticide), the smoggy beauty of an industrial sunset, and anything in life that grabs you by the collar and makes you FEEL. Oh and my wife bitching at me for 10 years to make a FUCKING MOVIE! Writer's block sucks.

CMB: I keep seeing in all the reviews of PIG DEATH MACHINE the comparisons to John Waters and Nick Zedd. I can see that, Zedd probably more than Waters, but I also sense a Gregory Dark or maybe Rinse Dream influence in the vivid color palette, weird animal masks, and anti-erotic sex scenes. Am I in the ballpark at all?
JM: Oh yeah, you're totally there! And you can also add a sprinkle of Jodorowsky, Cronenberg, 70's Japanese Kikaida TV shows, kung-fu theater, and PUNK ROCK. When MOD FUCK EXPLOSION opened in Los Angeles, it ran for 11 weeks and Gregory Dark was there a few nights in a row checking it out, taking notes, and guffawing from the back row. On another note, John Waters sent me a fan "KEEP ROCKING" postcard back in 1989 after MY DEGENERATION played at Sundance. He actually loves PIG DEATH, not to name drop, but I must speak the truth. I still have that postcard.

CMB: As out there as the film is, and despite the intentional shot on video look, I thought PIG DEATH MACHINE still looked and felt professional. In particular, the editing really has a nice flow to it that keeps a viewer engaged even if he or she doesn't necessarily “get” what's going on. So, to finally get to an actual question, given that you clearly have the skills to work on something more mainstream, I'm curious why you haven't done crew work on other people's films to help finance your own work, or even done a quickie for hire piece as a director on some low budget horror film or something. Or maybe you have under a pseudonym?
CMB: Thanks for the editing/directorial props! I feel that the editor is GOD on a movie and can influence the picture more than anyone else, which is why I keep all editorial matters in my supple and powerful grip .Amy is actually the reason for the films LOOK. She's a RISD kid and knows all about film timing, color and tweeking. Plus Todd Verow (the master of digital video and my DP of 22 years) is a lighting and shooting genius. Though I haven't done much crewing, I have shot some music videos for bands.... In 2012 Amy and I got a Grammy Nomination for a video we co-directed for TV ON THE RADIO. The song is “No Future Shock” and it's filled with tons of glitter and sweat. As for why I haven't gigged on other people's films, it isn't ego, it's just luck. I haven't ever been asked, it just doesn't manifest. Hook me up bro!

CMB: Why did it take over a decade between your last feature, SCUMROCK, and this one?
JM: That can be chalked up to a major creative/writer's block, mid-life crisis and huge debt. Amy helped me to get past this all this shit by lighting a fire under my ass and cajoling me into making PIG DEATH MACHINE. This one was the hardest movie for me to make...Hallelujah it exists!

CMB: You're very fortunate to have a wife, Amy Davis, who shares your artistic bent and sensibilities. What are the pros and cons of working so closely with the same person you go home to at the end of the day?
JM: As I just mentioned, it is SO GREAT to have someone on your side to co-create with, someone who is watching your back and keeping you inspired and motivated. She's transitioned beautifully from being my "leading lady" to being my artistic-partner-in-crime who is also the FACE of the cinema of Apathy Productions. Of course, there is a downside to this, like romantic moments transmogrifying into movie shop talk about camera angles, casting, distribution... creative arguments that can last for years....  not being able to see movies to escape cuz they're too much of a reminder of the work to be done. The male ego VS. the female ego, who knew it's THE SAME EGO! I'll take it all, though, cuz it is the best life possible.

CMB: Your widest exposure to date is probably through the use of clips from MY DEGENERATION in Greg Araki's DOOM GENERATION. Where is the line drawn between films like Araki's – which are definitely for a cult audience but still get some limited theatrical distribution – and your own work?
JM: I don't think there has to be a line between our films... we both started out in the 80's making wickedly cheap movies that still delivered the artistic and cinematic "goods." And though it might seem that we're on slightly divergent paths, we're both just punk rock (Gregg is maybe a bit more "new wave") nerds with great record collections. He's actually an old pal. He used Amy's name for Rose McGowan's character in DOOM GENERATION and then her character's name (LONDON) from MOD FUCK EXPLOSION in KABOOM. I guess it's a homage.

CMB: You used kickstarter to fund PIG DEATH MACHINE, which seems to be the popular way to get financing for projects traditional investors don't see as having enough return on them. How was your experience with that, and do you think it will ultimately make it easier or harder for you to get funding for your films?
JM: I love kickstarter. It worked out great for us and people really tuned in and turned up the moolah knob. Without kickstarter, we'd still be trying to edit PIG DEATH MACHINE on a 10 year old Mac with imovie. So many traditional funding sources have dried up or gotten waaaaay too conservative so it is good that the $ can go straight to the movies without having to navigate through the bullshit of the dominant hegemony.

CMB: As hard as funding films like this is, it's just as hard if not harder to get them exhibited. In theory, digital distribution could change that since you no longer have to worry about film prints, and I have seen that help a bit with smaller mainstream films getting a one-week, one screen run here in Cleveland. I'm curious, though, if that's helping at all for films like yours?
JM: Yeah, distribution is a doozy. Sometimes its even tougher than making the movie. But digital distribution has it's upside - no more expensive prints (that eventually wear out) + shipping costs... and the internet has proven to be thee new movie theater. But alas, bit torrents and pirates keep the money out of filmmaker mitts, and I do miss the experience of wiping my popcorn greased hands on worn velvety theater seats. Call me sentimental...

CMB: That's about it. Anything you want to add that I didn't ask about?
JM: LIVE THE DREAM-EAT THE CREAM- MAKE EM SCREAM