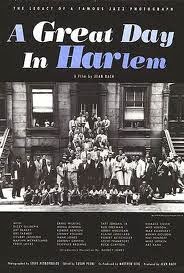 A GREAT DAY IN HARLEM is a nicely-tuned hour, sweet and nostalgic stuff for the eyes and even to viewers for whom jazz music holds minimal interest.

The 1994 short feature tells the story behind the famous Esquire Magazine photo of 1958, for which young shutterbug Art Kane put out a call to all the great jazz artists in New York City to gather for a single group portrait on a Harlem stoop at 10 a.m. in the morning on August 12. Kane was amazed when practically all of the notoriously night-owl musicians (it was said jazz players didn't know there were two ten o'clocks in one day) really did show up.

Here were Dizzy Gillespie, Art Blakey, Charlie Mingus, Gene Krupa, Count Basie, Maxine Waters, Thelonious Monk, Roy Eldridge, Lester Young, Coleman Hawkins, Sonny Rollins and 48 other luminaries. The wonder of the thing was that many of these music greats had never met before, and, as they'd brought instruments, the photo session turned into a jam session and impromptu block party.

While Kane got his famous one-in-a-lifetime group shot, musician Milt Hinton realized the importance of the event, and he snapped away with his own Leica, while his wife backed him up by shooting color home movies. That precious footage was presented here for the first time by filmmaker Jean Bach. Surviving jazzmen and passersby who were only kids at the time remember that day, as Bach shows Kane scanning his original negatives and contact sheets under a magnifying glass. Every picture tells a story, and this one's a keeper. The picture that was worth a thousand words and so many more clef notes.

Sadly, shortly after this was released, Art Kane, in failing health, took his own life. The illustrious 8/12/58 Esquire photo shoot went on to inspire a children's picture book and served significantly as a plot device in Steven Spielberg's culture-shock comedy THE TERMINAL, with Tom Hanks.

I am given to understand there is breaking news that A GREAT DAY IN HARLEM will be doubled-up with a short subject, newly made under the auspices of the Cuyahoga Community College film program, called  A GREAT DAY IN CLEVELAND. It recalls how 59 illustrious photojournalists from around the world assembled for a once-in-a-lifetime photo op in Cleveland recently - to take the news pictures when a local resident actually located a job opportunity. Okay, just kidding about that last part. This thing is jazz-related too. Pity I'm just a joker; this town could use a job opportunity. (3 out of 4 stars)