Vincent: The Life and Death of Vincent Van Gogh (April 27th and 30th at the Cleveland Museum of Art)

[VINCENT: THE LIFE AND DEATH OF VINCENT VAN GOH screens Sunday April 27th at 1:30 pm and Wednesday April 30th at 7 pm at the Cleveland Museum of Art) 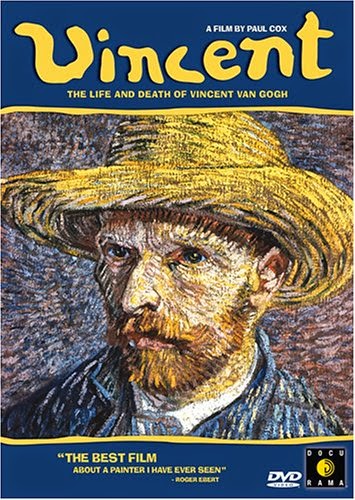 This 1987 documentary from Australian filmmaker Paul Cox ties in the with the new Vincent Van Gogh exhibition at the Cleveland Museum of Art (credit where credit is due, however; the Toledo Museum of Art had a show starring the culty French Impressionist about a dozen years ago). Cox, who would later give the same sort of treatment to NIJINSKY: THE DIARIES OF VASLAV NIJINSKY, tells the story of Van Gogh's life through his own words and pictures.

The wall-to-wall narration, bracingly read by thespian John Hurt, is taken entirely from Van Gogh's letters, mostly to his brother Theo (although there is included the momentous letter asking fellow impressionist Paul Gauguin to move in with him at Arles).

The artist's thoughts are illustrated by a finely chosen exhibit of paintings, drawings, and live recreations, including most notably a tableau vivant of "The Potato Eaters," slowly assembled as the figures enter one by one.

A few pointless shots of pigeons in church rafters were recycled for NIJINSKY. The narration is more rigorous and less pretentious than in the other film, though both men ended up in the loony bin (which ought to tell you something about a career in the arts). The Vincent of VINCENT mostly restricts his musings to his painting techniques, avoiding politics and other subjects outside his experience, and this features an impressive catalog of his actual work onscreen. The subjective camera POV death scene is kind of lame, though. Robert Altman's excellent drama VINCENT AND THEO probably stands out as among the many, many scripted scenarios covering much of the same ground. (3 out of 4 stars)
Posted by Charles Cassady Jr. at 2:46 PM