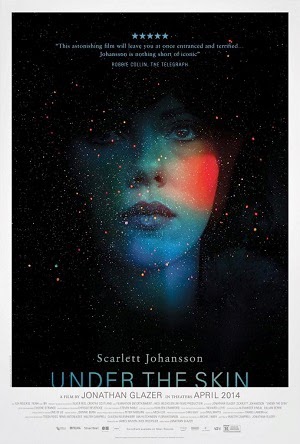 Jonathan Glazer's sci-fi movie UNDER THE SKIN was ten years in the making. “It was very easy to spend that much time on the film,” says the director, best known for SEXY BEAST.” “I wanted to keep going [to] make something that...was a kind of experience that matched the perspective of the character.”


It is an experience, all right, but not necessarily the kind most viewers will embrace. The movie stars the ubiquitous Scarlett Johansson as an alien who inhabits the body of a young woman and roams the Scottish Highlands in a van, luring young hitchhikers to their deaths. Not all of this plot exposition is obvious to the audience, who after watching this highly abstract, nearly dialogue-free film, may wonder what the hell it was all about. The cinematography and effects are often mesmerizing, and were this a film-school exercise or twenty-minute short for art class, it would deserve an 'A.' But a theatrical film should not ask an audience to watch an arty exercise for an hour-thirty-eight and essentially make up its own story.

The movie is based on a popular macabre thriller by Dutch-Australian author Michel Faber. Director Glazer called the novel “a great book, but a trashy book,” and maybe his disdain caused him to retain only the sketchiest outlines of the story and make its heroine, Isserley, nameless and opaque. The book, which I've only glanced through, is told largely from Isserley's point of view. Johannson's alien is a pretty, dark-haired cipher who speaks in an awful English accent, asking directions and offering rides to various Glaswegian males, who can't believe their good luck. (Interestingly, the young men are non-actors who were initially unaware that they were being filmed. Kind of like BORAT.)


Ms. Alien drives each pick-up to a secluded setting, and the poor sod's fate is depicted in a highly stylized manner. The men strip naked and follow her beckoning, nude form, descending into a pool of liquid. The staging of these scenes, with only the bodies of the men and Johannson illuminated, is striking in the manner of modern dance or performance art.


In another sequence, Johannson's character witnesses a drowning at the beach, kills a would-be rescuer, and allows the drowning victim's baby to cry helplessly on the beach. Apparently, this is meant to demonstrate her lack of conscience. When Ms. Alien later picks up a man with a severely deformed face and treats him kindly, I am told it is supposed to illustrate her growing sympathy for the human race. Who knew! None of these interpretations, mind you, is evident from watching the film, nor is the ultimate purpose of her harvesting of bodies revealed, as it is in the book.

The film is replete with stunning imagery – the gleaming nighttime landscape as Johansson's character drives around hunting prey; a wonderful time-lapsed sequence of an ordinary day on the streets of Glasgow; strange, psychedelic depictions of the transformations of the victims' bodies. It's not surprising that the visuals are of a high order; Glazer is well known as a director of stylish TV commercials and music videos. His approach to this material — dispensing with clear narrative in favor of almost pure abstraction — could be considered radical, or wrongheaded. I think it's the latter. 2 out of 4 stars.