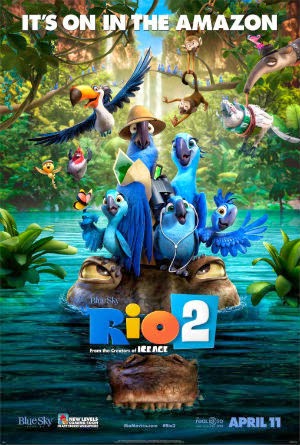 Former pet bird Blu (Jesse Eisenberg) has been successfully reintroduced into the wild and has learned to fly.  He and soul-made Jewel (Anne Hathaway) now live atop a sunny sanctuary with their three kids, who between them display all the quirks of your typical teenager:  chubby Carla (Rachel Chow) is musically-inclined daughter with an attitude; brainy Bia (Amandla Stenberg) is a petite Jewel clone; and free-spirited son Tiago (Pierce Gagnon) is a goofy miniature version of his dad.

Blu likes hanging out with his progeny, who embrace all the accoutrements of human ingenuity, much as he did in the original movie.  Carla listens to an iPod, Bia’s a bookworm, and Tiago enjoys pancakes.  But the family decides to get wild and head for South America after a TV news bulletin touts the discovery of an entire flock of Spix’s macaws in the Amazon.  Jewel is particularly eager to meet other birds of their breed, since it was long-thought she and Blu were the species’ sole survivors.  Blu—who wears a fanny pack and relies on a GPS device for navigation—isn’t so sure about the pilgrimage.

The family is accompanied on their thousand-mile flight by yellow canary Nico (Jamie Foxx) and red-crested Cardinal Pedro (will.i.am), who hope to audition talented jungle animals for next year’s Carnival.  Rafael the Toucan (George Lopez) tags along, constantly reminding reluctant Blu that a happy wife means a happy life.  Slobbering bulldog Luiz (Tracy Morgan) catches up with everyone later.

Turns out it was Blu’s former owner, Linda, who discovered the endangered macaws while on safari with ornithologist husband Tulio.  The nature-lovers are ecstatic, but the thugs behind a nearby logging operation will stop at nothing to silence the “tree-huggers,” lest news of the bird haven halt their illegal slash-and-burn efforts.

The middle of the movie is a hodgepodge of subplots we’ve seen elsewhere, including other recent CGI cartoons.  Jewel’s reunion with her father, Eduardo (Andy Garcia) smacks of the lion linkup in MADAGASCAR 2: ESCAPE TO AFRICA, as does Blu’s rivalry with robust, handsome alpha male Roberto (Bruno Mars)—who would’ve been Jewel’s mate.  Eduardo reluctantly teaches civilized Blu the laws of the jungle, poo-pooing his every move, as daughter Jewel soaks up the fresh air and the grand-kiddies bond with their kin.  Meanwhile, evil cockatoo Nigel tracks the macaws in hopes of exacting revenge on Blu, who cost him his wings.  Nigel’s joined by silent, obedient anteater Charlie (whose slithery tongue becomes a running sight gag) and devoted tree frog Gabi (Kristen Chenoweth)—who secretly dotes on the theatrical villain but can’t act on it because of her toxic touch.

Blu unwittingly messes things up for Eduardo by accidentally encroaching on territory belonging to a pack of Scarlet Macaws.  Their macho leader, Felipe (Philip Lawrence), challenges Blu to an all-or-nothing battle for rights to the rainforests’ bounty of Brazilian nuts in “The Pit of Doom,” but Eduardo tasks the more capable Roberto with settling the score.  Predictably (but not un-dramatically) both bird clans come to realize the error of their ways:  The loggers have kidnapped Linda and Tulio, and their ongoing deforestation will destroy all the animal homes (and food supply) if they aren’t stopped.  Blu tries convincing Eduardo that they must free the biologists and help stop the lumberjacks.  The crusty macaw isn’t sure any human can be trusted, but Blu—who knows otherwise—rises to the occasion and rallies the Amazonian creatures for a climactic “this land is our land” showdown (see OPEN SEASON).

Credit Saldanha and his writers with injecting their Technicolor family reunion tale with topical, important ecological messages (a la AVATAR) on the increasingly askew balance of Man vs. Nature.  Hopefully, younger viewers might start asking questions about how they can play a part in righting some of mankind’s wrongs and will eventually take up the torch when it comes to safeguarding the delicate symbiotic relationships that exist between man and beast.
RIO 2’s requisite musical numbers aren’t as memorable those in runaway hit FROZEN, but they’re often inspired and funny:  Bruno Mars’ Alberto sings “Welcome Back” to Jewel; Nigel and Gabi duet on a cover of Gloria Gaynor’s “I Will Survive” and the ballad “Poisonous Love;” Philip Lawrence’s red macaw warns “It’s a Jungle Out Here;” Janelle Monae and cast ponder “What Is Love;” and even Garcia’s paternal Eduardo gets a tune of his own.  The score also features music by San Paulo percussion group Barbatuques and Brazilian greats Carlinhos Brown and Milton Nascimento.  Slow-motion yoga tortoises, a rapping sloth, and a mosquito symphony also contribute to the colorful, kinetic finale. 2 ½ out of 4 stars
Posted by Peter M. Roche at 12:46 AM