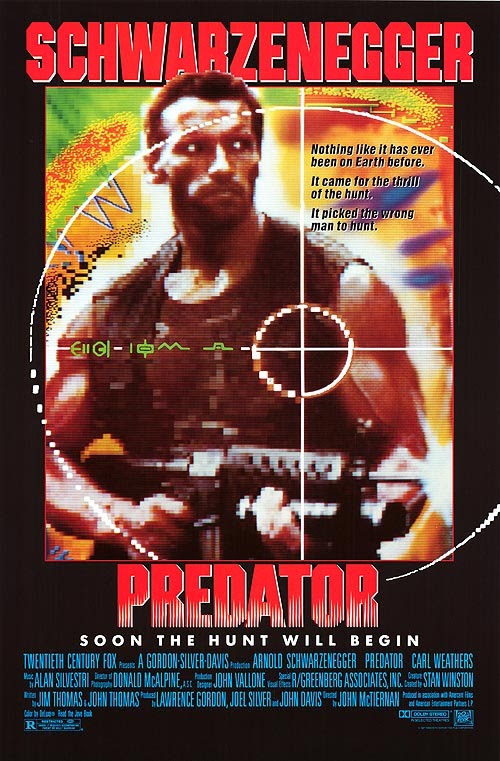 The Case student film society display a bit of a sense of invention this week in reviving the original ALIEN back-to-back with the original PREDATOR. Hey kids, before you graduate into a no-job-opportunities world that's REALLY scary, get set for a creature-feature flashback weekend! Once you learn how many fruitless employment applications you're going to have to complete before going into the military out of pure desperation and face those nervous night patrols in Afghanistan, killer monsters from outer space don't seem quite so threatening anymore.

The original PREDATOR, from 1987, has gotten cited by culture-watching scorekeepers as one of the ultimate "guy movies" (I'd vote for something WW2 like GUNS OF NAVARONE or KELLY'S HEROES or THE GREAT ESCAPE, but nobody ever asks me). PREDATOR is a hyper-macho spectacle of biceps, bombs, guns, and catchphrases by bigger-than-life actors, like the line - the one with the least swear words - uttered by pro-wrestler and subsequent conspiracy-mongering politician Jesse `The Body' Ventura, "I ain't got time to bleed!"

(And even that actor was smart enough to oppose the Iraq invasion, while our leading candidates still aren't. That's scary too).

If you watch PREDATOR purely as a jingoistic sci-fi action boys' cartoon, that's pretty much the way to take it - very much in the spirit of star Arnold Schwarzenegger's earlier zero-brain actioner COMMANDO, just with a fairly awesome alien dropped in. Setting is the embattled Latin-American rain-forest jungles where a team of super-commandos - who look more like G.I. Joe dolls than anybody in G.I. JOE - RETALIATION did - assemble as a hired US military rescue mission. Supposedly the mercenaries are here to liberate hostages from leftist guerillas. Only after eliminating the foes in a firefight do the swaggering heroes, led by the oak-tree-like Dutch Schaeffer (Schwarzenegger) find out they were duped by the Pentagon into destroying a secret Soviet spy-invasion camp.

For some reason, the mercs are unhappy about killing a bunch of Russian-backed left-wingers who weren't the same Russian-backed left-wingers they thought they were going to be killing. Huh? Well, there was a lot about the Reagan years I still can't quite comprehend. Maybe he's got a good case for seizing bits of Ukraine, maybe not, but I am not happy Vladimir Putin seems to cue the resumption of the Cold War. It never was the USA's finest hour.

As all moviegoers know, the commandos straightaway have worse problems. A UFO happens to be landed nearby, and a deadly occupant watches all the bloodshed eagerly. The ugly-faced visitor - and again, this isn't an original premise either, having been done most notably by the B-cheapie WITHOUT WARNING - is a tall, vicious alien equivalent of a big-game hunter. Having killed and skinned a bunch of guerillas and Green Berets for trophies, it now goes after the commandos. Dutch has to figure out how to defeat the merciless Predator despite its invisibility technology and superior death-ray firepower. The alpha human eventually ends up stripping down to basic hand-made booby-traps and snares, just like the Ewoks in STAR WARS: THE RETURN OF THE JEDI.

Or like the Viet Cong against the US military in real life. Though you can't really find much of a "message" in this movie, except that massively-weaponed action-musclemen grunting catchphrases were box-office gold in the go-go 1980s. So were space aliens, a lot of the time. Director John McTiernan put the two together, and, well, you got PREDATOR. When cast members - most of whom we've seen savagely slaughtered - reappear and smile over the end credits to take bows, as in a community-theater play (or Pro Wrestling), the effect is positively disarming, in a relax-we're-just-putting-on-a-show goofball way.

Amazing book fun fact: the paperback novelization of PREDATOR was penned by a hired-gun author, Paul Monette, who is best known as a popular gay literary essayist who searingly chronicled the AIDS plague until it claimed his own life. I am pretty sure he just did the Predator project for the money - like everyone else. PREDATOR is at least more fun than its 1990 sequel, PREDATOR 2, in which the same alien species went hunting gangstas and FBI in a stereotypically hyper-violent Los Angeles, with Danny Glover grievously miscast in the Arnold role as a one-man army cop. After that the creatures mainly appeared in video games and crossover comic books (Batman fought the Predator, and I am rightfully ashamed I know that), until the Predators were double-teamed with the Aliens from ALIEN in a couple of later sci-fi potboilers. It represented a career boost for the Predator franchise, but kind of a comedown for the Aliens, which ought to tell you something. (2 1/2 out of 4 stars)