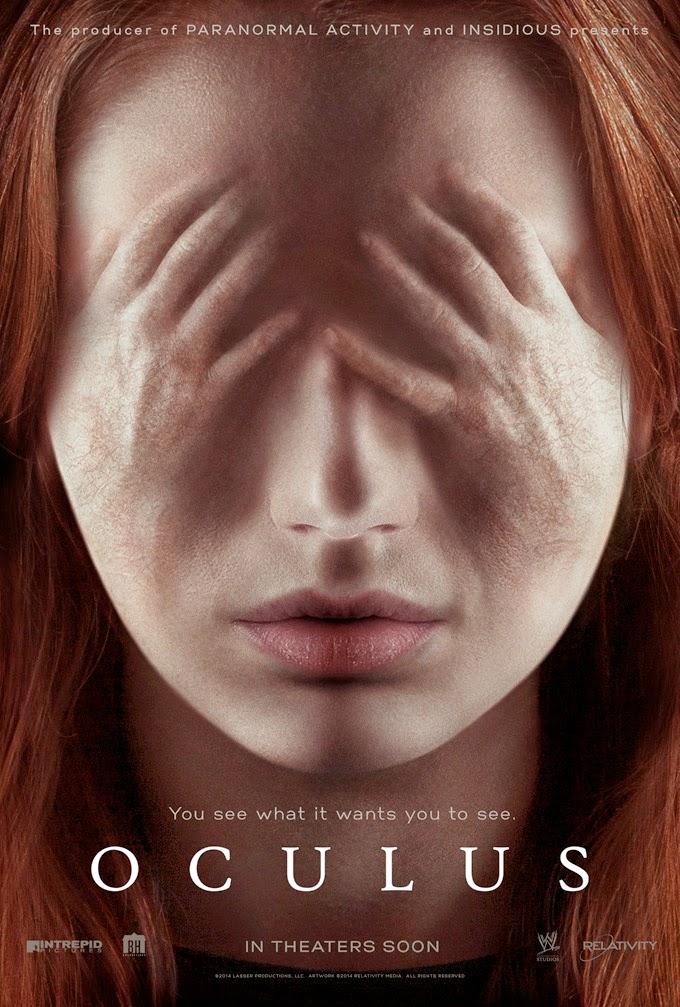 If I were to tell you OCULUS was a film about two people trying to kill a mirror, you might feel inclined to pass on it. Don’t, it’s worth a serious look. You might not know anyone who made the film or the actors in it. Even director Mike Flanagen is a relative newcomer (though won’t be for long), but OCULUS is sure to please those looking for a scare.

When young sister and brother Kaylie (Annalise Basso) and Tim (Garrett Ryan) move into their brand new home, their father also purchases an antique mirror for his office. Things turn sour in a hurry, particularly between mom and dad, and the children are faced with constant bickering between their parents and accusations that dad is having an affair with a woman in his office. Things take a murderous turn shortly after. The question as to why these string of tense and peculiar events happen is what the movie revolves around.

OCULUS begins with adult Tim, played admirably by Brenton Thwaites, being released from a mental institute eleven years after the family tragedy. His big sister Kaylie, played awkwardly by Karen Gillan (DR. WHO, GUARDIANS OF THE GALAXY) has been waiting for his release so they can go about fulfilling a promise made eleven years prior: kill the mirror. Kaylie is convinced the mirror was responsible for the decay of her family. Tim, seeking to not stray away from his therapy, isn’t so sure.

Nevertheless, he made a promise to help Kaylie. The mirror appears to have patterns such as turning off lights, killing plant life, causing pets to vanish, playing mind games and so much worse. OCULUS isn’t just a literal film about an evil mirror, but it’s also a brain twister at times. It does what all effective horror films do - it doesn’t just aim to scare, it gives the audience and characters psychological obstacles and questions that need answering. In this case, what in our memories is real and what is invented and can we ever really know which is which?

Kaylie’s incentive as to why the mirror must be destroyed isn’t laid out for the audience until well into the movie. Kaylie’s way of going about killing the mirror never makes a whole lot of sense and at times the movie seems reluctant to even try to explain the strategy behind her master plan. Even as Kaylie reveals her motives to Tim, it all seems sort of gray, both to Tim and the audience.

The film often fluctuates between past and present. Not simply a storytelling device, the film hinges on the back and forth. The storytelling can sometimes seem disorienting, but OCULUS never treads into the obscure and incomprehensible. You’ll walk away with a sense of clarity, even if it fills you with dread.

Although not overly original, OCCULUS is nonetheless entertaining. A small budget flick disguised as a modern big studio horror film, OCULUS seems to share some of the feel of recent horror-hits such as INSIDIOUS and THE CONJURING. Haunting imagery is seen throughout, surround sound is crucial in delivering the scares, and the pacing is pretty slow in its first half. OCULUS takes its time, but it’s necessary for the movie to make any real sense. For my money, it’s certainly just as memorable and fun as the other horror films mentioned.

The jumps and scares are waiting for you, but you must be patient. You must be willing to dismiss the absurdity of the premise and embrace OCULUS for what it is: a silly, scary good time. 3 out of 4 stars
Posted by Joseph Anthony at 12:59 AM