Marnie (April 24th and 25th at the Cleveland Cinematheque) 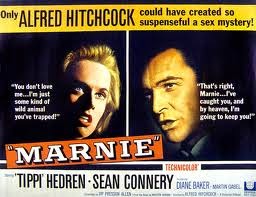 With few exceptions, critics regard 1964's MARNIE as one of Alfred Hitchcock's more disappointing pictures - though, considering that the Master of Suspense had just delivered PSYCHO and THE BIRDS, it had some hard acts to follow. And, if one swallows the a la mode film-lit publishing dogma (recently dramatized in a few motion pictures), one is given to understand that Hitchcock was not only a virtuoso suspense-film storyteller but a genuine depraved personality whose movies can be interpreted as abnormal-psych evidence (oh, but Hollywood was sooooooo grateful to make money off him while the gentleman was alive). MARNIE, therefore is full of meaty Freudian-interpretation stuff for savvy viewers.

(Personally, I'd think you wannabe profilers would be more useful to society scrutinizing the films and possible criminal MOs of Woody Allen, Roman Polanski and - we're now told - Bryan Singer. But I guess that would affect finances of present-day movie studios and their parent multinational corporations. Now that would be a real crime. Nothing to see here, move on people. Go to that MARNIE showing in 50th-anniversary revival instead.)


Hitchcock's dark romance, "sex mystery," as the blurb-writers of its era called it, deserves a second glance in any case, for its complex themes and remarkable cast (and what the heck is a "sex mystery," anyway?). Tippi Hedren, the frosty, blonde Hitchcock "discovery" cast in THE BIRDS plays the title character, Marnie Edgar, a compulsive thief on the Eastern Seaboard with a pattern of getting jobs under assumed names, then stealing from successive employers and walking away, erasing her identity in her escape.

Okay, three things: (1) Amounts of money we find out she's taken in these meticulous capers, like ten thousand dollars ($10,000), will just make you want to weep. Now, in local government, if you haven't nicked at least that much in one month, HR will put you on notice. Don't want any slackers in Cuyahoga County!

(2) It's kind of a given that career criminal Marnie is fiendishly successful at getting fresh work because she's good looking, and her bosses are lusty, dumpy, grumpy middle-aged men. I think much of the employment marketplace still indeed operates that way, only these Great Recession days you've political correctness and "feminism" in addition dictating that women get handed what few jobs are available. The Marnies of 2014 may as well confess during the interview that they'll probably rob the till. They'll get hired anyway. Likely by Barack Obama Executive Order.

(3) The folded-over valise that Marnie is carrying holding her loot at the beginning - is it supposed to look like female genitalia? Or am I just warped and pervy from all the sick gossip I've heard about Hitchcock? Maybe I should gaze at some ink blots.

We are tipped off early that cool, sophisticated Marnie, like Holly Golightly in BREAKFAST AT TIFFANY'S (book and film) hails from rural poor-white origins, and some of her pathology arises from an obsession to transcend the sordid world in which her slatternly maw (Louise Latham) raised her. Then, out for a new score, Marnie applies for a secretarial position at Rutland, a family firm run by young widower Mark Rutland (aye, Sean Connery). Maybe the Winston Graham source novel for MARNIE, that I've never seen, explains how Mark's wife died. But we don't learn anything about it here, except the handsome but steely, not particularly grieving "licensed to kill" hero keeps a display-case of mementoes, kind of Bluebeard-like.

Rutland recognizes Marnie as the femme fatale who's been ripping off business associates, but he foxily lets the new hire go through with breaking into his safe. With evidence of her guilt, he blackmails Marnie into marrying him, claiming that he's genuinely fallen for her. Still, their honeymoon cruise is cold and traumatic. Mark has to coach Marnie on how to fit in with his mansion-dwelling upper-class family, who, ironically, look askance at trapped Marnie as being some kind of gold-digger interloper from parts unknown.

Especially suspicious of Marnie is Mark's own sister (Diane Baker), whose possessive hovering and kissy-face stuff around her virile brother suggests, what exactly? Latent incest? Or Charles Cassady being more pervy? Hey, those sleaze websites were already bookmarked in the laptop when I bought it at the thrift store! And I can't log on with old Netscape Navigator anyway! I swear!

Ultimately, Mark's sleuthing uncovers the hideous truth behind Marnie’s mania, though it’s not too much of a spoiler alert to find out that her insane phobia about the color red means something very nasty occurred in Marnie’s youth. Sean Connery’s hard-driving husband is surely one character who has improved with the times; dude doesn’t just indulge in tough love, he’s into sadistic love. No kidding, controlling Mark Rutland would be a dream date for the Fifty Shades of Grey porn-reading mom demographic of the 21st century.

One positive reviewer called MARNIE the most “poetic” and “liberated” of Hitchcock’s films, and even said that the tacky rear-projection in the driving scenes were deliberate artifice to reflect the heroine’s damaged POV. Well… I don’t know about that part. But the movie isn’t the writeoff that so many movie guides claims it is. (3 out of 4 stars)
Posted by Charles Cassady Jr. at 2:24 PM