Jimmy P.: Psychotherapy of a Plains Indian (April 18th and 19th at the Cleveland Cinematheque) 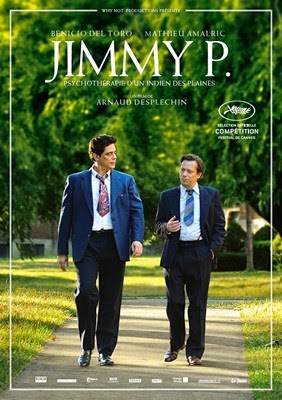 If you can overlook the fact that it looks, feels and sounds nothing like any previous Arnaud (“A Christmas Tale,” “Kings & Queen”) Desplechin film, “Jimmy P.: Psychotherapy of a Plains Indian” is something altogether extraordinary. A true-life story of Post Traumatic Stress Disorder (PTSD) as experienced by the titular WW II veteran and the doctor who treated him, “Jimmy P.” is one of the best movies I’ve ever seen about the psychoanalytic process. There’s a lot of talk here—splendidly written dialogue by Desplechin, Kent Jones and Julie Peyr—but Desplechin is such a dynamic filmmaker that it never feels remotely static.

PTSD didn’t really become a medical phenomenon discussed in polite society until the post-Vietnam era. Yet there are probably recorded cases of soldiers in ancient Greece and Rome who suffered from the wages of battle. John Huston’s brilliantly unsparing 1945 documentary “Let There be Light” examined WW II veterans with PTSD, a yet unnamed malady. It proved such a hot potato for the U.S. military that the movie was effectively hidden from public viewing for 35 years.

Based upon “Reality and Dream,” a book-length case study by French ethnologist/psychoanalyst Georges Devereux (beautifully played in the film by Desplechin muse Mathieu Amalric), “Jimmy P.” actually reminded me more of Terrence Malick than any previous work by Desplechin—that is, if Malick ever chose to tell a story “straight.” The emphasis on natural beauty (Stephane Fontaine was the nonpareil director of photography), a contemplative, unhurried pace and the unconventional narrative structure with poetic flashbacks (think waking dreams) and frequent dispatches of hushed voiceover narration to help get inside the heads of the characters all felt very Malick-y to me.

When we’re first introduced to Blackfoot Indian/WW II vet Jimmy Picard (Benicio del Toro in a career performance) in 1948, he’s struggling to keep it together after returning from the European front. Every day is a struggle to maintain his precarious sanity which is ebbing away like grains of sand in an hourglass. It’s only a matter of time before Jimmy’s understandably concerned sister (a sympathetic Michelle Thrush) escorts him by train to a veteran’s hospital in Kansas for diagnosis and, hopefully, treatment.

One of the most refreshing and rewarding aspects of the movie—aside from its former rigor and respect for the audience’s intelligence—is how Desplechin and his co-writers portray the staff doctors at the VA hospital. Instead of the usual gaggle of sadists and incompetents, they’re genuinely decent, caring professionals with a vested interest in curing Jimmy. To that end, they enlist the services of unorthodox French therapist Devereux even though he’s not on the army’s payroll. Because Devereux is an expert on Native Americans (he’s spent a lot of time studying Indian tribes in the American Southwest), the VA doctors think he’d be a perfect match for Jimmy.

Much of the film’s second half consists of Devereux’s Freudian-influenced sessions with Jimmy, and they’re glorious to behold. They also bring out the best in del Toro, Amalric and Desplechin. Talk is something Desplechin has never shied away from (see “How I Got Into an Argument…”), and he continues to regale in the intricacies of language. Rather than devolving into specious psychobabble or clinical-speak, the doctor/patient back-and-forth helps lower the bar between the two men so they can meet on something like common ground.

Jimmy and Georges are, naturally, the focal point of the movie, but Desplechin makes room for an especially intriguing supporting character played by newcomer Gina McKee. As Madeleine, Georges’ married British lover who visits him in Kansas for an extended stay, the delightful McKee steals every scene she’s in. Madeleine’s eloquent and moving parting address to Georges, spoken directly to the camera, is a tour de force for both McKee and Desplechin.

In a different era, “Jimmy P.” would have been distributed by a major Hollywood studio and rightly been considered an Oscar front-runner. Today, sadly, it’s relegated to a blink-and-you’ll-miss-it release by indie stalwart IFC Films.