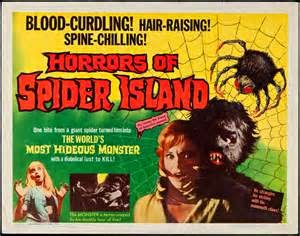 HORRORS OF SPIDER ISLAND is a 1959 badfilm obscurity that I mainly knew from an evocative old Famous Monsters of Filmland cover. Forrest J Ackerman made it look far better than it ever could be. In some parts of the world it was called HOT IN PARADISE, or, variously, IT’S HOT IN PARADISE or A CORPSE HANGS IN THE WEB, but in a more descriptive moniker is became HORRORS OF SPIDER ISLAND.

I downloaded HORRORS OF SPIDER ISLAND in all its MPEG glory. Wow, I am speechless. Sort of a West German-Yugoslavia badly-dubbed horror take on what would be a 1959 Sports Illustrated Swimsuit Issue. Plot has eight dancers/strippers and one male manager en route to a Singapore showbiz gig surviving a plane crash and getting marooned on a lonely Pacific island.
Just from seeing a hammer lying around, the guy boss deduces that there’s a uranium deposit on the island. The girls ask if uranium is edible. I think I would have liked to have been around in those day. It would’ve increased my chances of landing a decent job. Today such women would summarily get hired over me in Cleveland. 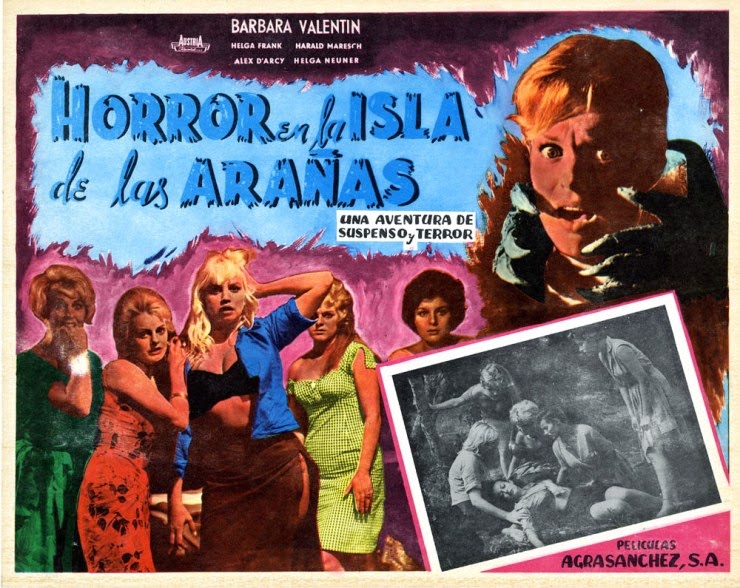 Possibly because of the uranium, the island has a population of mutant foot-long puppet spiders, who look kind of the Zanti Misfits from the old Outer Limits show. On one hot night when the girls are all stripping their clothes off to sleep, the lone man is unlucky enough to be bitten by one (spider, I mean).

He mutates into a furry-faced fiend with clawlike hands and only three fangs. From time to time he stalks and kills remaining humans on the island. But he’s not really all that much on the characters' minds, as a few sailors come ashore as well and have time to flirt with the girls and hold a bikini dance party before the denouement, involving quicksand. 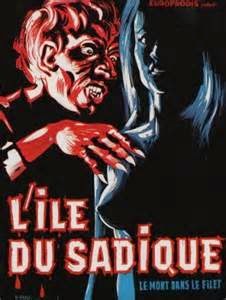 Let’s see… Radioactive spider-bite produces human mutation, sort of like a “spider-man,” hmm… I know Cleveland filmmakers who, merely based on that, would definitely file lawsuits against Stan Lee and Steve Ditko and Sony/Columbia and Brian Michael Bendis, demanding archipelagoes of cash for ripping them off on this junk. But SPIDER ISLAND director Fritz Bottger, using the pseudonym Jaime Nolan (never trust showbiz folk who change their names) never did so, to my knowledge. Really though, it’s a horrible horror effort that I heard got a deserved Mystery Science Theater treatment.

Well, at least the Eastern-European actress are pretty in the non-anorexic1950s voluptuous tradition, and I do hope most of them dropped out of acting to pursue more decent and honorable careers, like going to work for the KGB or the Stasi or something to be Cold War honey traps.

Blonde, Valkyresque Barbara Valentin, in her first major role here, rose to some fame as Austria’s answer to Marilyn Monroe. Fraulein Valentin later appeared regularly in the cinema of Rainer Werner Fassbinder. She was also a lover of rock superstar Freddy Mercury, who raved about the quality of her breasts (and this guy was gay, from what I understand; those must’ve been some breasts). 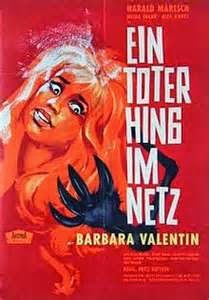 But, I understand, Valentin got banned from attending his funeral. Maybe before the ceremony Brian May found a VHS of HORRORS OF SPIDER ISLAND and alerted security. See girls, those early movie roles you did for money WILL come back to haunt you. Or Barbara Valentin is now universally disliked by musicians; Yoko Ono can’t get all the haters.(1 out of 4 stars)