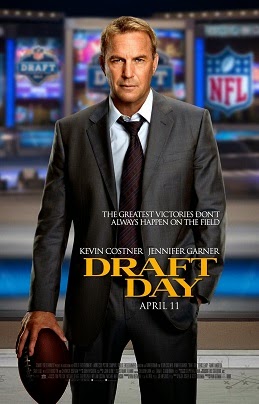 Are you ready for some football?

Are you ready for some Cleveland Browns football…in April?

Yes, thanks to modern movie technology, filmmakers can do just about anything:  They can make Superman fly, resurrect the dinosaurs, transform a mild-mannered scientist into a raging Hulk, and yes…director Ivan Reitman (STRIPES, GHOSTBUSTERS) can turn the perennially-losing Brownies into a champs just in time for Easter dinner.

New sports dramedy DRAFT DAY focuses on one beleaguered NFL general manager’s attempt to parlay his #1 draft pick into a brighter future for his downtrodden team.  Originally, the Buffalo Bills were to be the focus of the film.  Fortunately, Ohio’s generous film tax credit lured Reitman’s production to town, where it was decided Cleveland should be shot for Cleveland.  The filmmakers saved about $5 million, and made us look great in the process.

The switcheroo factors heavily in the film’s effectiveness.  There’s more tension to milk when converting an outrageously inept squad into proper gridiron gladiators, and Lord knows no team has been less effective on the field in the last three or four decades than our very own Brownies, Woof! Woof!  But strangely, beautifully, there also isn’t a more devoted fan base anywhere in the NFL, and Cleveland’s unconditional love for our orange-helmeted Dawgs spills over into every other scene.

Heck, at least the Bills have made the Big Dance, appearing four times 1990-1993.  The Browns have never made the Super Bowl and don’t look like they ever will.  All the more reason for Reitman to have changed jerseys and upped the ante; there’s no underdog more under or Dawg than Cleveland.

Sonny Weaver, Jr. (Kevin Costner) has but a single day to make all the right moves for his underperforming fictional Browns.  The GM wakes up with a relatively low draft number—someone more football-savvy than myself can explain how all that works—but a lot can happen in twenty-four hours, most of which Sonny spends on Sisco office phones and intercoms, wheeling and dealing with rival managers (Wallace Langham, Patrick St. Esprit) and coaches (Sam Elliott), and placating underling staffers.  Browns owner Harvey Molina (Frank Langella) is breathing down Sonny’s neck, ready to cut ties should the struggling GM fail to recruit a college “red shirt” who’ll make a splash next season.  Molina even uses that exact metaphor while threatening Sonny’s job as they stroll though an empty water park.

Sonny feels the pressure:  His father was a winning, well-liked coach before illness prompted his retirement, and few in the Browns community are convinced Sonny Jr. can live up to the legacy.  Moreover, Sonny’s live-in girlfriend Ali (Jennifer Garner) wants to take their relationship to the next level.  The manager’s got enough on his mind already, but he’s unable to escape his sweetheart because she’s also the Browns’ top number-cruncher.  Ali’s salary computations (and gut impressions) are paramount in Sonny’s strategizing, so she might as well work in a little “What about us?” here and there, even if that means dragging Sonny into broom closets to ensure his undivided attention.

But Sonny’s personal and professional lives are blurred before he even leaves home.  Sports radio DJs mock his tenacity over the airwaves, agents solicit on behalf of their college and pro-ball clients like pimps in Armani suits, and Browns head coach Vince Penn (Dennis Leary) insists he’ll move back to Dallas if Sonny doesn’t provide worthwhile players.  Sonny’s widowed mother (Ellen Burnstyn) chooses today—of all days—to drop in and demand that his father’s ashes be spread on the practice field out back.  Loveable old Barb Weaver can’t get Ali’s name right, but she’s as up-to-date as any Browns diehard when it comes Sonny’s prospects, thanks to Twitter.

“You’ve given away our future!” comes the wave of protest.

Sonny can’t believe his luck…or lack thereof, as it happens (nor does anybody around him).  He exasperatedly sighs and rolls his eyes throughout the afternoon and early evening, loses his cool on the determined, recuperating Drew, and smashes a laptop belonging to puppy-like intern Ricky (Griffin Newman).  A couple heart-to-hearts with Ali and dear old mom help set him straight in time for the big show.

The NFL teams dispatch delegates to Radio City Music Hall, where ESPN is broadcasting the draft live on air.  Sonny sends reps to New York, too, but stays home with War Room confidantes to iron out last-minute details and call in his pick.  At the designated time, the Browns are officially “on the clock,” and Sonny’s got precisely ten minutes to cough up a name.

What he (and Reitman) does with those ten minutes (and the ones immediately thereafter) is nothing short of magical, and it’s a credit to Reitman and his writers that this sequence packs so much suspense and emotional impact—even for folks who ordinarily couldn’t care less about watching football, much less tuning in to the NFL draft.  But to divulge anything more about the electrically-charged, neon-lit, confetti-filled finale would risk letting a bunch of adorably cute kittens out of Maestro Ivan’s gold-dusted burlap bag.

Suffice to say, DRAFT DAY spotlights not only the Cleveland Browns but Cleveland…The Town.  When the action cuts from one city to another we’re given overhead shots of their skylines with game-day style graphics (e.g. “Seattle: Home of the Seahawks”), so Cleveland’s familiar, oft-maligned horizon is rendered frequently—from advantageous angles, thankfully—as a cinematic postcard.  We visit the West Side Market, watch Costner tank up at a gas station in The Flats, zoom over First Energy Stadium on the Erie Shore, and root with fellow Dawgs at local pubs.  Cleveland features in DRAFT DAY almost as much as CAPTAIN AMERICA: THE WINTER SOLDIER, only there’s no disguise needed here, since our buildings and ballparks are presented as-is, instead of doubling for nondescript intersections in New York and D.C.

Costner may be playing an NFL general manager here but he’s still in the rumpled-but-redemption-ready “everyman” mode that’s served him so well over the years.  It’s true that his role—and DRAFT DAY—will do for football what Brad Pitt and MONEYBALL did for Major League baseball, but this picture is less about a selection process than how well one man’s convictions hold up within (and against) head-scratchingly complex system.  Costner’s team-architect is less concerned with stats and star power than with personal character; he not only wants great players for the Browns but good people, too.  Assholes need not apply.  A post-it note introduced early on becomes a surprise MacGuffin / talisman embodying Sonny’s unwavering do-right spirit, and it’s truly touching when the memo pops up later.

An avid student of the “while you see a chance, take it” philosophy advocated by Professor Winwood in his ARC OF A DIVER lecture series, I applied for—and landed—a part as an extra when production rolled into town last summer.  The first of my two days on set was spent pretending to be a Browns office employee, just loitering in a hallway while Costner and Garner talked business.  Reitman ultimately decided the scene was “too busy” and eliminated several extras, including me (I was in Garner’s way).

My second day in Beachwood was more fortuitous; I “played” a Kansas City executive who passes through the office reception area as Chief s GM Pete Begler (Wallace Langham from CSI) chats with Costner on the phone.  We did a dozen or so takes, one of which made the cut:  In a blink-and-you’ll-miss-it-moment, I can be seen walking into another room behind Langham’s right shoulder.  No words, no SAG card.  Next time, baby.

I could tell you I maintained objectivity writing this review until I’m blue in the face (or the Browns actually collect the Vince Lombardi Trophy), but there’s no downplaying the “cool factor” of a movie geek weaseling his way into 1) a big-budget Costner flick 2) about the Browns 3) directed by childhood hero Reitman.  Plus, editor Bob Ignizio gave the go-ahead on my review—so thanks, Bob!

My DRAFT DAY bit lasts all of 1.5 seconds in the movie, but for two entire days I “worked” on set at the fake Browns headquarters (Tri-C campus), getting a feel for the labor that goes into transforming a screenplay into sounds and images onscreen.  For every Jennifer Garner, there are a dozen technicians, makeup artists, soundmen, gaffers, prop handlers, and caterers getting things ready—and whose names will appear in tiny letters in the credits, if at all, and I gained newfound respect for them and their craft.

No, we didn’t meet Costner, Leary, or Garner.  We didn’t chat with Langham at craft services after our scene, or have words with Reitman (beyond his telling me “You were a beat late there.”)  No autographs or photo-opps.  Apart from being verboten on-set, doing so would have been patently un-cool.  We kept to ourselves.  The folks in Beachwood were professionals, through-and-through, wardrobe to cameraman.

But the nicest part in all this is (having seen the finished product nine months later, like a proud papa) I can honestly say DRAFT DAY is a very good movie instead of some throwaway cinematic eye-trash.  And we’d much rather enjoy an insignificant part in a solid piece of entertainment made by people who actually cared about it than slink in shame over a big role in someone’s piece of shit.

DRAFT DAY is funny, unexpectedly heartwarming, and nail-bitingly tense—a grand slam these days, especially considering there’s nary a gun, karate kick, or superhero cape in sight.  And that’s the highest recommendation I can give, really:  My wife, parents, kids, and colleagues would—and will—like this film even if I kept mum about my participation in it (not a chance).  DRAFT DAY is a solid sports flick that (to quote ROCKY III) stands in tribute to the indomitable spirit of man (particularly Cleveland men—and women), whether he’s hauling tail across the 50 yard line or sweating it out on a cell phone.