Child's Pose (April 4th and 5th at the Cleveland Cinematheque) 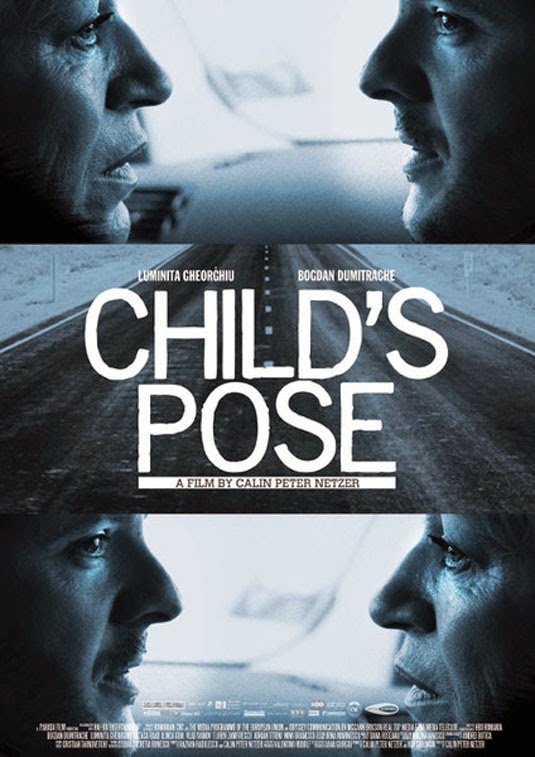 The Romanian New Wave that caused such a worldwide sensation less than a decade ago with masterpieces like Christian Mungiu’s Palme d’Or-winning 4 MONTHS, 3 WEEKS AND 2 DAYS and Christi Puiu’s THE DEATH OF MR. LAZARESCU has been rather quiet of late, at least in the U.S. Mungiu’s excellent BEYOND THE HILLS barely made a ripple in domestic arthouses last year, and Calin Peter Netzer’s CHILD’S POSE doesn’t seem likely to buck that recent trend.

That’s a shame because Netzer’s film is among the more accessible Romanian imports to date. The story of a mother (the fierce Luminita Gheorghiu) whose, uh, parenting skills leave a lot to be desired, POSE bears all the earmarks we’ve come to expect from contemporary Romanian cinema: a gritty, almost documentary-like texture, handheld camera work and performances whose immediacy and exacting rawness echoes the no-holds-barred thesping in the films of the late John Cassavetes.

Gheorghiu’s Cornelia has the sort of love/hate  relationship with grown son Barbu (Bogdan Dumitrache, very good) that, on the surface anyway, almost seems incestuous. She disapproves of nearly all Barbu’s life choices (career, romantic, you name it) and is none too shy about letting him know it. At the same time, she curries his attention/favor like a coquettish lover.

After a traffic accident which results in the death of a young boy (perennial screw-up Barbu was behind the wheel), Cornelia essentially commandeers her son’s life. Even though she’d be loathe to admit it, the accident is like a gift from the gods since it essentially makes Barbu dependent (solely dependent) on her again. Cornelia deals with the cops, hires a lawyer, bribes an eyewitness and even pays an unsolicited visit to the dead child’s grieving working class parents. Her Milquetoast husband, Aurelian (Florin Zamfirescu), is essentially a bystander in his wife and son’s lives. Judging by their echt bourgeois style of living, his only job is to pay the bills. (Which, apparently, he does very well.)

Barbu and Cornelia’s push/pull relationship (the more she pushes, the more he pulls away) is an epic battle of wills, but there’s never any doubt who has the upper hand. If the Romania seen in the movie bears an uncanny resemblance to present-day Russia, Cornelia is its bullying, braying Putin-like leader and Barbu her own personal Crimea:  something to be conquered and put under strong-arm control, preferably for life.

Whether Medea or Cersei Lannister, monstrous mother figures have always been a staple of popular art, and Cornelia ranks among the baddest of the bad. What’s most impressive about Gheorghiu’s superb performance is that it never descends into Cruella De Vil (or “Mommie Dearest”) camp. Netzer and Gheorghiu refuse to deny Cornelia her basic humanity. Or plead for our sympathy, which might be the bravest choice of all. The final scenes of recrimination between mother and son are wrenching because they’re so unexpectedly moving. 3 out of 4 stars.

Posted by Milan Paurich at 3:23 PM