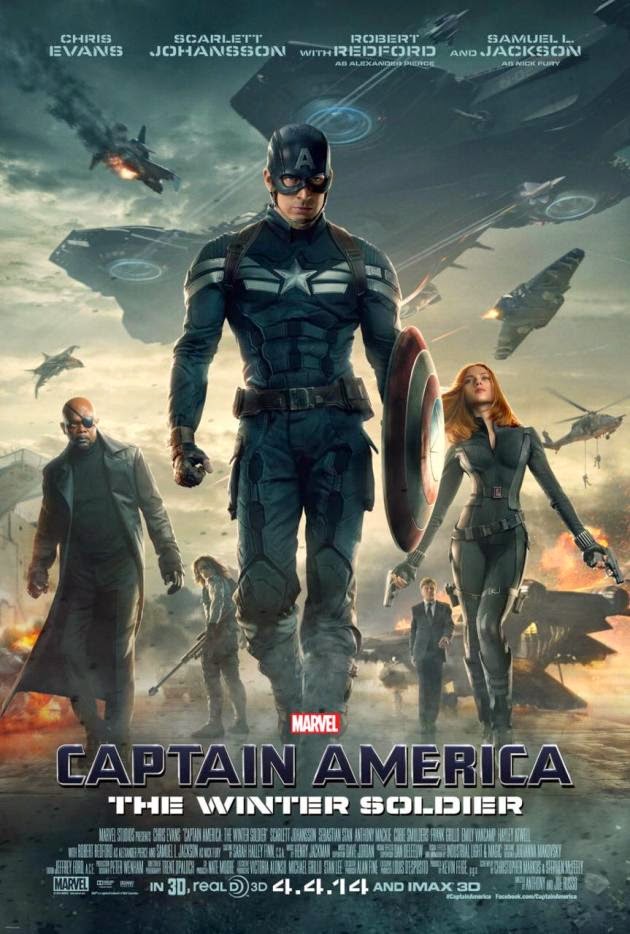 Production for CAPTAIN AMERICA: THE WINTER SOLDIER snarled Cleveland traffic for an entire month last summer.  Directors (and Shaker Heights natives) Anthony and Joe Russo (WELCOME TO COLLINWOOD) clogged several main arteries and major intersections in hopes of capturing a bit of the superhero celluloid magic that’s become standard for Spring / Summer blockbusters over the last fifteen years.  Were the rush-hour headaches worth it?

Depends on who you ask.  The movie—the latest installment in Marvel’s ongoing AVENGERS-related saga (and third major superhero flick partly shot in C-Town, counting SPIDER-MAN 3)—won’t sway those who never cared much for cartoon heroes, comic books, or the lure of Hollywood spotlights in the first place.

I get that the tie-ups and detours sucked.  My main office is downtown, right where a lot of the action in CAP 2 transpires.  But I grew up watching superhero cartoons and collected comics (mostly Marvel titles) in the ‘80s, so it’s been a surreal, if belated (and somewhat guilty), pleasure watching pen-and-ink pulp legends like Spider-Man, Wolverine, and Punisher light up the big screens in ways we never thought possible when I was a kid.

My enthusiasm stems not merely from the fact that CAP 2 is a solid AVENGERS “Phase Two” entry with requisite action bits and assorted eye-candy, but also from the film’s standing as one of the best superhero films ever made (which I understand is saying a lot, so soon after THE DARK KNIGHT RISES and MAN OF STEEL).  With this picture, the Brothers Russo turn in not only a hefty hunk of lip-smacking escapist entertainment, but one whose story and themes address important elephant-in-the-room issues about our supposed “free” existence in a post-911 world.

Steve Rogers (Chris Evans) is still acclimating to 21st century life after being defrosted from seven decades of hibernation at the end of CAPTAIN AMERICA: THE FIRST AVENGER.  We learn he’s chronologically 95 years old, but he looks 27 and (thanks to an injection of super-serum back in the 1940’s) boasts the physique of an Olympic athlete.  Cap’s grown comfortable with his enhanced speed and strength (and runs Bionic Man-like laps around his Washington, D.C. environs), but he’ll need more time to absorb the social and technological advancements of the Internet age.  He lives in a modest apartment (next to a suspiciously curious nurse) and still listens to swing music.  When people suggest something of cultural import for Steve to check out (like a Marvin Gaye album or ROCKY movie), he pencils it in an old-school notebook, not an iPod.

In one of the film’s few truly poignant scenes, Steve’s reunited with World War II love interest Peggy Carter (Hayley Atwell), who is now elderly and bedridden.  During the misty-eyed exchange, we learn Cap’s “best girl” helped launch counter-terrorist organization S.H.I.E.L.D before her retirement from the Strategic Scientific Reserve.  Cap’s been working for that agency—now headed by Director Nick Fury (Samuel L. Jackson)—ever since they thawed him out, but a nighttime raid on a merchant vessel seized by Algerian pirates sets in motion a chain of events that eventually reveals a legion of double-agents buried deep within S.H.I.E.L.D.’s rank-and-file.

“This isn’t freedom,” he deadpans, surveying a cavernous warehouse of weaponry.  “This is fear.”

Fury reminds Steve they don’t have the luxury of waiting for terrorism to occur. “We take the world as it is, not as we want it to be,” he says.  But the line separating good from evil is blurred when a regiment of assassins (disguised as D.C. metro police) ambushes Fury in his SUV.  The hit-men have a super-powered leader who, like Cap, hails from yesterday:  The shadowy, mechanical-armed Winter Soldier.   Steve senses something familiar about the fellow, and it’s nothing to do with the moppy hair, dark eyes, and ill temper—all of which render Winter Soldier something of a Nine Inch Nails dropout.

Cap and fellow Avenger Natasha “Black Widow” Romanoff (Scarlett Johannson) are declared fugitives by their S.H.I.E.L.D. employers, and their former S.T.R.I.K.E. team associates—headed by brawny Brock Rumlow (Frank Grillo)—relish the chance to hunt the heroes down.

Steve suspects a computer flash drive confiscated from the steamship thugs might provide answers.  The data leads to an abandoned (but eerily familiar) army base outside New Jersey, in whose secret underground lab a certain ex-nemesis has had his cerebral functions electronically preserved.  Steve and Nat start unraveling the mystery behind the agency they thought they knew, but an air strike nearly obliterates the ambiguously romantic couple.

Fortunately, Steve’s taken in by jogging buddy Sam “Falcon” Wilson (Anthony Mackie), an Iraqi serviceman who reconciles his own war guilt by counseling other PTSD-afflicted veterans.  Sam agrees to help Steve and Natasha infiltrate S.H.I.E.L.D. and prevent the Helicarriers from triangulating and raining death along the East Coast by donning an experimental rocket pack and Da Vinci-esque wings.  Steve, Nat, and Sam—now in full-on Cap, Black Widow, and Falcon mode—are each assigned a carrier to disable and given a microchip to stop the timers.  The only thing standing in their way is, well, everything and everyone—unless Cap can convince the world otherwise.

Charged with Cold War-like paranoia, CAP 2’s darker first half out-muscles the incendiary—but less substantive—second.  It’s not easy maintaining continuity in the increasingly unwieldy Marvel cinematic universe, but the Russos and their writers somehow distill a lot of comic-borne mythology into one brisk, engaging caper replete with jaw-dropping car chases, shootouts, and fistfights.  Colbie Smothers is back as S.H.I.E.L.D. Agent Maria Hill.  Vice President Rodriguez (Miguel Ferrer) and Senator Stern (Gary Shandling) reprise their IRON MAN roles (with the latter wringing an additional chuckle from a lapel pin joke).  LOGAN’S RUN hottie Jenny Agutter returns as a World Council Member, and Marvel head honcho Stan Lee makes another now-obligatory cameo.  And the Russos do a nice job calling back Cap’s personal journey in each of his first two appearances via flashback and clever exposition:  If you forgot what happened the first time out, the film’s built-in visit to the Captain America Smithsonian exhibit will bring you up to speed on his origins.

We were impressed with the staging and choreography of the many fight scenes, all of which evince the combatants’ hyper-athleticism and martial arts training.  The brawls happen fast and suffer from a bit of shaky cam syndrome on screen, but at least the Russos honor the laws of superhero physics:  When the physiologically superior Captain America strong-arms a “normal" human henchman or kicks a crook, they go flying as if blindsided by Mack trucks.  Steve isn’t bashful when it comes to using firearms and cutlery (he pins a gunman’s hand to a wall with a knife) but his go-to accessory is still his trademark shield, which he boomerangs off bulkheads and ricochets off rafters.  Black Widow, Falcon, and Fury get their licks in, too, and it’s downright giddy.  We lost count of how many times people jumped off building or were blown through windows.  The automobile incursions are executed with the proper balance of merriment and finesse, and Cap’s elevator fight here surpasses John McClane’s bloody escape from the “lift” at the Federal Reserve in DIE HARD WITH A VENGEANCE.

Cleveland comic fans will drool at the number of downtown buildings and landmarks on display.  The slugfest between Cap and Winter Soldier on Lakeside will turn the Justice Center’s front plaza into a tourist attraction.  Cap’s blown through a bus beneath the Shoreway overpass on W. 3rd (and almost reduced to Swiss Cheese by bullets).  The Fairview Bridge is the setting for a spectacular motorcycle getaway, but is barely recognizable post-CGI effects.  The intersection of E. 9th and Euclid may now be regarded as Marvel’s “ground zero” for mayhem (look for the Capital Building digitally painted in where Cleveland State’s Fenn Tower would be).

But what resonates most about CAPTAIN AMERICA: THE WINTER SOLDIER is not its abundance of munitions, but its mature handling of trust and loyalty in tumultuous political times.  The plot reminds us that sometimes the real “villains” might ride in squad cars decorated with slogans like “To Protect and Serve,” or might even hold seats in Congress.  Bona fide “heroes” can pop up anywhere.  It’s just a matter of doing the right thing when it counts most.

Oh, and be sure to hang out past the first few credits for a sneak peek at two potential new AVENGERS. 3 out of 4 stars