A Q&A with Spike, of Spike & Mike’s Festival of Animation (screening April 11th, 12th, and 13th at the Cleveland Cinematheque) 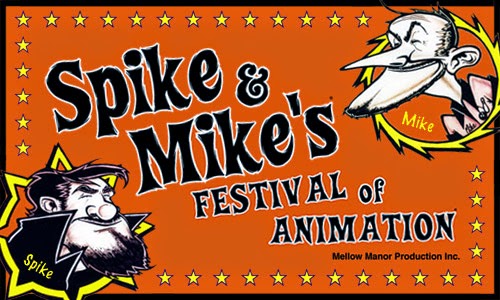 Ever since LeBron James left, the only significant thing about Cleveland, we can all agree, is the Cleveland Cinematheque, a venue of fine alternative cinema in University Circle.

But…now that there’s little or no chance LeBron will ever stop by, the only thing really significant about the Cleveland Cinematheque is that it regularly shows entries in the “Spike & Mike’s Festival of Animation.” This is a touring compilation that was originally put together in 1977 by rock musicians Craig `Spike’ Decker and the late Mike Gribble (d. 1994). They started showing cartoons interspersed with their sets in the band Sterno and The Flames, and they ultimately began exhibiting the animated shorts all by themselves.

The semi-regular Spike & Mike festivals have since come in two flavors – this, the `classic’ festival of new entries in general animation (which the Cleveland Cinematheque hasn’t shown in about ten years – so maybe that’s why LeBron left after all) and their “Sick and Twisted Festival of Animation,” a Cinematheque perennial.


The 2014 edition of the Festival of Animation is a knockout by any viewer standards, running the gamut from the stop-motion visual pun “At the Opera,” by Juan Pablo Zaramella, to the must-be-seen-to-be-believed line-art transformation/tributes of Andreas Hykade’s non-narrative “Love & Theft.”

There’s a wonderful retro-style piece set to the music of the Squirrel Nut Zippers’ “Ghost of Stephen Foster,” and the sardonic portrait of romantic obsession “Eleven Roses,” by Pedram Goshtasbpour and his team of CGI wizards, blends photo-realistic digital with line-art renderings inspired by the great cartoon-caricaturist Al Hirschfeld. It’s so well-synced to a Tchaikovsky masterwork you’d swear the Russian composer knew all along that digital animation was coming.

Overall, this 2014 Spike & Mike’s is the best night at the movies you can have in Cleveland. And yes, we’re counting CAPTAIN AMERICA: THE WINTER SOLDIER (unless LeBron is in the auditorium).

The Cleveland Movie Blog was recently privileged to interview Decker. Too bad we don’t have audio; someone could’ve animated it:

Q: Just because it’s Cleveland, I’ve got to ask: Do you or the late Mr. Gribble have any personal ties to this region? I am given to understand you and Mike originally began showing cartoon shorts in between sets of a band you had. Did that band ever play Cleveland? We like to fancy ourselves the Rock and Roll Capital (although Paul Allen disagrees and he has more money).
A: No I cannot say 'Sterno and the Flames' played in Cleveland, but I do hope they put our good friend 'Weird' Al Yankovic in the Rock Hall of Fame someday.

Q: I seem to remember a few similar feature short-animation compilations in theaters around the era when you started, THE INTERNATIONAL TOURNEE OF ANIMATION (which I had the luck to catch at the Nuart) and I think the FANTASTIC ANIMATION FESTIVAL. Not to mention ALLEGRO NON TROPPO in regular revivals. And there was that PBS-TV half-hour of contemporary animation hosted by Jean Marsh. Were these influences on you, or lessons in what to do/what not to do?
A: They were influences on what someone should and should not do, yes, but they were not the primary influence. Anything that got me into entertainment was my voice, which I did bass vocals in Sterno and the Flames. This, then, stemmed into animation by showing all the great Max Fleischer pieces (Superman, Betty Boop, etc). As far as ALLEGRO NON TROPPO, Bruno Bozzetto has now become our good friend, and that particular title is in my top two favorite animation pieces of all time.

Q: How easy/difficult was it for you to book your collections into theaters starting out? I might imagine you had a few non-traditional venues?
A: Yes. For many years we never intentionally played movie theaters because we had heard that you will not get paid unless you have another show to use as leverage to possibly get paid for the first one. We only did performing-arts centers, universities and some other very strange places. We also had a show one night at the Luaden Nelson Center in Santa Cruz that was scheduled one hour and a half after the big earthquake in 1989. We have also had our films projected onto snowbanks during the Slamdance Festival at the Sundance Film Festival.

Q: How does S&M work? How much of the Spike & Mike collections are scouted out by you and your minions and how many are submitted directly from the talent, via your website?
A: It’s fifty-fifty.

Q: Are your feature compilations always annual, or whenever you have a critical mass of stuff accumulated?
A: It’s both.

Q: I think you fellows may have shown “Tin Toy,” “Luxo Jr.” and other early Pixar efforts, Bill Plympton’s “Your Face,” Nick Park and other Aardman entries, and Matt Stone and Trey Parker’s “The Spirit of Christmas,” if that last one wasn’t more of an early viral-video sensation. What/who would you say was the first animation (or animator) to achieve breakout success mainly due to Spike & Mike?
A: As far as animator to achieve breakout success, the first that come to mind are: John Lasseter, Andrew Stanton and Pete Docter as well as Nick Park [additional high-profile entrants have included Mike Judge, Craig McCracken, Marv Newland, Brad Bird, Will Vinton, Tim Burton, and “Celebrity Deathmatch” creator Eric Fogel]

Q: I can’t imagine animators saying no to exposure, but were there any ones-that-got-away animated shorts you just weren’t able to get hold of to exhibit?
A: Yes. We tried desperately to get the first interstitials from The Simpsons that were on The Tracy Ullman Show.

Q: When did the regular Spike & Mike’s Festivals of Animation splinter off into the Spike and Mike’s Sick & Twisted Festivals of Animation?
A: It was 1989 or 1990. We were doing a show at UC-Berkely and we tested a few of the Sick and Twisted shorts on a sold-out, hardcore party-college crowd. We tested it again the next night and it went over really well again. I told Mike we had a concept - all we need to come up with is a brand. So we came up with Sick and Twisted and then started producing some Sick and Twisted content, because not a lot existed at the time.

Q: What determines which shorts go into which? The general tone of fare in both seem fairly offbeat to me. Of the 2014 Festival of Animation shorts, I could imagine. “Captain Awesome Episode 13” (a superhero struggles with an epic bathroom emergency) or “Key Lime Pie” (noir parody in which a doomed protagonist gives his life for a dessert) or even “Lapsus” (a simply-drawn nun encounters a zone of darkness that divides and mutates her into her component geometric B/W shapes) considered pretty twisted.
A: Generally the original or classic show, always followed very closely to the Oscar films, are very intellecutal and artistic – state-of the art films but still with an emphasis on humor. A Sick and Twisted was at first just straight gross out, but it has now evolved into films that have a sick and or twisted edge to them but are much more refined and clever than some of the first films we did.

Q: Inevitably, I must ask: Do you have any animation/cartooning experience yourself? Did Mike Gribble?
A: I have done some voices and I have helped with concepts and ideas for the films we produced.

Q: If you could imagine yourself as a career animator, is there any individual or technique whose example you might have followed?
A: No, but I would follow John Lasseter's technique and brilliance of the industry to the moon.
Posted by Charles Cassady Jr. at 12:00 AM