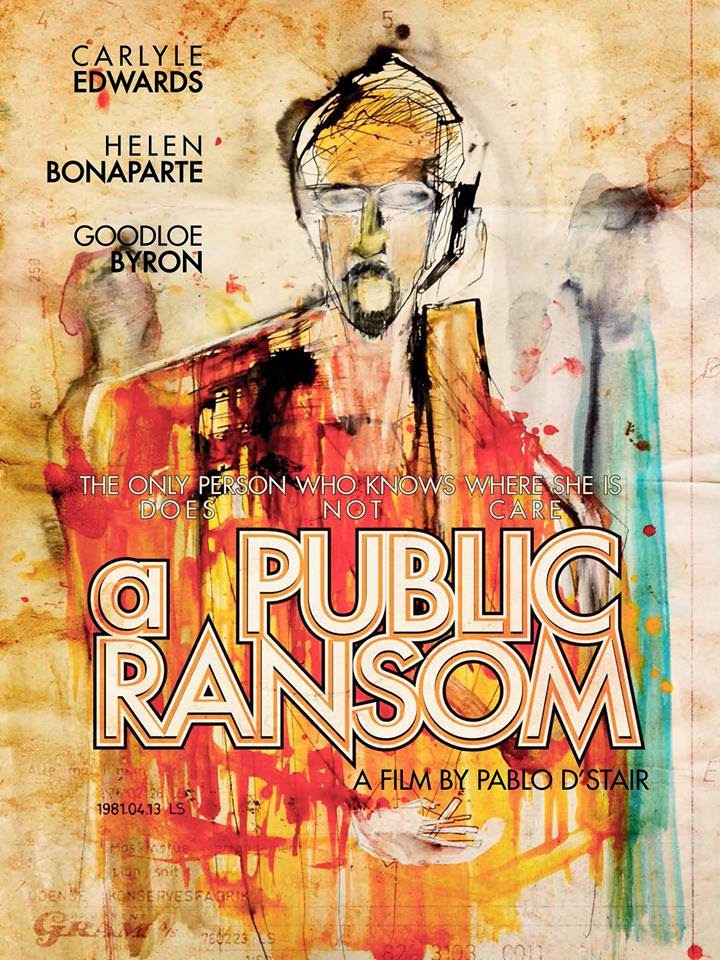 Based on a short story written by D’Stair, RANSOM follows self-obsessed, malcontent author Steven (Carlyle Edwards), who, after self-destructing his marriage, finds a crudely drawn flier with a phone number and a crayon-scribbled message: “HLEPP ME?” An indifferently curious call to the number leads him to Bryant (Goodloe Byron), a fellow writer who claims to have kidnapped a random child, who he will release if Steven ponies up $2,000. Steven initially regards Bryant’s claim as no more than a sick joke, but things start getting weird when Bryant suddenly begins dating Steven’s best (and only) friend Rene (Helen Bonaparte).

Far and above, the film’s strongest component is the writing. The sinister allure of the eerie poster, the mystery of Bryant - an innocent child’s devilish could-be captor - and Steven, the unlikely, foul-mouthed lout around whom the mystery orbits combine to form an interesting, if not entirely original, amorality tale that explores the question of whether informed inaction is ever more ethically repugnant than concerted wrongdoing.

Intriguing as D’Stair’s story may be, stories can be told in any number of media. Watching A PUBLIC RANSOM, I repeatedly wondered why D’Stair chose film, especially given that some version of RANSOM already exists as a piece of prose fiction. The movie’s shooting style seems intent on echoing the inaction of its protagonist – every shot finds the camera stock-still and rolling for upwards of five minutes as characters stand in non-descript locations and exchange what must have been pages of dialogue.

There are also plenty of scenes in which Steven skulks around urban anonymity carrying on lengthy cell phone conversations of which we only hear his side. It’s actually an effective device to drive home the character’s self-centered worldview, it just gets a bit tedious to watch once that theme has been (thoroughly) wrung out.

This laissez-faire blocking combined with the black-and-white palette create a stark simplicity almost akin to home video of a stageplay. Sure, it’s an audacious commitment to naturalism, but it foists all the heavy lifting onto the actors and their performances. And it’s RANSOM’s undoing. Even ignoring the concerted unlikability of Steven as a character, Edwards’ awkward, gesture-heavy performance is no match for the biting, prolific dialogue.

Of course, I can’t let D’Stair off the hook completely. Clever though some of Steven’s repartee may be, D’Stair leans way too heavily on tiresome misogyny to reinvorce Steven’s douchiness. I’d challenge even the most accomplished thespian to deliver some of the lines realistically. I have no doubt much of the sardonic patter danced on the page, but on film it's all a self-conscious stumble.

At several points, even Byron, the film's best performer, can't make it through one of the interminable single shots without flubbing a line. That the mistake happened is Byron's understandable slip-up; that it stayed in the finished film is D'Stair's befuddling choice.

Ultimately, the director’s style works best when edited into simple montages and paired with the film’s groovy rock and indie soundtrack. The opening in particular crackles with life thanks to appealing visual integration of the credits and a driving instrumental from Detroit Cobras.

In A PUBLIC RANSOM’s press release, D’Stair cites visual influences such as Bresson, Fassbinder, and Jarmusch. I was reminded more of Kevin Smith’s CLERKS. That’s not necessarily a bad thing, but when combined with RANSOM’s attempted intellectual gravitas, the center simply doesn’t hold. That isn’t to say I wouldn’t like to see more of D’Stair’s work, I’d just rather see it in a bookstore than a movie theater (1 ½ out of 4 Stars).

Those interested can see the full film for free here.
Posted by Matt Finley at 12:00 AM