Zoolander (March 15th at midnight at the Capitol Theatre) 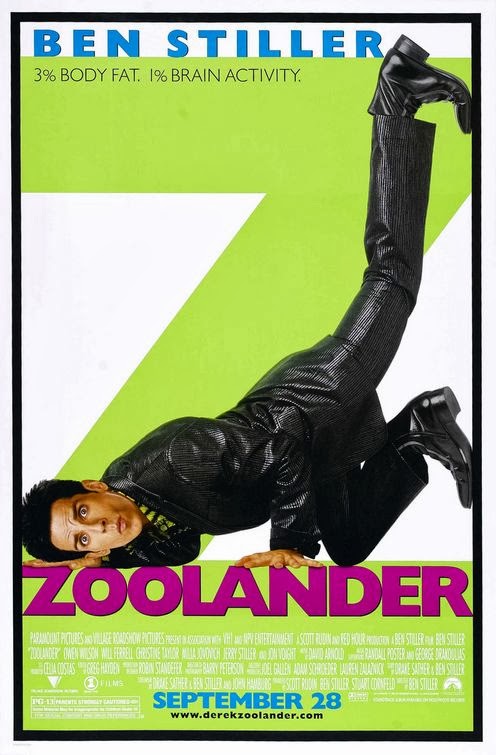 There's an inherent contrdiction in trying to do a smart comedy celebrating and uplifting stupid people (AKA most of what Adam Sandler does). In 2001's ZOOLANDER, Ben Stiller - nobody's fool as actor/satirist, here doing directing chores as well - sends up the narcissistic world of modeling and fashion in a funny vehicle modestly profound at plumbing the depths of shallowness. ZOOLANDER is the humor equivalent of junk food, as it goes down quickly and easily and entertainingly. Nutritional worth is
questionable.

Derek Zoolander (Stiller) is the world's most successful male supermodel, a self-involved, semi-literate simpleton whose talents are limited to striking a pose, attending parties, and affecting a billboard-worth facial expression called "Blue Steel" (in other words, striking a pose). But after a hatchet-job profile by a grudge-bearing Time reporter Matilda (Christine Taylor), and losing the Male Model of the Year award to blond newcomer Hansel (Owen Wilson), Zoolander consider retiring from the looking-good business.

Unbeknownst to Derek (as are most things), he's been secretly selected by evil fashion designer Jacobim Mugatu (Will Ferrell, in campy Austin Powers supervillain mode), to be used to kill the prime minister of Malaysia, in a scheme to prevent tightening of child-labor laws in Third World clothier sweatshops. Call it THE MANCHURIAN CANDID-DOPE, as what little of Zoolander's brain there is gets washed in a "day spa," priming him as a hypnotized martial-arts assassin. His unlikely new allies, Matilda and Hansel, try to thwart the scheme.

After its premiere, right in the 9/11 aftermath, ZOOLANDER stuck surprisingly in the zeitgeist; you still hear references to "Blue Steel" all over the place, sometime I kind of attribute to our consolidated news-media corporations since then laying off a lot of the hard-news reporters but retaining (or outsourcing to the UK) the mincing fashion/celebrity/entertainment nerds and bimbo tastemakers, at whom this humor was most squarely aimed. Yet a similar fluff-brained pop-culture satire from the time, Universal's live-action remake JOSIE AND THE PUSSYCATS, is now largely and mercifully forgotten. ZOOLANDER is obviously better, but the two movies have an uncanny resemblence, what with the cartoon characters, prominent Apple Macintosh product placement, and a parade of glitzy celebrity cameos mocking their own Warholean glory - Donald Trump, David Bowie, Fabio, Billy Zane, Christian Slater, Tommy Hilfiger, Gary Shandling, Veronica Webb, and others, playing themselves.

But it's David Duchovny, referencing his X-Files role here as a conspiracy-spouting mystery man, that's the stunt-casting harkening back to the best of Stiller's sketch-comedy days on his self-titled, short-lived Fox TV show.

While ZOOLANDER keeps threatening to devolve into a bag of bits, stiller (along with co-writers John Hamburg and Drake Sather) manages to hold things together with broad spoofs of Mondo Modeling - a "walk-off" between Zoolander and Hansel is really hilarious. Still, if you want to see a sort-of-comedy on models, fashion and Beautiful People that truly draws blood, you'd have to go all the way back to John Schlesinger's bracing 1965 DARLING. Which is carbolic acid to ZOOLANDER's Kool-Aid flavored Evian.

Ben Stiller also keeps it in the family, with a deus ex machina role for this father Jerry as a supermodel agent "Maury Ballstein," and a cameo by his mom Anne Meara as a protestor. Leading lady Christine Taylor became Mrs. Stiller not long after the film shoot. Talk of ZOOLANDER 2 has been heavy in the geekosphere, especially now that Ferrell's people announced he's done with ANCHORMAN followups. It's not as if the culture has gotten any smarter. (3 out of 4 stars)