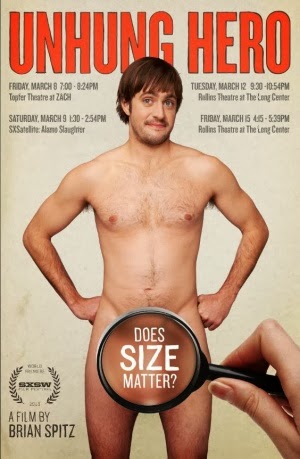 The SXSW Festival was just on, from what I hear. Pardon, but I don't go to this illustrious Austin display of music and film, not even on my laid-off reporter's press pass. At my level of income I can't even afford the Cleveland International Film Festival (and I used to work for them).

But every so often the attractions from both come my way via DVD. It does save on travel expense and the possibility of a plane crash (sorry, I just finally got around to see Tom Hanks in CAST AWAY, and don't feel much like flying, for maybe hundreds of years). And a SXSW "sensation" that arrived can now be savored by you home viewers as well, I guess. It's UNHUNG HERO. Brobably better known to others as that penis documentary.

UNHUNG HERO, though directed by one Brian Spitz, stars Patrick Moote, an aspiring actor/stand-up comic (possibly a raison d'etre for this film right there). He undertakes a personal, worldwide journey of discovery over his professed small penis and whether "size matters."

Patrick's notoriety stems apparently, from a rejected marriage proposal that was shown on the "kiss-cam", the big screen at a UCLA basketball game, and went viral online (if that's the case, Mr. Moote is the only person to whom that oft-sprung media hoax actually, really, truly happened). The turndown is ascribed here to Moote's girlfriend disgruntled at his meager male-organ dimensions.

Hence Patrick explores the $5 billion penis-enhancement business, in which South Korea predominates. Unsatisfied by pills, pumps and exercises called "jelqing" that are supposed to increase size, he travels to investigate a Malaysian condom manufacturer, a Korean sex theme-park, Taiwanese penile martial-arts and tribes in New Guinea, all concerning Patrick's plight.

But a lot of UNHUNG HERO is just schtick-y. "I look like a big, dumb idiot. People aren't going to take me seriously," emotes Patrick, costumed as a weiner for manhood-on-the-street interviews. Yes, tell us about it. Even sex columnist/author Dan Savage voices skepticism about Moote's movie project

Viewers should know that, while there is male frontal nudity and genitalia in clinical art and sex toys, Patrick's own appendage stays discreetly offscreen. For responsible opposing sleaze, there are some topless females in a fact-finding visit to the AVN Adult Entertainment Convention in Las Vegas. Funny thing I've noticed: just about all recent documentaries, short of Bill Moyers and Ken Burns, maybe, seem to find an excuse to drop in at the AVN Adult Entertainment Convention. Wonder why?

And even there, the legendary endowment of adult-film star John Holmes (inspiration for BOOGIE NIGHTS' Dirk Diggler) goes unmentioned. I guess I could reach hard (he-he, Charles said "hard") for more double-entendres and dick jokes upon which to end this review, but that fact just sort of speaks for itself. If UNHUNG HERO is the best one can expect from SXSW, I don't think I'm missing much. Oh, I guess I would go. If highly paid to, and able to get in free. But only really to escape Cleveland and its miserable winter. (2 out of 4 stars)